Round 3: Absolute Samuals Nürnberg vs. The Unusual Suspects

Share Article
Share Tweet Share
Samuals are a German team that have been going for a long time although the current roster is a little changed. Blech is better known for a good run on the Grand Prix circuit at the moment. Currently based in England, Blech has flown over to team up with former European Champion David Brucker and Dirk Hein.

The players were eager to go after the byes but had to wait for a deck check, ten minutes later the game could begin. 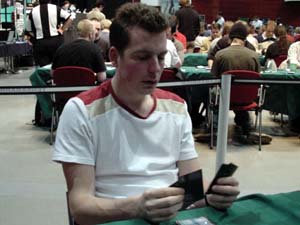 Gail, playing blue-white, started with a pair of Auriok Transfixers while Blech developed his mana with first an Iron Myr and then a Mask of Memory. While a Transfixer kept the Myr occupied Blech summoned the first threat, a Troll Ascetic.

Gail made a Mask of Memory but had nothing to put it on as his next play was a Pearl Shard. Blech copied the Mask with a Sculpting Steel but couldn't attack yet.

Gail summoned a Razor Golem. This tapped him out and allowed Blech to come in and march through the Golem with an Echoing Courage. Blech didn't have much to back up the Troll though as Gail finally found a creature his own Mask might be useful on - a flying Lumengrid Sentinel.

Blech upped the offence with a Fangren Hunter but couldn't stop Gail flying over to start abusing the Mask of Memory.

Gail only got to get one use out of it before a Tangle Spider nipped out to cut the flier off. Gail managed to save it with the Pearl Shard and a Razor Golem kept Blech at bay.

At this time Brucker went 1-0 up in his match.

If Gail drew artifacts he would find a way through the Spider. He missed and Blech started to gain the advantage as he made Mind's Eye.

A Solar Tide from Gail ripped out all of Blech's fatties and let the Sentinel in to draw more cards. Blech shored up with Tel-Jihad Archers and then a Granite Shard to get rid of Gail's annoying Tansfixers.

A Somber Hoverguard showed up for Gail and a Tangle Golem for Blech although neither appeared to have a major effect on the game. Gail was the one who needed to get busy else Blech's Mind's Eye would take control of this game. He summoned a Useful Leonin Shikari and swung with anything in the knowledge he could flip the Mask of Memory to whichever creature got through. Gail had better plans though as a Roar of the Kha disposed of Blech's Joiner and Archers.

Blech, now many creatures down, decided it was the perfect time to play the Pulse of the Tangle that had been waiting in his hand to add a couple of beasts to his team.

Gail's fliers were still proving especially troublesome. Gail tried to increase the damage with Vulshock Gauntlets, but Blech had a Shatter waiting to stop that.

With ten minutes remaining on the clock the other matches were tied at one apiece.

Blech added another beast and then blew up the shard with a Viridian Shaman. Another hit from the fliers dropped Blech to 5 life.

Strangely, Gail discarded a Leonin Battlemage to the Mask. His hand must have been strong. It was. He added two more fliers, a Neurok Prodigy and Emissary of Hope.

The extra fliers were enough as Blech didn't have an answer despite all the extra cards he'd drawn.

With only two minutes left plus time for deck checks the players got on swiftly with the second game. Blech ramped up his mana again with a Joiner and Myr while Gail made the first threat, a Prodigy. A Mask of Memory on the flier gave Gail an early significant advantage.

Dirk Hein won his match to give The Unusual Suspects the lead.

Blach hit back with Tel-Jihad Outrider but the Elf Replica and second Joiner he cast seemed less than impressive, especially as Gail added a Hoverguard to his unblockable airforce.

Now in time-added-on Blech tried to handle the airforce with a surprise Tangle Spider only for it to be sent straight back to his hand with Echoing Truth.

Getting desperate Blech swung with his whole team, straight into an entwined Roar of the Kha 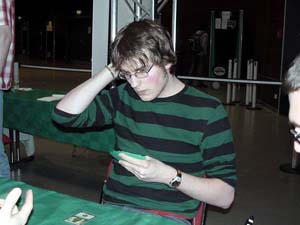 Brucker's match ran out into a 1-1 draw meaning Blech had to win here to take the match for his team.

Gail now knew he only needed to run a delaying action to run out time to level the match. A Solar Tide to wipe out the board as they ran into extra turns was enough to do exactly that.