Round 3: Akihiro Kashima vs. Yuusuke Nakamura 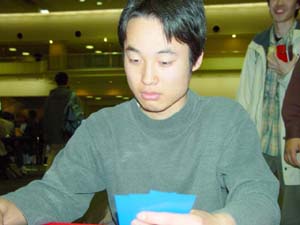 Though not well-known two weeks ago, Akihiro Kashima is enjoying a whirlwind of fame. At Venice he became just the second Japanese player to crack the Top 8 of a Pro Tour, playing a home-brewed green-white-black Vegetation deck. It earned him immediate recognition. He's not as confident about his Limited game, but hopes that success will breed success this weekend. Standing in his way this round is newcomer Yuusuke Nakamura, who came to this event with only one bye. He defeated his second-round opponent handily, and is excited about his chances.

Nakamura kept a forest, Wirewood Elf hand playing first, and watched Kashima mull all the way down to four lands and Searing Flesh. Nakamura's deck was not in a giving mood, though, serving up no land in the first two draws. Kashima meanwhile drew Flamestick Courier and a morph. Before things could get out of hand, Nakamura pulled a swamp, and then a forest. Deathmark Prelate shut down Kashima's offence.

Kashima was drawing more land. He didn't have a second swamp to go with his face-down Skinthinner, though, nor a beast for his Skirk Outrider. Crown of Suspicion took down the Courier, and Nakamura started to go on the offensive with one of his morphs. Kashima took the damage, then drew Words of War. Unfortunately for him he needed more action, and tried to bluff a big creature by sitting on his mana. Nakamura, undaunted, continued to swing. Kashima pulled another land and grimaced.

Nakamura unmorphed his attacker at the end of Kashima's turn: Sootfeather Flock. He untapped and fired through for three more before setting up Needleshot Gourna. Kashima drew Erratic Explosion and aimed it at the flier. He flipped up Shock, and was not in any mood to appreciate the irony. Nakamura afforded him little time to do so. Cruel Revival hit his face-down, returning a previously-discarded Fallen Cleric and leaving Kashima with just Skirk Outrider. Nakamura smashed through. Kashima drew his next card, and scooped. 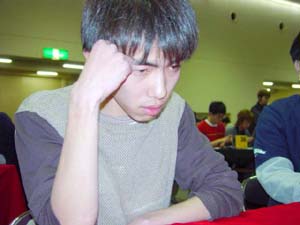 Kashima's draw for Game 2 was a welcome change. While Nakamura laid lands he was getting busy with Sparksmith and Leery Fogbeast. A cycled Solar Blast took down the 'Smith, but that was no worry to Kashima who held no other goblins. He bashed for four and added a morph. Nakamura showed him one of his own, and rather than Shocking it and coming through for six, Nakamura sent his morph in for the trade, and then added Ridgetop Raptor.

Nakamura punished him with Noxious Ghoul. A topdecked Solar Blast got it out of the way for four more damage. Nakamura was ready with a pair of morphs. Kashima had only Goblin Grappler. Still he held back on his Shock, trading his Fogbeast for one of the morphs and taking two more damage. Nakamura played the first really big gun: Rockshard Elemental. Kashima had no rejoinder. Just to make sure, Nakamura followed up with Menacing Ogre, winning the bid. Holding back on that Shock cost Kashima, big time.