Round 3: All Over in the Glint of a Hawk's Eye

"I've alternated between snake eyes and boxcars all tournament," remarked a dapper Rich Hoaen as he rolled his second double one of the event to see who would go first in his match against Ben Stark. The Pro Tour Paris winner sported the ChannelFireball shirt of his team. Hoaen, meanwhile, had a button down shirt and a natty moustache – something of a November special.

Stark was very happy to be on the play. The Floridian pro is currently at 48 points, and good for level 8 simply by showing up to Worlds. Stark is playing Tempered Steel, a deck that is able to go crazy on the early turns given the opportunity.

Stark led with Seachrome Coast into Signal Pest and Memnite. He saw a Llanowar Elves from Hoaen, before playing a pair of copies of Origin Spellbomb. Hoaen, unperturbed, struck back with an Arc Trail to clear a path for his elves to attack. He had another Arc Trail the following turn to kill off a Myr token before he played a Green Sun's Zenith to fetch out a Birds of Paradise. His Red-Green Wolf Run deck was already well ahead on mana against Stark, but more importantly, he had more cards. 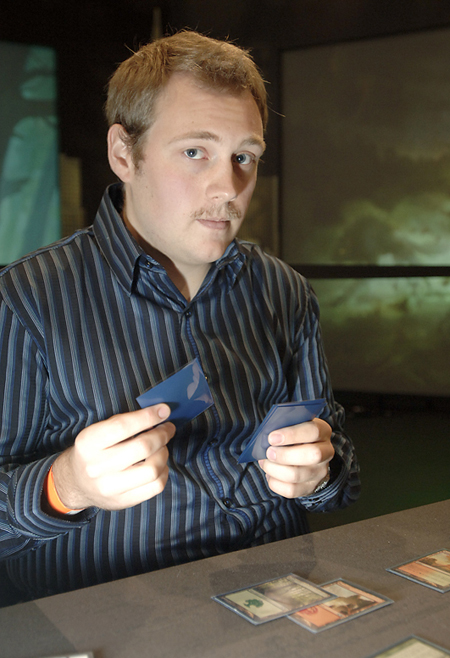 Stark played out just about his whole hand, casting a Glint Hawk Idol, Vault Skirge and a Dispatch on Birds of Paradise. An Acidic Slime dealt with the Idol, and later Garruk Relentless killed off an actual Glint Hawk. Stark was having a lot of trouble keeping threats on the board in any way shape or form. While he was able to attack Garruk, he scooped up his team to an Inferno Titan, and was soon scooping up the rest of his cards too.

"I think your plan is all in the main," joked Stark as he looked at his sideboard for second game.

"I knew that when I saw Green Sun's Zenith for one that I must be in trouble." 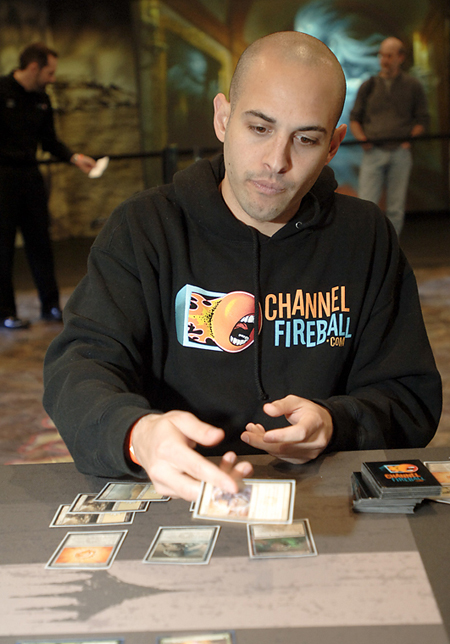 Stark led with a Mox Opal to allow a turn-one Glint Hawk. He had another for the second turn, while Hoaen was deploying a Birds of Paradise and a Rampant Growth in order to get ahead on mana. He had a turn-three Tree of Redemption, which gave Stark pause. The tree would afford the Canadian a huge bank of extra life to work with, which could prove crucial for the matchup. That Tree of Redemption as a creature that can block was not particularly relevant. A pair of copies of Glint Hawk, Vault Skirge and Inkmoth Nexus were quite the air force for Stark. Wary of all that life gain, he used a Despatch to off the tree, but slumped a little in his chair as an Inferno Titan came to replace it. He lost a Glint Hawk and a Vault Skirge to the red monster, and the following turn he lost his remaining creature to the Titan as it attacked in.

Acidic Slime took out Inkmoth Nexus, and that was the ballgame. Hoaen took it all down in record time.

"I brought in a couple of copies of Ancient Grudge, just in case," remarked Hoaen with a smile. It was never going to be close.