Round 3: Andrea Dato vs. Alex Shvartsman 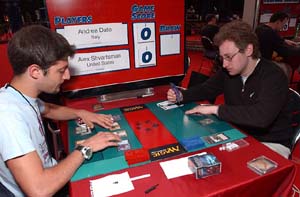 This Feature Match is the result of Mark Rosewater screwing up. He mistook Andrea Dato for his brother Federico, who made Top 4 at Pro Tour Rome, and was one of the main creators of the old High Tide deck. Shvartsman was not very happy with his deck, and mentioned how awful it was many times during shuffling.

The first creature of the game was Dato's Pilgrim of Virtue, while Shvartsman's Longhorn Firebeast went to the graveyard as Dato took five points of damage. Dato built up the air with Aven Cloudchaser, and Shvartsman summoned an Ichorid, which attacked for three points of damage. Dato missed his fifth land drop, but continued to build up his forces with Cephalid Sage. Meanwhile, Shvartsman played mediocre creature #3 in Otarian Juggernaut. The Sage and Cloudchaser attacked, and the Juggernaut blocked the Sage. Psionic Gift then enchanted the Pilgrim, which dealt the final point of damage to kill the artifact creature. Dato improved his defenses even further with Angelic Wall. Shvartsman played a second Longhorn Firebeast, but this one got to stick around. 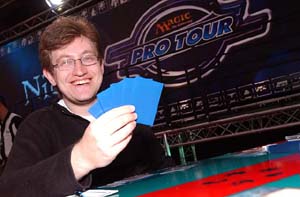 Dato was now content to hold down the ground, and fly over with the Cloudchaser while shooting away with the Pilgrim. Shvartsman summoned Barbarian Lunatic, which took out the Cloudchaser. Floating Shield gave the Sage protection from red, letting it sneak by the Firebeast for two points of damage. The Firebeast swung back, and Shvartsman used Rites of Initiation for one discarding a swamp, but Dato pointed out the discard effect was random. Shvartsman, obviously not a fan of the card, commented, "I'm not used to using cards of this 'quality'. And I used that term loosely." He received a warning from the judge for misrepresentation and joked "What can I say, I'm a savage cheater." A few turns later, the Sage came through for the victory, assisted by the pro-black pinger. 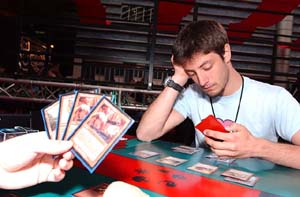 Shvartsman started off with a second turn Filthy Cur, and enchanted it up with Crackling Club, joking "Have you ever seen a better draw? Smash! I'll forget to play a land too!" Shvartsman did find a third land on the following turn. Dato summoned Pilgrim of Virtue to stop the beats, but Shvartsman used Sonic Seizure to take it out of the way, randomly discarding Skeletal Scrying. Aven Cloudchaser came into play and destroyed the Club, and Shvartsman brought out Longhorn Firebeast, which hit the graveyard as Dato took five points of damage. The Cloudchaser attacked for two, and Dato fortified the ground with a Beloved Chaplain, and enchanted it with Strength of Isolation. Shvartsman summoned another Firebeast, which hit play. Organ Grinder would have given Shvartsman a way to win around the Chaplain, but Dato was waiting with Syncopate. Cephalid Scout followed up, and was joined by Amugaba. Shvartsman simply responded with "Death is coming." Indeed, that was quite accurate.