Round 3: Andrew Corney vs. Andrew Varga

Earlier in the day these two players had joked that if they played each other they would have to be featured, especially after the epic battle they fought in a feature match in GP Sydney late last year. The name Andrew Corney should ring a bell to most readers as his deck, "Sir Shandlar Visits His Friends For Tea" was played by Chris Pikula during the invitational auction format. Varga won the dice roll and elected to play. 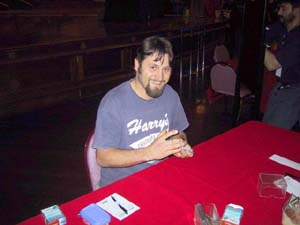 Despite choosing to draw first it was Varga who played the first spell, an Angelic Wall, which was a perfect solution to Corney's turn 3 Patchwork Gnomes. Varga kept playing great spells with a turn 3 Hallowed Healer backed up by a turn 4 Dusk Imp and turn 5 Blessed Orator. Corney could do nothing but lay lands and it wasn't till turn 6 that he was able to cast Liquid Fire for 4 points of damage on the Healer and 1 point of damage to Varga, which was prevented as the Healer left play. To keep the momentum going Varga played a Zombie Assassin and a perfectly timed Cloudchaser Eagle which removed the Kirtar's Desire from the Dusk Imp which had been pecking away at Corney's life. With a land to spell count of 12/6 Corney could do little to stop the aerial assault that killed him 2 turns later.

After a fast game one that only lasted 10 turns Corney chose to play first and began game two the same way he began game 1 with a third turn Patchwork Gnomes. Varga had the perfect answer when he played Afflict on the Gnomes and again had the answer to Corney's turn 4 Halberder when he Firebolted it and cast a Hallowed Healer. Refusing to lay down to the savage removal, Corney summoned a Mystic Zealot and a Beloved Chaplain and began to send the Zealot in to the red zone. Rather than prevent the damage and leave his Healer vulnerable to burn spells, Varga decided to simply take the damage for a few turns, while he slowly amassed an army that would take control of the board. He played out a Dusk Imp and a Famished Ghoul but once again Corney had drawn his Liquid Fire, removing it from play before Varga had a chance to get threshold effects. Slowly the imp began to peck away at Corney's life, and when it fell under the influence of Kirtar's Desire a Cloudchaser Eagle brought it back into the game. Corney then drew into his Wayward Angel and stopped the airforce of Varga dead in its tracks, which allowed him to start applying pressure with his Beloved Chaplain and Mystic Zealot. When Corney tapped out to cast a Crashing Centaur Varga seized his chance and cast a Firebolt and then flashed it back from his graveyard to do the final 2 points of damage. 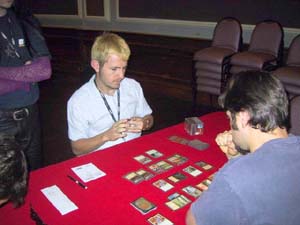 After the game Corney explained that he had no way to protect the angel and there was no reason for Varga not to try and kill it because if it remained in play it would win Corney the game. Even with the Angel gone Corney continued to seize control of the game, casting a Rabid Elephant and using the Centaurs ability to create threshold for his cards. Varga then used his Famished Ghoul to negate the threshold obtained by Corney after damage was on the stack having triple blocked an attacking Centaur with his Cloudchaser Eagle, Blessed Orator and Famished Ghoul. After assigning 5 damage to the Eagle, Corney sacrificed his Timberland Ruins to regain threshold and cast a Krosan Beast. Varga then dumped his hand casting a Painbringer and a Chainflinger, which was forced to chump block the Beast. Varga dropped a cabal pit and used it to remove the Beloved Chaplain but then made a small mistake removing only 7 cards from the game to kill the Beast forgetting that it was an 8/8 and had to Firebolt to finish the job. Although this had no bearing on the match he was annoyed with himself for making such a silly error, and the Firebolt obviously could have been used later in the game to remove another creature. The two then passed the turn back and forth, reestablishing the board with creature after creature, however Varga had dropped to 2 life after the Krosan Beast attack. It was only a matter of time before Corney drew into some direct damage that could finish Varga off and with 2 minutes to go in the round that's exactly what he did. After shuffling the two realized that there would not be enough time for game 3 and decided to settle on a draw.