Round 3: Antoine Ruel vs. Gary Wise 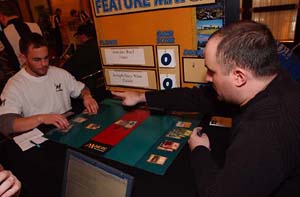 This matchup is between two innovative and colorful decks. Antoine is playing a black/white Cleric deck that splashes blue for Read the Runes and features such nuttiness as Celestial Gatekeeper. Gary is playing a green-red-white fatty-filled Biorhythm concoction with an Island in the sideboard to support three Chromeshell Crabs.

Gary impressed me right off the bat by placing his Forgotten Cave in the graveyard when he cycled it, instead of in the center of the table "on the stack." The card goes to the graveyard as part of the cost to cycle it, not upon resolution of the draw effect, and putting it in the center of the table is, in a way, misrepresentation. Of course, when he cycled a Krosan Tusker two turns later, he put it in the center of the table. Ah well. For the length of the match, Ruel also placed his cycling cards on the table instead of in the graveyard. Maybe the judges told players to do it that way to show what's going on, but I've heard whispers of players' cycling lands mysteriously ending up in play when the stack resolves. It's messy all over the tournament. I guess it's a personal problem I have, but I'm such a fan of technical play that little things like that bug me. Enough. There's a match to be played.

Antoine put out a turn-3 Rotlung Reaninator and a turn-4 Graveborn Muse, giving himself some extra drawing power. But those paled before Gary's turn-5 Explosive-Vegetation-powered Silvos, Rogue Elemental. Antoine took one hit from the monster and was dismayed when Gary added another six-mana green Legend—Kamahl, Fist of Krosa—to the table.

Antoine had to play Akroma's Vengeance on his next turn, even though Wise had a Grand Coliseum untapped and could regenerate Silvos. Wise made the error of saying "Ok" and picking up his creatures before remembering to regenerate the Legend, however, and the judge ruled that it was too late. Antoine was back in the game.

Antoine played a Celestial Gatekeeper with a Starlit Sanctum untapped. If the Bird died, he could get back his Rotlung and a Withered Wretch he discarded to an earlier Read the Runes.

Wise played out a Ravenous Baloth and a Wall of Mulch and decided to bide his time. He had the Biorhythm in hand and plenty of creature removal, and just needed to get Antoine to tap both of his Sanctums somehow.

Antoine played a morph which Gary hoped was an Exalted Angel, as Antoine had just four mana untapped. Gary Shocked the morph, hoping to get Antoine to tap out, but it was just a Daru Sanctifier. Gary was still in good shape, and cycled a pair of Slice and Dices to knock out the Gatekeeper and the Sanctifier, untapped and cast Biorhythm, dropping himself to 1 and Ruel to 2, and a Shock did the rest. 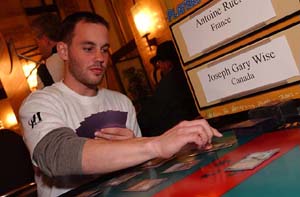 Antoine got the jump in game 2 with a turn-3 Rotlung Reanimator. Wise cycled a Tusker and dropped a turn-4 Baloth, which was felled by a Death Pulse. Wise continued to develop his mana with Explosive Vegetaion, and then dropped Kamahl. He used the Legend's power immediately, turning Ruel's Grand Coliseum into a 1/1 and then Shocking it. If Wise was holding a Slice and Dice or a Starstorm, all of Ruel's lands would be going away soon.

Ruel had put out an Exalted Angel, and had a Pacifism for the green Legend. He would win the damage race, but was still at the mercy of any of Gary's mass removal.

Wise made his second big error of the match, playing out a second Kamahl when one was already in play. With no removal in hand, the game was already bordering on the unwinnable for Wise, but the error was certainly demoralizing and got a rise out of the crowd. Wise shook his head. "That's from not knowing the cards very well." With no answers to the Angel forthcoming, Wise scooped. Kids at home: make sure you understand rule 420.5e.

Ruel started Game 3 under a Root Maze, playing three Grand Coliseums and a Barren Moor. Wise, on the other hand, had no such problems, using a fetchland, a Tusker, and an Explosive Vegetation to build the perfect mana. Antoine had answers for Gary's monsters, though: Kamahl was hit with Cruel Revival, and Silvos was Pacified. Antoine goaded Gary to play a second one. "I promise I won't do that," said the Canadian. Ravenous Baloth was also hit with a Pacifism, and Wise was looking a little frustrated. 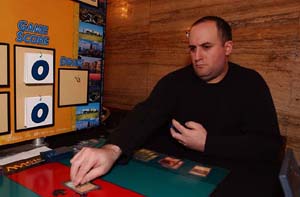 Ruel put out some offense in the form of two Rotlung Reanimators, which made Gary's mass removal all but worthless. Exalted Angel and Celestial Gatekeeper complicated things even more for Wise. Gary made what looked to be a desperation "Fog" play with a Starstorm for two, which basically turned Antoine's Gatekeeper and two Reanimators into six tokens and... two Reanimators. But he was still alive. Ruel simply shrugged an played a face-down creature.

Wise had exactly what he needed, however—two more mass-removal spells. He played Slice and Dice. Ruel flipped up his Daru Sanctifier to give himself another Cleric, and winced when he realized that by doing so, he was forced to destroy the Pacifism on Silvos (the Pacified Baloth had long-ago been sacrificed for life). The Slice killed the Reanimators and gave Antoine a fresh batch of tokens. Starstorm for two took care of the tokens, and the Exalted Angel, leaving Silvos as the last man standing. Somehow Gary worked his way out of what looked like a hopeless situation.

Ruel, saddened, played another Gatekeeper and passed the turn. Biorhythm and the trampling Elemental ended the match in Wise's favor.

Wise was happy with the win, but disheartened with his shoddy play. "I play Online too much," he said, "Too much lazy mouse-clicking Magic. My board vision is terrible. I need to play more in real life." I guess there can be too much of a good thing.