Round 3: Antoine Ruel vs. Olivier Ruel 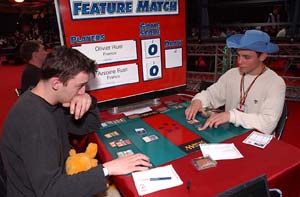 Having not met for a year in tournament play these two brothers played yesterday in the first round of the masters and were now meeting a second day in a row. In addition to this Olivier had been feeding Antoine during the draft.

Olivier elected to play first and mulliganed down to no cards. Antoine did too. Obviously agreeing to play off the top of their decks for fun, Olivier managed an unbelievable opener as he laid Mountain, Island, Plains in his first three turns off the top of his deck, followed by a Cephalid Looter and a Teroh's Faithful. Antoine managed to get back in the game with Gloomdrifter and a Dirty Wererat, but the Looter just kept looking through the deck for better and better cards – Violent Eruption, Flame Burst, Teroh, Shelter, Hallowed Healer.

The Healer managed to single handedly hold off two Dirty Wererats as a Balshan Griffin and a flying Mystic Visionary swooped over the top as Olivier had easily reached threshold thanks to his Looter. A Moments Peace had little effect from the elder brother as it only held off the inevitable. 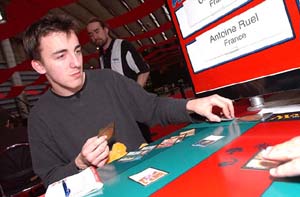 All the way through this match the brothers bantered in French jokingly – both not really minding who won.

This time the two brothers decided to stick with 7 card hands, and Olivier got off to a good start again – this time with a Chainflinger, Fiery Temper and Ambassador Laquatus. The Temper dealt with a Krosan Avenger with a Strength of Lunacy on it, then a Flame Burst destroyed a Nantuko disciple. As if this was not enough Olivier then played his Cephalid Looter and things looked pretty bad for Antoine who only managed to summon a Rotting Giant, then Waste Away the Laquatus.

So after some very quick play from both sides the board looked as follows: 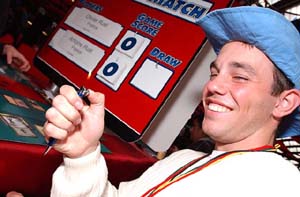 Wham! Gloomdrifter came into play from Antoine's side destroying all but his opponents Dreamwinder and suddenly Olivier was in a dire position. Two turns later the fliers managed to swing over to bring the match level.

The apparent lack of competitiveness explained itself in game 3 as the two brothers revealed to the crowd that they were going to draw this round – the threshold on reaching day 2 being 13 points (4 wins and a draw).

Nevertheless they played a third game for a laugh in which Olivier mulliganed down to 6, kept a one land hand, missed a land drop on turn two and got his smashed.