Round 3: Ben Rubin vs. William Jensen 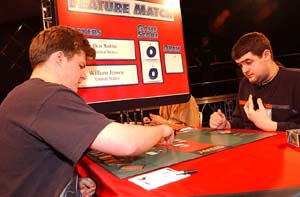 Ben Rubin and Billy Jensen have been friends for years. They even won a team Grand Prix together. In round 3, though, they faced off as opponents to see who would be the last undefeated player at their table. Rubin commented when he sat down in the feature match area that he needed to get a little lucky. That's because Huey has two copies of Shadowmage Infiltrator in his deck and Rubin is playing blue-white. Rubin does have three Aether Bursts so his game plan is to "be the beatdown" and use those Bursts to gain tempo.

Rubin came out fast in Game 1 with Patrol Hound, Mystic Visionary, and Puppeteer before Huey played his first spell - Childhood Horror. Rubin's Shelter meant his Visionary survived combat with the Horror and Huey was even further behind. Rubin promptly added Dreamwinder to his army, used Repel to further decimate Huey's defenses, and the game was never really close.

Game 2 was one of the best games of Magic I've seen in a long time. 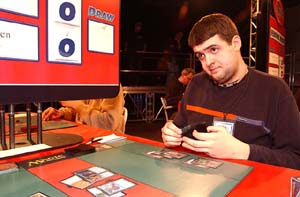 Each player Peeked at the other guy's hand on the first turn of game 2 and then they flew through the next several turns. Rubin had two bounce spells (one Repel and one Aether Burst) but his only creature was a Patrol Hound so he was only able to convert that tempo into six points of damage. Then Huey had an Infiltrator heading at him. Rubin top-decked a Soulcatcher and then a second Burst, which left Huey with no creatures left in play, but Huey responded with a Burst of his own that unsummoned Rubin's whole team (also sending Psionic Gift to the graveyard). To add insult to injury, Huey replayed his Finkel and followed up with Standstill! Rubin was stuck between the proverbial rock and hard place. Do nothing and Huey gets to draw extra cards. Do something and Huey gets to draw extra cards.

Rubin came up with a really good plan - he did nothing, allowing Huey to draw cards from Finkel. Huey couldn't use any of those extra cards without giving Rubin the three from Standstill so Huey was soon forced to start discarding. In addition, since Rubin was only taking one point of damage per turn, Huey was actually obligated to play an additional damage source or else Rubin could just deck him. After 9 attacks with Finkel, Huey gave in and dropped a pair of fliers, giving Rubin the cards from Standstill. Rubin promptly played the fourth Aether Burst of the game during Huey's end step and Huey was forced to discard three spells.

So basically, Rubin watched his entire team get unsummoned, then his opponent played a Finkel and a Standstill, and Rubin someone figured out to say to himself "Cool - I'm winning!" He rightly guessed that Huey would draw too many cards from Finkel before figuring out what was up. 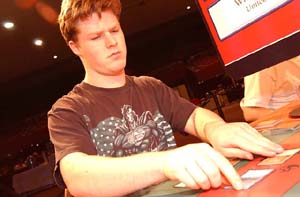 Rubin then untapped and played four guys plus a Standstill of his own! Huey had to give Rubin three more cards, but he made up for that because the spell he played (Infected Vermin) killed three of Rubin's creatures. After that both players dumped their hands of creatures into play and the board wound up fairly stalemated. Having drawn six from those two Standstills it was now Rubin who was obligated to try to kill his opponent or get decked. He fought valiantly, but a timely Aura Graft from Jensen (moving Kirtar's Desire from his own Aven Windreader to Rubin's Soulcatcher in the middle of combat, allowing the Windreader to block and kill a creature) kept him alive. Rubin made one last valiant charge and did manage to get Huey down to one, but Rubin's second Puppeteer was the very bottom card in his library so he was unable to poke through for the final point of damage before he got decked.

There were only two minutes left in the round when game 2 finally ended so the two friends walked away with a draw. Depending on your point of view their draw was either anticlimactic or fitting.