Round 3: Ben Stark vs. Matt Noble 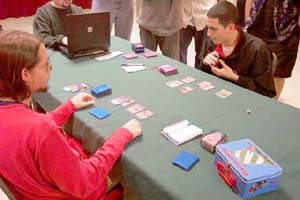 The eternal question: Oath versus.....Ghoul Burst? It's the battle of the deck that won PT Houston versus the deck that had an awful showing at PT Houston. Ben Stark himself piloted the Academy Rector based deck to a 33rd place finish at that tournament, and he swears that the deck performs better than its history would suggest. Matt won the die roll and chose to play first.

Ben made the first play of the game, a turn one Birds of Paradise. Matt answered with Oath of Druids. Stark cast a second turn Cabal Therapy, naming Counterspell. This nailed one copy of the signature blue card, while revealing a hand of Krosan Reclamation, Oath of Druids, Fact or Fiction and Brainstorm. He then summoned Llanowar Elves, played Windswept Heath, and passed the turn.

Matt took this opportunity to activate the namesake enchantment of his deck, milling into a 6/6 Cognivore. Ben returned fire by enchanting his flyer with Pattern of Rebirth, allowing Noble to bring out another Cognivore. This pumped the first flyer to 15/15—and people used to think Morphling was huge!

Ben pondered his board position. He laid down a swamp, giving him the Patterned Bird, a Llanowar Elf, a Swamp, a Forest and a Plains. His first play: hard-casting a second Cabal Therapy. As it successfully resolved, he picked up his opponent's graveyard, and counted each copy of the cards. Finally, he named Mana Leak—revealing a hand of Krosan Reclamation, Fact or Fiction, and two other inconsequential cards. When Ben attempted to flash back his Cabal Therapy to kill his Rector, Matt responded with Krosan Reclamation to shuffle both the second Therapy and the Rector into the library. With no recourse left in the game, Ben scooped. 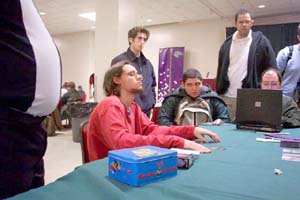 Both players kept, and Ben came out swinging with a first turn Cabal Therapy, naming Oath of Druids. It was a swing and a miss, as Matt's hand contained Foil, Moment's Peace, Polluted Delta, Accumulated Knowledge, Yavimaya Coast, Fact or Fiction, and Forest. On the very next turn, with the board clear of non-land permanents, Matt ripped Oath off the top of the deck. Ben slumped back into his chair slightly demoralized. He untapped, cast Brainstorm, and found the Ray of Revelation he needed to get rid of the enemy enchantment.

Ben came out full throttle next turn, summoning Nantuko Husk and Llanowar Elves with the game-winning Academy Rector in hand. He flashed back his Therapy, sacrificing his Elves after tapping them for a mana. In response, Noble cast one of his two Accumulated Knowledges, and lost the second one to the discard spell. Stark attempted to cast Academy Rector with a green floating, hoping to draw his opponent in an ill-advised Force Spike—but Matt caught this quickly. He instead responded with Brainstorm, which netted him the Island he needed to Foil the white creature.

Matt: "So you've got a green floating, right?"
Ben: (Smiling) "I was hoping to be the Trickster Mage. I hope that one point of mana burn doesn't come back to bite me." 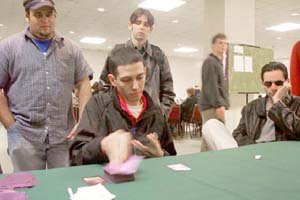 Stark kept on drawing lands, emptying his hand to play both Phyrexian Ghoul and Nantuko Husk, against a full grip including Moment's Peace and several card drawers. Ben's second Brainstorm of the game revealed the choices of Cabal Therapy, Birds of Paradise and flotsam, none of which would help him over the next few turns.

Pernicious Deed wiped the board clear of zombies, and then the control player cast Intuition to nab a Counterspell. Ben used Windswept Heath to get rid of the his upcoming useless cards, and promptly drew two straight lands. He attempted to cast his Therapy, but it was countered—as Ben extended his hand to concede, Matt flashed me a hand of double Forbid and Mana Leak.