Round 3: Better Lucky than Good

Ten minutes into the round, the seat opposite Olivier Ruel, at 0-2 and in danger of being eliminated from the competition, remained empty. Judges had been dispatched to the player tables and his opponent's name had been called on the loudspeakers, but all efforts to locate Edwin Edward drew a blank.

Olivier was positively jubilant. With a broad smile plastered across his face, he light-heatedly lamented his performance thus far and mused on his sudden stoke of fortune.

In stark contrast was the adjacent table, where Stuart Wright was locked in solemn battle with Andre Coimbra. Both players were similarly at 0-2, and a loss here for either player would mean the end of this Pro Tour journey. 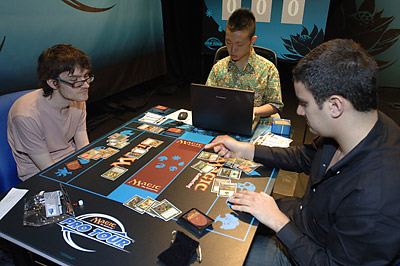 Stuart Wright and Andre Coimbra, at 0-2, are fighting to stay in the tournament.At the end of their fifth turns, both players remained at an impasse, with Andre controlling a pure Forest mana base, Cream of the Crop, and a reinforced 3/3 Gilt-Leaf Seer, while Stuart had a rainbow of Island, Swamp, and Mountain, in addition to his Ingot Chewer. Andre's attempt to break the stalemate with consecutive Nath's Elites was unsuccessful, as the first was Consumed by a Bonfire, and the second was answered by Mournwhelk, which also emptied Andre's hand.

Nonetheless, Andre's card quality remained decent, with Cream of the Crop feeding him the best cards in his deck. He promptly recovered with Primal Command, which brought him to 25 life against Stuart's 20, and gave him Wolf-Skull Shaman.

The respite didn't last long, however, as Stuart shifted the focus of his assault to the board position. Hearthcage Giant invoked a sigh of "that's big" from Andre, who slumped back in his seat. The miserable defense of Wolf-Skull Shaman and Elvish Warrior Andre mustered on his turn was swept aside. Stuart's Sower of Temptation seduced Andre's Nath's Elite, and Stuart was able to swing in with everything to take Game 1.

The mood remained sombre as the players boarded and shuffled up for their next game. Andre chose to draw, which would cost him, as Stuart drew the quick half of his deck.

Opening with a creature on each of his first three turns, Stuart quickly put the pressure on Andre to stabilize. Andre's Wolf-Skull Shaman and Elvish Warrior might have been sufficient, had it not been for Stuart's fourth turn Sower of Temptation, which stole the Shaman.

On the back foot, Andre was forced to churn out a stream of chump blockers, whilst Stuart's fliers continued to pick away at his life total.

All seemed to be lost for Andre when Stuart increased his lead with an end-of-turn Violent Pall. Yet hope blossomed once more when, at 4 life, Andre drew into Cloudthresher, which could have cleared the board of Stuart's flyers and shifted the advantage to Andre's court.

Stuart allowed the Elemental to come into play, but responded to the trigger effect with Release the Ants. He downplayed the odds of winning the clash, pointing to Andre's Cream of the Crop, but went on to reveal Hearthcage Giant! Release the Ants dealt 1 damage to Andre, then returned to Stuart's hand to deal the final point.