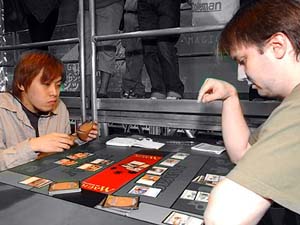 Arita were off to slow starts. One had been pretty rough on the Class of Nagoya through the first two rounds of the tournament. Of the seven players from the Top 8 of that event here in London, only one of them was not facing virtual elimination in the final round of the first draft pod.

"Everyone from the Top 8 from Nagoya is 0-2," sighed a disappointed Anton Jonsson. Players need to have at least a 4-2 record on Day One in order to advance to the second day of battle. If you are wondering how one of the 0-2 players was not facing elimination this round, it is because Pro Tour Nagoya winner Shu Komuro was the beneficiary of a bye. He was parked along the rail to watch the face-off between Jonsson, his opponent from the Finals in Nagoya, and Columbus Top 8 competitor Ryuchi Arita.

Ryuichi struggled with his mana throughout this game while Anton mounted an army of fragile creatures from Soratami Cloudskater to an unflipped Hired Muscle. A second-turn Genju of the Spires needed a third land to be useful and he tried to staunch the bleeding with Psychic Spear.

The Spear hit Thief of Hope but also revealed Oboro Envoy, which hit play a turn later. A third land let Arita get in for six with the Genju and Anton played out his hand with Ghost-Lit Warder and Deathmask Nezumi. 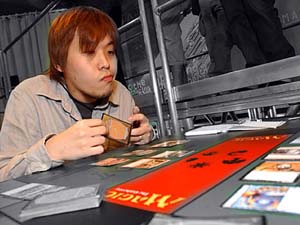 Arita not only needed more land, he needed the right land; a second Swamp to be precise. He was holding Hideous Laughter from his opening draw and it promised to wipe out all of Anton's squad except the Envoy.

The Ghost-Lid Warder was only complicating things for Arita - even if he drew his Swamp he would not have any wiggle room to get around the counter-dude. He sent his Genju into the waiting arms of the Warder without playing the fourth land he had just drawn - a Mountain. Anton looked puzzled as his mana-screwed opponent sent his Mountain to its apparent death. He finally traded. Ryuchi recast the Genju with the land he had been holding. Anton began to restock his hand with the Cloudskater.

Anton kept sending in the team and Arita's rat jumped in the way, buying one more turn for a Swamp to be on top of his library to fire off his Hideous Laughter. When it was another Mountain, he sighed and they went on to Game 2.

This game saw both players mount armies of mediocre men over the first few turns of the game. Anton's Oboro Envoy was game's only legitimate A-list creature. Arita sent his men aggressively into his opponent's board. Anton's Mistblade stepped out in front of a Blademane but what Anton thought was an Emberfist Zubera was actually a disguised Okiba-Gang Shinobi.

Both players had a couple of quiet turns. Arita replayed his Emberfist after deploying another Blademane Baku. Anton dropped a Callous Deceiver leaving only one mana open - he could not activate his Envoy.

Both players had four creatures and Arita sent in the full squad. Anton scratched his head, moved around his pieces and tried to find the shape of his blocks. "I'll let you know when I am done."

If he didn't block everyone he was going to die to Devouring Rage, but he could not know that for sure. Finally he decided to let a Shinka Gatekeeper on through and it turned out to be fatal with an additional nine-point surge from the Rage. Anton explained that he was more concerned about what would have happened if he had blocked than if he did not. "There are so many other cards that I have to worry about there if I block everyone."

Arita fanned through his cards and it looked like he was going to have to ship back his hand but the last two cards were a Swamp and a Mountain, so he kept it. He ended up stuck on those two for several turns. His Akki Underling threatened in two turns as he grew his hand from five up to the full seven - he was not holding anything back, he was just still stuck for lands.

Anton's Callous Deceiver kept the Underling at bay until Arita got it full strength. Though once that happened, Anton foiled his hard work with Mystic Restraints. Anton was not doing much of anything either and passed the turn to a frustrated Arita, who pounded on the table when he missed another land drop. 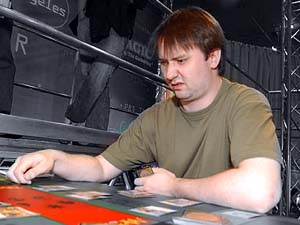 Was victory in the cards for Anton?

Blademane Baku was countered by Anton's Hisoka's Defiance. The next one was not. Deathmask Nezumi came down for Anton.

"Finally," cheered a sympathetic Jonsson as Arita found his elusive third land. Arita had Glitterfang and sent in his Blademane to trade with a Teardrop Kami. Anton tapped the Emberfist before it went away and came over for three on his turn. He grew his team with Hired Muscle

The players traded creatures of little consequence. Arita was concerned with the Hired Muscle and pounded on his deck. Arita was rewarded with a fifth land to power out Skullmane Baku. He had Glitterfang and Wicked Akuba waiting to take down the Muscle if he got another turn.

Anton put Phantom Wings on Hired Muscle and sent it and a Callous Deceiver into battle. Arita double-blocked the Deceiver and killed it. Kiku's Shadow took out the threat from of the Skullmane.

Arita attacked with Shinen and Glitterfang to force through Okiba-Gang. Anton restocked with Ninja of the Deep Hours and was able to turn on Scarmaker when he recast Callous Deceiver. Okiba-Gang got only a Swamp next turn. Wicked Akuba joined the team but Anton was content to fly in for four with Scarmaker. He added Thief of Hope and that was enough for Arita, who conceded defeat and would not be advancing to Day Two.

Anton needed to win out in order to make Day Two. "We both had mediocre decks but my Callous Deceivers were actually good for once against his 2/1 creatures."