Round 3: Black Ops vs. Metagames 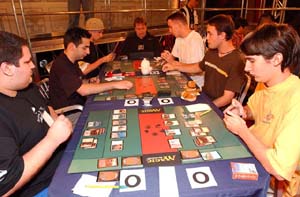 Round three saw the battle for French supremacy take place in the feature match area. Black Ops won the French national team championship a couple years ago and rode the resulting high rating into the very first Masters series event. The rest, as they say, is history. They upset Antarctica to win that event, won Grand Prix Cannes, and the Ruel brothers have become fixtures of the Pro Tour. Antoine Ruel finished third at Worlds last month and will be attending the Magic Invitational next month. Olivier Ruel has also put up some impressive results. Florent Jeudon doesn't have impressive individual finishes, but he has been with the Ruels since the beginning and no one will be surprised if Black Ops is still playing on Sunday.

Of course, the Ruels aren't the only good magic players from France. Raphael Levy has a pair of Top 8's, a Grand Prix win, and a Worlds third place finish of his own. He's teamed up with Franck Canu, who has quietly established himself on the gravy train, and Wilfred Ranque as team Metagames.

Both teams cruised through their first two rounds with quite interesting decks. Each team has a blue-white-red "wedge deck" sitting in seat A and neither team has a true red-black deck at all. Both have black-blue instead. Black Ops put their blue-black deck in seat C where it should, in theory, be able to feast on green decks thanks to its Shoreline Raiders and Vodalian Zombie. Canu did indeed run a green deck against Olivier Ruel an Ruel seemed in control the whole time despite being severely pinched for land. Three land was all he needed for Shoreline Raider. The tide turned, however, when Canu played Darigaaz. Vodalian Zombie doesn't fly, so Olivier had no answer for the big dragon. Soon, Metagames was up a game.

Perhaps the most interesting fact about Black Ops deck constructed is that all three of their decks had blue. In addition to a blue-white deck and a blue-black deck, they also threw Ceta Sanctuary into their multi-color green.

Ranque drew three mountains in his first game against Jeudon and that prevented him from using his Armored Guardian effectively since he only had two plains and one mountain. Jeudon managed to get Ranque to block a kicked Benalish Lancer with the Guardian and then Jilt finished the Guardian off. Ranque then ripped Lightning Angel off the top, which had to make him feel a lot better about having mountains in play, but Jeudon had two Faerie Squadrons, a Samite Archer, and a Silver Drake so it wasn't devastating. Jeudon added Degavolver (with just the red kicker, but that was good enough) to his swarm and when the dust cleared, Jeudon had evened the score on behalf of Black Ops.

Radiant Kavu alone seemed good enough for Canu against Olivier's blue-black deck, but Canu added insult to injury by playing Pygmy Kavu and then picking it up again with Horned Kavu. Olivier drew the mountain he needed to play Crosis's Charm targeting the amazing Radiant Kavu. However, Canu had Fleetfoot Panther ready to save it. One hasted up Serpentine later, Olivier was I chump block mode and the first match was up on the board in favor of Metagames.

Raphael Levy seemed a bit surprised that Antoine Ruel was willing to race with him in game 2. Levy was clearly winning the damage race. However, with the life score sitting at 7 to 5, Ruel revealed the method behind his madness: Overgrown Estate. Levy was sent reeling, rocking back in his chair as he realized he was in big trouble now. Antoine was already up a game and now he had an extra 21 life to work with in game 2. Levy was suddenly forced to worry about defense and then Antoine played a Pincer Spider that shut his offense down. However, Levy didn't surrender. He attacked calmly and deliberately and eventually traded creatures until none were left on Ruel's side. The extra cards he drew from a Phyrexian Gargantuan really helped. Ruel did draw Reckless Assault, a potentially devastating card in conjunction with Overgrown Estate. However, Levy had a big creature advantage by this point and it was too late to abuse that combo. Instead, the match was even at 1.

Ranque had Jeudon on the ropes early thanks to a Slingshot Goblin and a Benalish Trapper in their game 2. Thing got ugly, though, when Raka Sanctuary came down. Soon Jeudon had no creatures and Ranque was evening their match at 1. Ranque's red splash looked great again in game 3 as Goblin Legionnaire and Slingshot Goblin came out to play. A Quicksilver Dagger gave Ranque all the extra cards he needed to win the game and the match for team Metagames. Levy and Antoine Ruel didn't bother to play their third game because they only had 5 minutes left.

Black Ops may still be more famous, but for now the French bragging rights belong to Levy and his boys.