Round 3: Bob Maher vs. Pierre Malherbaud 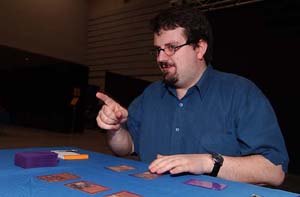 Pro Tour Champion and Player of the Year Bob Maher's had plenty of success in his career, and he shows no sign of stopping. In his way is Pierre "Caribou" Malherbaud, one of France's best. Malherbaud bested William Jensen in the first round, who was playing Tinker just like Maher. He's confident in his Sligh deck.

A mulligan for Malherbaud, and they were off. Maher started with island and Key. Malherbaud showed mountain and Lackey. Maher betrayed none of the weakness in his hand, playing Monolith and a second Key. Malherbaud summoned the pain, Lackeying out a Piledriver, then playing Jackal Pup and Seal of Fire. Maher needed something, and fast. He had Upheaval in hand, but decided to wait another turn and eat the six damage. He dropped a Dynamo and passed it back.

Malherbaud gave him a golf clap for his accomplishment. With a million mana on board, Maher was able to ride Masticore to victory. 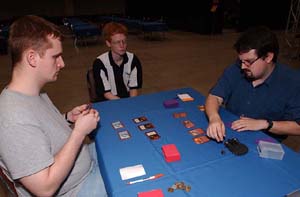 "You're much better than Jensen, he never drew that one." – Pierre Malherbaud

Malherbaud mulliganed a sketchy one-lander into a much better one-lander. Maher also mulliganed. Malherbaud again opened with Lackey, but Maher had the Seal of Removal to slow it down. Malherbaud replayed it, showing he hadn't draw a second land.

Maher exploded. He dropped City of Traitors, then Grim Monolith, then Tinker for Dynamo, and finally Masticore. Malherbaud still didn't have a second land. He nodded sagely.

"Much better than Jensen." – Pierre Malherbaud

The farce was mercifully short-lived.