Round 3: Bob Maher vs. Ryan Fuller 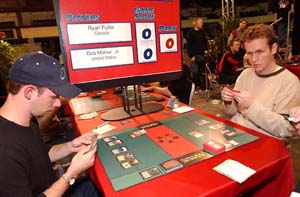 Both players sat down at the table with impressive resumes. As the 10th and 11th all time money leaders, these 2 have over $150,000 in winnings combined between the two. Fuller drafted a G/U deck with a Thermal Blast and a Shelter. Maher drafted a W/U deck with several high quality rares and solid creatures.

Bob Maher won the roll and chose to play first. He mulliganed and played an island. Bob proceeded to miss 2 land drops before finally drawing a plains and a patrol hound. On Fuller's fourth turn he played a Springing Tiger. Maher had the answer for it with a Angelic Wall, but when he attempted to block the Tiger next turn with the wall, Fuller used Sylvan Might to kill off the wall and to deal one damage to Maher. Maher then Kirtar's Desired the tiger but not to be outdone, Fuller enchanted the tiger with a Psionic Gift. Fuller, who has drawn no other creature spell, passed the turn with a Muscle Burst and a Syncopate in his hand. Maher cycled a Shelter at the end of Fuller's turn to find some threats. Fuller finally drew another creature, Krosan Archer, a pretty good one versus a Blue / White deck. Maher's attempt to make the archers have Second Thoughts was Syncopated. Eventually the ground stalls when the archers are Kirtar's Desired. Fuller is frantically searched for something with his Cephalid Looter but he kept on drawing land after land. Maher then breaks the stalemate with a threshold activated Wayward Angel. The angel however had to take one for the team as it died to a Muscle Bursted, Sylvan Mighted (flashbacked), Krosan Avenger. Maher's newly played Mystic Zealot is forced to black a Centaur Garden enhanced Krosan Avenger as he is at a precarious life total that the gifted tiger slowly chipped away at. The improved quality of Fuller's draws with the help of the Cephalid Looter eventually allowed Fuller to overwhelm Maher with 2 elephants via Call of the Herd. 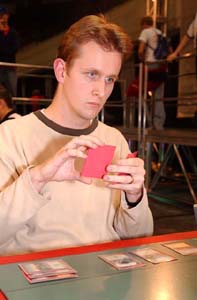 Maher went first and started off fast with a Mystic Visionary. Fuller responded with an Escape Artist on his turn. Surprisingly Fuller was unwilling to trade the Escape Artist for the Mystic Visionary (or Shelter) but his reasoning is revealed when he played a Call of the Herd the next turn. The first elephant is Kirtar's Desired, but the second elephant held Maher's 2/2 creatures at bay while the Escape artist tings Maher one point at a time. Fuller's attempt to hasten up the beatings via a Balshan Griffin was Syncopated. Fuller then played a Krosan Avenger and a Cephalid looter the next turn and a dejected Maher can only pass his turn. With Maher tapped out to cast a Limestone Golem, Fuller sent the second elephant, and the Krosan Avenger into combat. The avenger is able to take out the Patrol Hound and Auramancer with the help of Sylvan Might, and the Elephant token is able to take out the Limestone Golem when the first elephant token becomes Psionically Gifted. Maher's life total is slowly diminishing by 2 a turn from the gift and the Escape Artist. Meanwhile Fuller was also improving his hand with his looter and played a second looter. Maher turned things around by Aura Grafting the Psionic Gift onto his Patrol Hounds, which then killed the pair of looters. Maher played an Aven Flock, but Fuller responded with a Springing Tiger. Maher then played a Mystic Zealot and a Mystic Crusader, but the latter is Syncopated by Fuller. With a Patrol Hound, Aven Flock and Mystic Zealot on defense, Fuller attacked with his Springing Tiger and was able to take out the Mystic Zealot and Patrol Hounds with the help of the Sylvan Might. Neither player had a play, but with Maher at 5 life he was not able to race the Escape Artist with his Aven Flock. Maher bought himself a turn by sending the Escape Artist back to Fuller's hand with a Second Thoughts. The next turn Maher played a Wayward Angel. The angel was enough to able to race the Escape Artist and Maher trampled over for the last points of damage. 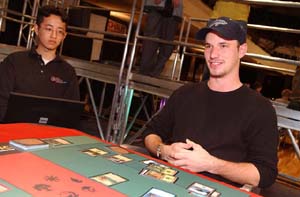 Fuller elected to go first but is forced to mulligan when his hand had only one land and several high casting cost cards. Fuller put on the early pressure with a Call of the Herd and an Escape Artist, and Maher responded with Aven Fisher and Auramancer. Fuller Dematerialized the Aven Fisher and attacked for 4. Maher's next play was an Aven Flock, which traded with the first elephant token when Maher Double blocked along with the Auramancer. Fuller then made the second elephant and passed the turn. Maher took this opportunity to play the MVP from the last game, the Wayward Angel. Fuller hoped to force damage though by attacking with his elephant token into the angel, thinking Maher wouldn't block in fear of a growth spell. Maher did not buy the bluff and blocked, leaving Fuller with an Escape Artist and a freshly cast Cephalid Looter. Maher then played a Mystic Crusader and a Phantatog, which was Syncopated. Fuller used the looter in a desperate attempt to look for an answer for the Wayward Angel, but all he could find was an Aven Flock. Maher, now on the offensive, sent his entire team and the Mystic Crusader and Aven Fisher traded. A flashbacked Dematerialize only slowed the inevitable, as the Wayward Angel delivered the final hits in the next few turns