Round 3: Brian Kibler vs. Darwin Kastle 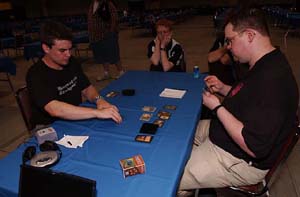 Kastle- "For Houston we thought Tinker was going to be one of the two big decks, and that's the main reason I played this deck (The Rock). This should be like a bye."

Kibler double mulliganed to start; this was the third game in a row that Kastle's opponent started with five cards. Kastle played Cabal Therapy naming Grim Monolith. Kibler had it, along with Upheaval, Thran Dynamo and Tangle Wire. A second Therapy took out Thran Dynamo, and Kibler was stuck with Rishadan Port and City of Traitors as his only lands. Kastle cast Vampiric Tutor (likely getting a forest), and summoned Llanowar Elves.

Tangle Wire tied up Kastle's resources for a few turns, and he played a second Elves. One was sacrificed and Cabal Therapy was flashed back to take Upheaval, leaving Urza's Blueprints, Thran Dynamo, Mishra's Helix and Masticore in Kibler's hand. The other was flashed back, and got rid of the Masticore. Haunting Echoes followed, taking all the Upheavals, Masticores, Dynamos and Monoliths out of Kibler's deck. On the following turn Kastle played Birds of Paradise and Yavimaya Elder, leaving him with no cards in hand. 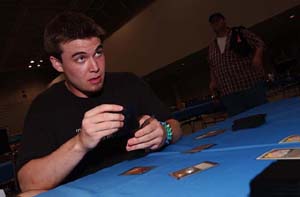 Kibler got himself back in the game, using Thran Dynamo and Voltaic Key to get out Urza's Blueprints. Kibler drew two cards by untapping the Blueprints with Voltaic Key. This would have been really bad for Kastle if it continued, but he used Vampiric Tutor to get Pernicious Deed and clear the table. Kibler came right back with Phyrexian Processor, setting it to eight. Kastle player another Deed, and Duress on the following turn, seeing Stroke of Genius, Phyrexian Colossus, Tangle Wire, Mishra's Helix and Tangle Wire- Kibler lost the Stroke. Kastle used the Deed, destroying a Key and the Processor along with the token. Ravenous Baloth followed, while Kibler had Metalworker, which died right away to Diabolic Edict. Tinker turned Tangle Wire into Crumbling Sanctuary, giving Kibler a little more breathing room since he was at two life and staring down a Baloth. 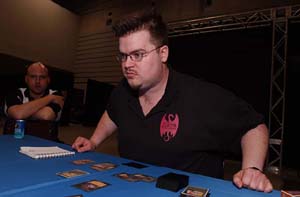 Kibler mulliganed his opening hand. Duress took away Processor and revealed Masticore, Stroke of Genius, Tangle Wire and Metalworker. Kibler's only land was the City of Traitors he had in play. The Metalworker came out, and Rishadan Port buried the City. Cabal Therapy took care of Masticore, and a second got Tangle Wire. Without many options left, Metalworker attacked for one and the Port was activated on upkeep. Kastle played Treetop Village, while Kibler got a second Port. Diabolic Edict killed Metalworker, and was followed by Llanowar Elves.

Kibler played Ancient Tomb, and Kastle had Pernicious Deed. Stroke on end step gave Kibler two cards, and he used both Ports on Kastle's upkeep. Duress took Voltaic Key, leaving Kibler with only Ancient Tomb in hand. Yavimaya Elder gave Kastle a little more to work with, as he had Kibler at a loss for resources but not much pressure on the board to take full advantage (although he did have Deed as an insurance policy). After a few turns, Voltaic Key was Tinkered into Masticore, which could shoot down Kastle's two creatures and survive Deed. Regardless, Kastle had Edict to handle it and won the match.