Round 3: Chris Allen vs. Andrew Gordon

Doesn't it always seem to be the case? You come to a big tournament with your team mates or friends, kick back for a few rounds while you've got byes, and then find them sitting across the table from you in your first round. Allan and Grain both represent team Card Heaven, one of the powerhouse teams in Australian Magic. After spending the last two rounds discussing their decks and play testing against each other, the two found themselves paired up in round 3. At least the play test matches were closely fought and this promises to be an excellent game.

Allan won the die roll and elected to draw and Gordon decided to even the score by forcing the play mat to be flipped. After a small amount of deliberation the two players kept their hands and Gordon lead with a Viridian Longbow. Allen had no turn two play and Gordon continued to improve his board with the protection from artifacts backed Tel-Jilad Chosen. Granite Shard was the first play from Allen and he sent the turn back, allowing Gordon to attack with a Battlegrowthed Chosen. Gordon failed to play a third land and pushed the turn back across. Seeking to capitalize on the situation, Allen used Creeping Mold to destroy one of Gordon's forests. All Gordon could do was attack with his Chosen, dropping Allen to 14 life and pass the turn, now with only a single land. 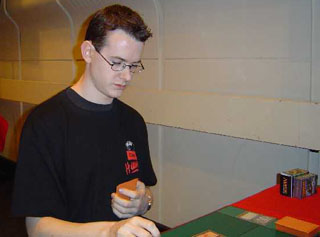 Allen continued to gain control of the board, using Arrest on the Chosen and then pinging Gordon at the end of the turn when he once again failed to play a land. Allen played out Leonin Sun Standard with only a solitary plain in play, despite never missing a land drop. He then brought down his first creature, an Elf Replicant, and passed the turn. Gordon managed to find an Island but with only two lands had no play. The Elf crashed into the zone and was backed up by a Clockwork Condor. Gordon was still stuck on two lands and played out the card he drew, Leonin Scimitar. The Condor and Replicant entered the red zone and get pumped by the Standard. Failing to draw anything worthwhile Gordon conceded game one.

Gordon decided that he would have a better chance in game two if he changed his blue out for red and spent the sideboarding time switching 12 cards in his deck. Allen on the other hand thought he would be better off adding in more land and land destruction and sent a judge off for a trip to the land station.

Gordon elected to draw in the second game, mirroring the decision of his teammate in the first, but it was he who made the first play on turn one with a Pyric Spellbomb. Allen was more than happy to put down an Iron Myr as bait for the bomb but Gordon refused to bite. Gordon played down a Myr of his own of the copper variety and sent the turn back. Sculpting Steel from Allen copied the Spellbomb and was used to destroy the Copper Myr. Unfazed, Gordon dropped a Silver Myr on the next turn still holding back his own Spellbomb. Allen continued to press his mana denial strategy, using Creeping Mold to take out the newly summoned Myr and then sent his own Myr into the red zone. With nothing to summon Gordon simply played out a land and passed the turn back.

Clockwork Vorrac joined play on Allen's side and in came the little Myr again. Gordon shut down the board with his Tel-Jilad Archers and all Allen could do was summon a Bottle Gnomes and pass the turn. Gordon cast Serum Tank and then Viridian Longbow, dropping another counter onto his tank. Allen cast Molten Rain on a forest, cutting Gordon down to a single forest and three Mountains. Using his Serum Tank to draw a card, Gordon refused to die to mana screw again, dropping down another forest. Allen had no play on his turn and when Megatog entered play for Gordon it looked like he might be in some trouble, but at least his Clockwork Vorrac was growing. 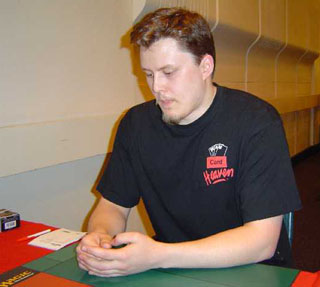 Hematite Golem entered play, putting a counter on the tank for Gordon and Allen passed the turn. Gordon dropped down a Granite Shard giving him a win condition, all be it a 20 turn one. Clockwork Condor entered play for Allen and it continued to fuel the tank, which was active for Gordon, drawing him a card a turn. Gordon used the tank again in his main phase and then strapped the Longbow onto his Megatog, cutting the time clock in half. Gordon sent his archers into the red zone and then backed them up with another one.

Allen then went on a Journey of Discovery to draw out a mountain and a forest from his deck, but had nothing to summon. Gordon tanked at the end of turn and then pinged away, dropping Allen down to 14 life points. Wurmskin Forger then put two counters on one Archer and a single counter on another, pushing them both into the red zone. Allen took 7 points of damage to his dome and watched helplessly as a Tel-Jilad Chosen entered play. The Vorrac was steadily growing on the other side of the table making its way to 11/11. Allen then dropped down a Bonesplitter and a Clockwork Condor, strapped into the Vorac and sent it into the red zone. Megatog, Tel-Jilad Chosen and the Forger blocked, with the tank being eaten by the Megatog before damage. Lethal damage was assigned to all the creatures with 3 trample points coming over the top. The Megatog shot Allen with damage on the stack and then ate the Longbow keeping itself alive. The blocking combination did just enough damage to kill off the Vorrac after one of the counters was removed and Allen had no choice but concede.

Gordon had managed to draw a forest and played out a Yotian Soldier after his attack phase. Allen then kicked out a Journey of Discovery getting himself two Mountains and passed the turn. The Chosen attacked again and Serum Tank made an appearance for Gordon but it was nowhere near as good as Allen's Tower of Murmurs, which threatened to mill away Gordon's 27 card library in 3 turns. Gordon continued to press the attack sending in the Chosen and summoning a Myr Enforcer and the race was afoot! With Allen going for the decking and Gordon going for the damage who would be the victor?

The Enforcer, Soldier and Chosen pushed themselves into the red zone, backed up by a freshly summoned Enforcer. Gordon got milled for 8 and Allen had no option but to pass the turn, pinning his hopes on the tower that couldn.t be activated if he cast any other spells. The two Enforcers, the Yotian Soldier and the Chosen crunched in again with the Myr blocking one. When Viridian Shaman resolved after combat and took down the Tower Allen had no choice but to extend the hand.