Round 3: Chris Benafel vs. Nicolas Olivieri 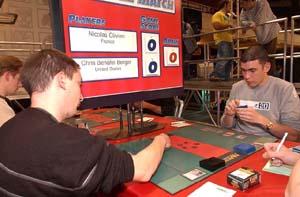 Guaranteed $6,500 at this point, Nicolas Olivieri and Chris Benafel have nowhere to go but up. Olivieri you may remember from Pro Tour New York when he and the rest of Les Plus Class came in second, and who could forget the charismatic Chris Benafel of ABU, whether as Grand Prix winner or 0-0-4 in the Standard Constructed portion of Worlds.

Benafel won the flip, and chose to draw. Olivieri was quickly on the board with Pilgrims of both Virtue and Justice, excellent against Benafel's red-black deck. Benafel played Innocent Blood, dealing with the pro-black Pilgrim.

Olivieri followed up with Lieutenant Kirtar. Benafel Flame Bursted it at end of turn, but Olivieri chose to sacrifice his Pilgrim to protect it. That suited Benafel fine, as the wealth of burn in his deck meant Kirtar wouldn't be a significant factor. Benafel dropped Famished Ghoul, and when Olivieri played out Aven Fisher, showed him the might of Shower of Coals. 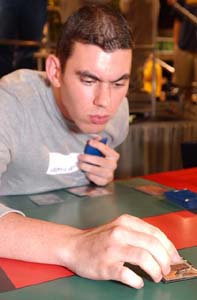 Benafel kept the hits up. Olivieri dropped Thought Eater and Patrol Hound, and Benafel's five mana meant that Firebolt would get them both eventually. It took out the Hound for the time being, and Pardic Firecat hit the ground running. Olivieri fell to thirteen.

However, all was not lost for Olivieri. His Resilient Wanderer threatened to hold off Benafel's creatures while Thought Eater hit for two. Benafel threw caution to the wind and swung with Firecat and Ghoul. Ten seconds passed, and Olivieri tried to block with his Wanderer. Benafel stopped him and said he had an effect before blockers were declared. Olivieri thought they were past that point. Head Judge Cyril Grillon was called in, and after some confusion over the length of time passed, handed Benafel a warning for not making his intentions clear to his opponent.

With that resolved, Benafel played Flame Burst on the Wanderer before it could block. Olivieri pitched Puppeteer to save, but Benafel had a second Burst. Olivieri threw his last card, Amugaba. Benafel played Ghastly Demise. Olivieri topdecked Patriarch's Desire to take care of the Ghoul, but Benafel went one better and found Anarchist to get back Shower of Coals. Surprisingly, the game ended in his favor. 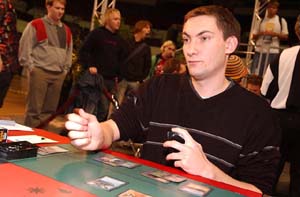 Game two continued in the same vein. Barbarian Lunatic took out a Puppeteer. A second Lunatic hit the table after Olivieri missed his fourth land drop. Famished Ghoul followed. Olivieri's only response was a Thought Eater that forced him to discard three cards. Benafel took it out with Firebolt.

Olivieri found his fourth land in time to play Aven Fisher and watch it die to Engulfing Flames. He won the game without having to use the two Flame Bursts in his hand.