Round 3: Chris Pikula vs. Jon Finkel 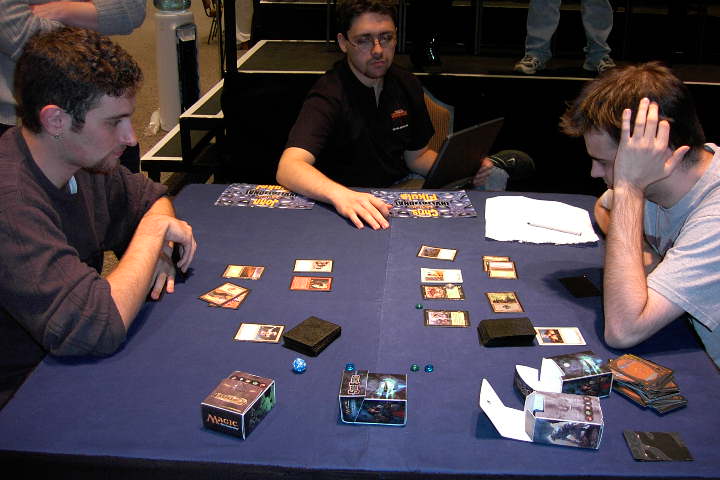 This match featured Pikula's more common configuration of twelve-land w/b versus Jon Finkel's ten-land r/w special. Is it this land difference that has caused the difference in records so far, or is it as Jon complained, Icatian Javelinier advantage each of his opponents has won so far.

The match started off with each person taking a mulligan, a quite common occurrence in Mark's current duplicate sealed incarnation. Jon scored first card advantage blood in the game with a well-timed singe in response to Hope Charm, but Chris still maintained some board advantage with a Capashen Standard on a Sarcomancy Token. Jon mustered some offense but Chris kept swinging away with his 3/3 zombie, even going so far as to Fyljga it. At two life, Jon slammed down Smite on the "gigantic zombie", restoring parity on board, and even mustering an offense with a Capashen Standard of his own on his Laccolith Whelp. The action whittled down to a battle of three 1/1's on each side, each side controlling a Nomad En-Kor. Jon wrested control from his Chris, with Jon controlling the only creatures and Chris' own Sarcomancy adding to the beats. With both players on 1, and Chris facing imminent death, Chris pulled . . . the Maggot Carrier, salvaging the draw.

Looking at the players, one immediately notices a difference in their demeanors. Chris Pikula constantly was gripping his head and rubbing his forehead in consternation. Finkel, on the other hand, had eyes that roved from card to card, perhaps leading to some calculations that are beyond the lesser players that are the rest of us. This is not to say that Chris Pikula is not of the highest caliber of player, but one can almost sense from Jon something beyond. 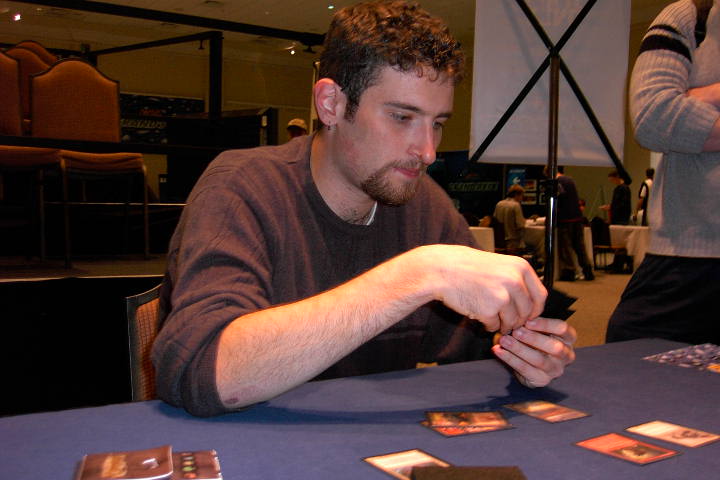 Game 2 started of a bit better for both sides, without mulligans that is. Pikula though garnered an early advantage, creating a 3/4 Holy Sarcomancy token by turn two. Jon controlled the madness with a Hope Charm on the Holy Strength, but his creatures were as expected all 1/1's. Chris could have been a bit better had he actually played the Vebulid in his hand on turn two along with the Holy Strength, but he must have been too excited with his Holy Zombie to worry about inconsequentials. The game situation quickly disintegrated for Chris after he failed to notice the interaction between the banding Flying Camel and the Super-tough Tireless Tribe, and Finkel commenced the beats with Goblin Balloon Brigade and Duct Crawler. Chris gave up four life to Nasty Spite the Brigade with Crown of Flames but the Duct Crawler continued to peck away. Jon eventually drew Mob Mentality, which would have ended the game quickly on the Flying Camel, but Hope Charm saved the day for Chris. Though Chris managed to contain the fast beats, the Duct Crawler inexorably pecked his life to zero. 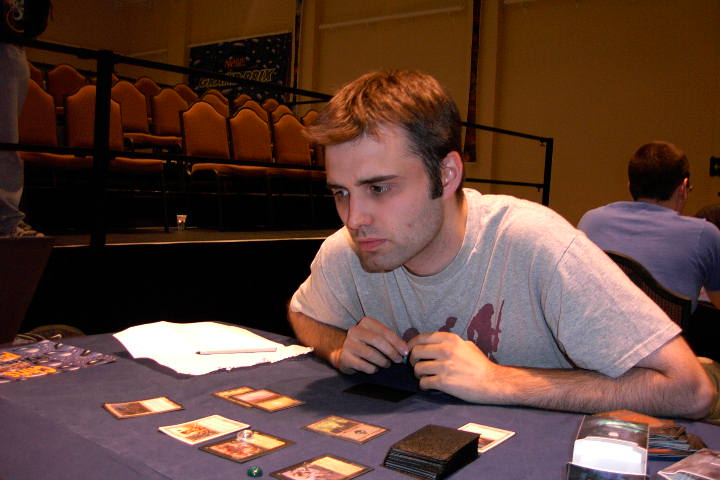 With his best result in the past two games a draw, Chris began to look a bit worried. In game two he continued his tradition of enchanting his 2/2's to even further dwarf the 1/1 that was the norm. With early fatty beats, Chris was able to get that last few points through for game two. So, with the score tied 1-1-1, the fourth and hopefully deciding game commenced and quickly came to grinding halt, the players stalemated at ten life each. Chris' Vebulid continued to grow each turn though, yet it was unclear if Chris had a way to actually hit his opponent with this Kamikaze. When the Vebulid reached 11/11, Chris revealed his plan, Cursed Fleshing the beast and sending it through Jon's fearful red and white horde for the win.