Round 3: A Clash of Styles

Gomersall is fresh off of a Grand Prix victory in Ravnica Limited, but will freely admit to you that Constructed is not where his strengths lie. He's hoping that the last three weeks spent having fun (and testing) in the sun here in Hawaii will change his luck and result in a stellar finish. He's looking to his Zoo deck sporting maindeck Flames of the Blood Hand to do it for him. 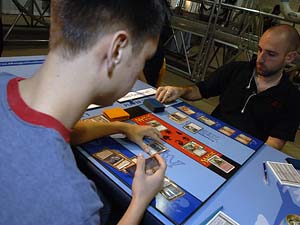 Sitting across from Sam is youthful Kyle Goodman, a player who has the exact opposite strengths of Mr. Gomersall. Kyle has never done particularly well in Limited, but can consistently be found lurking at the top of the standings at practically every event he attends.

Technically he qualified for Hawaii on the back of a PTQ victory, but he doubled up just a week after that qualification with a Top 8 appearance down at Grand Prix-Charlotte. Goodman's weapon of choice this weekend is a black-white attrition deck featuring Ravenous Rats, Dark Confidant, Umezawa's Jitte, Ghost Council of the Orzhova, and a host of removal spells.

Gomersall kicked things off with a mulligan from his side, but came out strong anyway, casting Isamaru and Savannah Lions, while Goodman answered back with a pair of Ravenous Rats and Umezawa's Jitte. Gomersall's lack of a third mana source left him unable to cast a Char to keep counters off Kyle's Jitte, and the game rapidly went downhill from there.

Ink-Eyes, Servant of Oni hit play for Kyle two turns later, and even though Sam finally found his third land and could cast all his spells, it wasn't enough to stem the tide of Goodman's beatings, especially when Sam's own team turned traitorous.

Gomersall had a much better start in Game 2, casting a pair of Kird Apes on the first two turns of the game, then Burning-Tree Shaman on turn three. For his part, Goodman cast Dark Confidant, Shrieking Grotesque, and then Ghost Council of Orzhova, giving his deck enough early action to match Zoo - an impressive feat.

Gomersall just kept drawing more creatures though, then drew a Lighting Helix with just enough damage on the board to finish Goodman off and even the match at one game a piece.

This time it was Goodman's turn to mulligan on the play, wincing as his second-turn play was a meek Cry of Contrition compared to Gomersall's Watchwolf and display of all three colors.

Unfortunately for the Brit, Sam had no other creatures on his turns, but he did have a stick-packing Wolf on turn 4, killing a Dark Confidant from Goodman with a counter. Goodman offed the Jitte with one of his own, but that just made the second Jitte in Sam's hand relevant.

At that point it was all over but the shouting, and Gomersall had more than enough burn in hand to finish what the Wolf had started.