Round 3: "Counts for Doubles!"

aulo Vitor and Willy Edel hail from Brazil and have been playing together for quite some time. You might remember their finals appearance at Pro Tour-Charleston last year, which helped secure their 11 combined Pro Levels for this season. Julien Nuijten and Kamiel Cornelissen are no slouches either, with multiple Top 8s and a World Championship under their belts. They're in San Diego from the Netherlands and have been teaming together since the World Championships this past year.

Before the match started, Julien got some minor heckling from onlooker Quentin Martin, who teased him about the number of Pro Tour Top 8s he has (one), but the youngster pointed out he actually won that Pro Tour. 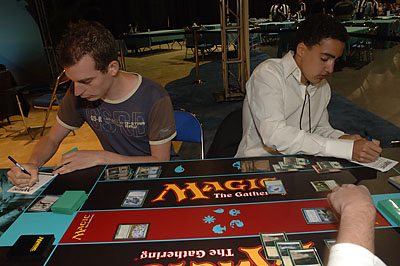 Kamiel and Julien won the die roll and elect to play. The elder statesman Kamiel, unhappy with his first hand, opted to try another seven, while Julien was content with his. When Bret Blackman dropped by to watch the match, his own soundtrack loudly spilling into the arena from his iPod headphones, Julien turned to him with a friendly warning: "Bret, you should turn your music down for two reasons: one, it's too loud for us, and two, you're going to hurt your ears. Didn't your mother ever teach you that?"

Kamiel kept his second seven, and the Brazilians opted to stick with their original hands. Julien opened on Mountain, Kamiel on Island, then shipped. Paulo had Plains while Willy had Forest, suspend Durkwood Baloth. The Dutch players add a Looter il-Kor to their board, but that quickly bit it at the hand of a Flowstone Embrace from Willy Edel.

Not to be outdone, Julien aced the Durkwood Baloth with an Elvish Riftsweeper. The irony of the play, which the Brazilians developed and successfully used in their green-white decks at the recent Block Grand Prix in Montreal, was lost on no one. Willy gave a sidelong glance at Paulo, who shrugged, dejectedly.

Kamiel looked to be playing blue-black with a possible white splash to pay for the morph on Whip-Spine Drake. Julien was an aggressive green-red deck. The Brazilians, on the other hand, paired white as the complement in their blue deck, which Paulo was using, though they stuck with the green-red plan for Willy.

After a few attacks with Riftsweeper, the life totals stood at 30-26 in favor of the Dutchies. They also added two 3/3 flyers to their board in the form of Whip Spine Drake for Kamiel and Giant Dustwasp for Julien. The Brazilians had drawn an extra card from the unsuspension of Nantuko Shaman and played an Aven Augur. When they attacked with the Augur into the 3/3 flyers, however, the Dutch players smelled a trick and simply took the damage. Post-combat, Paulo tried for an Erratic Mutation on the Dustwasp, and the tapped out Europeans were hapless to intervene.

Paulo's deck, on the other hand, did intervene, revealing a Sunlance, and the Brazilians inadvertently wasted not one but two removal spells (at least unless they managed to shuffle Paulo's deck).

Julien and Kamiel bashed back with their flyers, dropping Paulo and Willy to 20, then killed the Aven Augur with the Dead portion of Dead // Gone before passing. With the turn back, Edel and Rosa discussed possible plays. Eventually they settled on Giant Dustwasp for Willy, which set the Dutch players to whispering. The decision was eventually made to Cancel the Brazilian's plans, but Paulo has a Lucent Liminid to give them a 3/3 flyer anyway before passing the turn to the Europeans.

After the Dutch players finished their turn, the board saw Willy Edel with an Island in addition to his Forests and Mountains, the Liminid dead from a Sudden Death, and the life totals at 28-14 in favor of the Dutch players, who continued their assault with Riftsweeper, Dustwasp, Whip-Spine, and a Veiling Oddity counting down from four counters in the suspend zone.

In an effort to catch back up, Paulo tossed another Erratic Mutation at the Whip-Spine Drake.

Julien: "Well, you didn't hit last time, did you?"

Paulo and Willy could do nothing but laugh. Fortunately for them, the joke was on the Dutch players, who saw a Knight of Sursi revealed, ending the Drake's reign. Willy added a Sporesower Thallid to the board, Paulo played a second "removal" spell by Snapping Back the Giant Dustwasp, and the Brazilians shipped the turn.

Kamiel played an Evil Eye of Urborg, which prevented all his other creatures-but not Julien's-from attacking, and Julien suspended Dustwasp, short the fifth mana he needed to play it after getting his Mountain Mwonvuli Acid Mossed previously. The Brazilians answered the Eye with a Riddle of Lightning, revealing Intet, the Dreamer, then bashed with Sporesower Thallid and Citanul Woodreaders. Julien blocked the 1/4 with his 2/2 Riftsweeper, and they dropped to 21 to the Brazilians' 14. The Brazilians, not interested in losing the race, played a Jedit's Dragoons to boost their life total back to 18 before ending the turn. 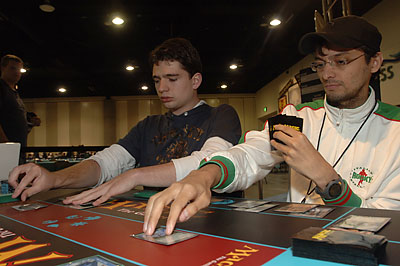 When the Dutch team started their untap, they were staring down a Sporesower Thallid, Jedit's Dragoons, Thornweald Archer, and Citanul Woodreaders, and were slowly losing the tempo they seemed to have so solidly in hand just a turn prior. Not all was bad, however, as they still had the Riftsweeper with a Giant Dustwasp at three suspend counters and a Veiling Oddity on two. After mulling their plays for the turn, they added a Keldon Halberdier on Julien's side, then shipped back.

The Brazilians attacked with the vigilant Dragoons to tie things at 18 all. Willy added Intet, the Dreamer after combat and when Paulo played his second Aven Augur, they threatened to run away with the match.

Not all was at it seems, however. When they got the turn back, the Dutch players immediately went into the tank, figuring out the best way to deal with the imposing board position their opponents were building. Julien was sitting on not one but two Grapeshots as well as an Essence Warden, which could turn into a huge rout if he managed to draw a second Mountain in time. A Midnight Charm on Willy's Thornweald Archer sent the Dutch players to 20 before Julien added the Essence Warden to his board. Kamiel played Body Double, putting them up another life and copying himself a Giant Dustwasp. Having determined that too much was at risk, Julien was forced to Grapeshot the Aven Augur for 2 and each of the opposing Two-Headed Giant's heads for 1, dropping Willy and Paulo to 16.

The Brazilians fought back, attacking with Intet, the Dreamer and Jedit's Dragoons. The Body Doubled Giant Dustwasp stepped in front of the 2/5, but Intet got through for 6 and a free card set off to the side. Post-combat, a Utopia Vow made sure the Dustwasp wouldn't be blocking or attacking anytime soon, and Paulo made a Calciderm, undoing a point of damage from their attack thanks to the timeshifted Soul Warden, though neither team remembered until the Dutch players had untapped.

It promised to be a big turn as the Veiling Oddity hit play for the Europeans, allowing them to attack for 9 from the Oddity, Essence Warden, Halberdier, and Riftsweeper, leaving their opponents at 7 and themselves at 19 once Julien played an Aether Membrane. They shipped the turn facing a potentially large counterattack with their only blocker being the 0/5 wall, but Willy and Paulo indicated they would not be alpha-striking in return by not removing three counters from their Sporesower Thallid to make a Saproling.

When the Brazilians started their turn, the tides had again switched. They sat at 7 life staring down an Aether Membrane, Veiling Oddity, Riftsweeper, Keldon Halberdier, Essence Warden, and a Giant Dustwasp on a single suspend counter. They weren't exactly low on options, however, with a Calciderm, Intet, two Citanul Woodreaders, Sporesower Thallid, and Jedit's Dragoons.

They started the turn with a Llanowar Empath, scrying two to the bottom and blindly revealing… an Akroma, Angel of Fury! Quite a peel, but they weren't out of the woods yet. They discussed a possible attack, but swinging with Intet risked having it returned to their hand by the Aether Membrane, forcing them to replay it and costing them any cards removed by its ability. Even worse, their opponents could simply soak up the six damage and crack back with an unblockable Giant Dustwasp!

Ultimately they opted to attack with Calciderm and a Woodreaders, neither of which the Dutch players were willing to block with their Aether Membrane. Willy played a not-so-mysterious morph, putting the European players on 14, and the Brazilians shipped the turn.

The Dutch players untapped, removed the final counter from their suspended Dustwasp, and drew their cards for the turn. Their first play was a Midnight Charm tapping Intet. That allowed their Dustwasp to get in, dropping the Brazilians to a lowly 4 life and leaving the Dutch players in solid position. A Grinning Ignus from Julien gained them a life, but the real reason for playing it soon became apparent: to provide enough spells to make the second Grapeshot he had been holding much of the game lethal, with three storm copies sending the W to the players from the Old World and the Brazilians off to fight for a 1-1 record from the pod.

Things remained light, however, as the precocious Julien offered a piece of gum to each player at the table before taking one for himself. Neither opponent took him up on his courteous offer, but both teams wished each other good luck for the remainder of the day.