Round 3: Cyanide (A Loving Tribute to Poison)

Kenny Öberg burst onto the scene in 2008 when he made the Top 8 of Pro Tour: Berlin with his innovative Tezzerator deck. While Vidugiris Vidugiris is yet to Top 8 a Pro Tour, he has five Grand Prix Top 8s (including two wins) under his belt. Öberg and Vidugiris have made names for themselves on the Pro Tour thanks to their consistently solid play and their outside-the-box approaches to formats that most players have given up on. While many players are loudly exclaiming that there's no room for innovation, Öberg and Vidugiris are busy figuring out ways to win with completely new concoctions. 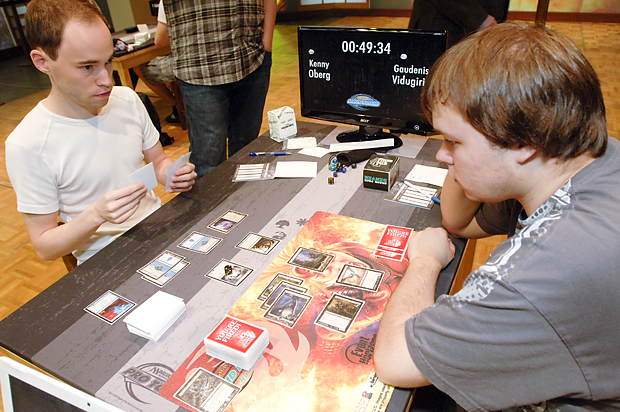 Kenny Öberg and Gaudenis Vidugiris lock horns in the 2-0 bracket. This weekend is proving to be no exception, as both players enter the third round sporting 2-0 records with decks that were completely off most players' radars. Öberg showed up to the match with a nearly mono-blue Grand ArchitectBirthing Pod deck, while Vidugiris shuffled up Mono-Black Infect.

Gau won the roll and used a Despise to take a Treasure Mage, leaving Kenny with a hand of Kuldotha Forgemaster and five lands. The next play came on turn three when Vidugiris cast a Phyrexian Crusader. Öberg attempted to slow the bleeding with a Spellskite, but Vidugiris was ready to take the fight to the air with a Whispering Specter. Upon seeing the Whispering Specter hit his opponent's side of the board, Öberg could only say "Whoa," indicating his surprise and his respect for the flier. Öberg ran out a Birthing Pod and upgraded his Spellskite into a Treasure Mage that searched up a Contagion Engine. 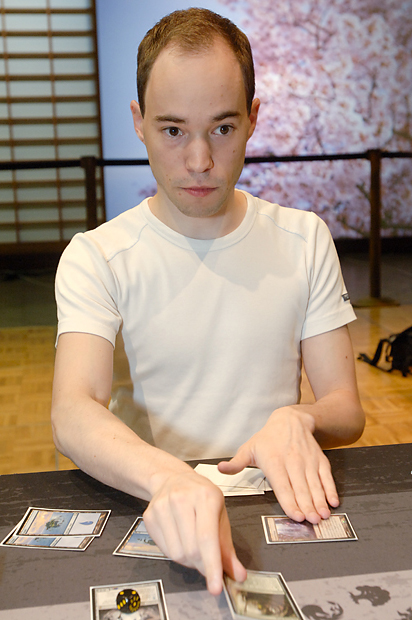 'Tezzerator' Öberg left the Tezzerets at home this weekend. At the end of Öberg's turn, Vidugiris used a Dismember to take out the Treasure Mage—an apparent misplay from Gaudenis. Since he had the removal spell in his hand, and he had clearly intended to use it that turn, couldn't he have just cast the Dismember on Spellskite in response to the Birthing Pod? That way Öberg would not have been able to search up the potentially game breaking Contagion Engine… All became clear when Vidugiris used a Mutagenic Growth to pump up his Whispering Specter. Between the Whispering Specter, the Mutagenic Growth, and the Phyrexian Crusader, Vidugiris was able to give five Öberg poison counters. Vidugiris then sacrificed his Whispering Specter to knock out his opponent's entire hand, including the Contagion Engine. Another Whispering Specter and a few attacks later, and the players were on to Game 2. Vidugiris 1, Öberg 0

For the second game, Öberg kept his opening seven while Vidugiris dipped all the way down to five cards. A first-turn Despise from Gau took a Kuldotha Forgemaster, leaving Kenny with a Birthing Pod, a Contagion Engine, and some lands. The spell-light Öberg spent his second turn attacking with an Inkmoth Nexus, while Vidugiris deployed an Ichorclaw Myr. When Öberg passed his third turn without casting the Birthing Pod (which was public knowledge thanks to Despise) or attacking with his Inkmoth Nexus, Vidugiris became a bit suspicious and opted to cast a Gitaxian Probe to see if there were any tricks waiting for him. 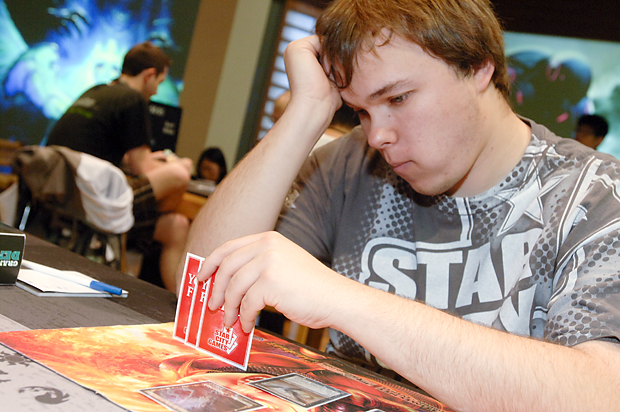 Gau for it! When Gitaxian Probe revealed that the only spells in Öberg's hand were a Kuldotha Forgemaster and two Birthing Pods, Vidugiris chose to attack his Ichorclaw Myr into his opponent's Inkmoth Nexus and then cast a Phyrexian Crusader. Öberg could do nothing but cast a Birthing Pod, while Vidugiris spent his turn adding an Ichorclaw Myr and an Inkmoth Nexus to his side of the board. A couple of blank draw steps for Öberg later, and Vidugiris was able to walk away from the table with a 3-0 record. Vidugiris 2, Öberg 0