Round 3: Dave Humpherys vs. Eivind Nitter 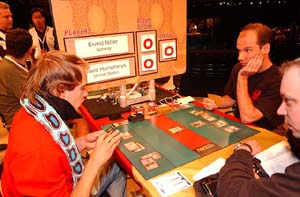 Your Move Games' Dave Humpherys is in the middle of a literal "Around the World in 80 Days" excursion. Having just received his doctorate in biology from MIT, Humpherys is now enjoying a little R&R, and has been to the British Isles, Tunisia, Scandinavia, and Southeast Asia, among other places, and is spending a week here in Australia before continuing on to New Zealand, Hawaii, and Alaska.

He brought he trusty "WonderTog" deck with him on his journey, which is a pretty normal Cunning Wish – Psychatog deck with a lone Wonder as another way to get the lethal 'Tog hit through.

His opponent is flamboyant Norwegian Eivind Nitter, blue plush snake draped around his neck and eccentric black/white/red Recoup-Burning Wish deck in tow. Both are 1-1.

Nitter opened with a first turn Duress, and debated whether or not to take the Fact or Fiction or a Memory Lapse.

"Don't forget... I'm very slow," Humpherys reminded him. Nitter agreed and took the Fact or Fiction, which basically added two minutes to the game clock. Nitter cast Tainted Pact and took the first card that turned up, a swamp, and then tried to resolve a Burning Wish. Humpherys Memory Lapsed.

Nitter resolved the Wish on his next turn, and got a Persecute, looking to wreck Humpherys' hand. Humpherys cast his own Wish—Cunning—at the end of Nitter's turn, and sighed as he chose Opt, hoping to use it to find black mana. Nitter laughed. "Since you can't wish for land, you have to take Opt. I have Overmaster for the same reason."

Nitter Persecuted, but Hump found a Memory Lapse with his Opt. "How lucky!" shouted the Norwegian. Humpherys played a Psychatog, and then the Persecute was finally allowed to resolve. Humpherys discarded a Deep Analysis and his Wonder.

"Not the best Persecute," lamented Nitter, before dispatching the 'Tog with Innocent Blood.

Humpherys countered Burning Wish and revealed a hand of all land when Nitter Recouped his Persecute. The door was open for Nitter to deliver the killing blow—Haunting Echoes—but he didn't have it in his hand. Instead he was holding two Vindicates and a Gerrard's Verdict that he couldn't cast due to a lack of white mana. 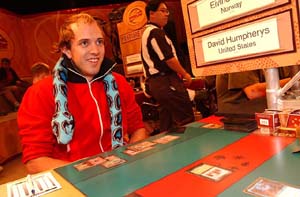 Humpherys flashed back his Deep Analysis and drew another. He refilled his hand and was ready with a Counterspell when Nitter finally drew the Echoes. Humpherys wished for his sideboarded Fact or Fiction and cast it, then cast another, and soon had the perfect hand. He threw out a Nightscape Familiar and a Psychatog and let the both die to Chainer's Edicts before wishing for a Mana Short to basically Time Walk on Nitter's next turn. Nitter asked if Humpherys had another 'Tog and a Circular Logic, and Humpherys showed him the goods. Nitter scooped.

"You should write how unlucky I was that I didn't draw my third color," Nitter said to me as he sideboarded. The funny thing is that it was true, but Humpherys never saw a white card or a white mana source, so he had no way of knowing.

Humpherys started off with a mulligan, but kept his six. Nitter had drawn a plains in his opening hand, which made him happy.

Humpherys stopped at two land and frowned when his Nightscape Familiar was killed with Innocent Blood. He did have two Counterspells for Nitter's Vindicate and Burning Wish and then eventually drew another Familiar. Nitter took advantage of Humpherys tapping out by dropping the Legendary bomb Mirari. Now Humpherys would need two counters for every spell.

Nitter resolved two Wishes, then two Addles, then a Recoup and two more Addles. Humpherys was way behind. But regardless of how much card advantage Nitter could generate, his only way to win was by decking augmented with Haunting Echoes, an unrealistic goal in a sixty-minute round against the methodical Humpherys. 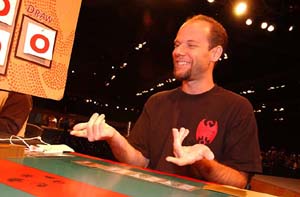 Humpherys managed to resolve a pair of his own Wishes, one to Recoil the Mirari and another to Coffin Purge a Recoup target. He was making life difficult for Nitter. But then Nitter Duressed Humpherys, found no counters, and cast Haunting Echoes, fully expecting Humpherys to scoop. But Humpherys looked at all his options, and tapped his last mana to flashback Coffin Purge on his own Psychatog, forcing Nitter to leave the other three in his deck. Nitter's eyes bugged out of his head and he muttered to himself in Norwegian. He cast his other Mirari and bore down, trying to finish Humpherys off.

With some way to win the game still in his deck, Humpherys had no reason to concede and the clock ticked down. Nitter gained full control, and in an untimed match he would certainly have won this particular game. But the clock is part of Magic, and it is unfeasible to expect to win many matches by holding the fort as your opponent draws his entire deck... on card at a time.

As the extra turns dribbled away, it was obvious that Nitter would end up one land short from being able to Wish for his lone Grasp and cast it with the Mirari for lethal damage. Humpherys showed him a Divert to invalidate that plan entirely, and the game ended in a draw, giving the match to Humpherys.

Nitter's countryman, Nicolai Herzog, suggested that a different sideboard plan is necessary against slower opponents like Humpherys. Yes, the Recoup deck can gain control and deck Psychatog, but you need a lot more time that the tournament allows to actually implement that plan.