Round 3: Dave Price vs. Eric Taylor 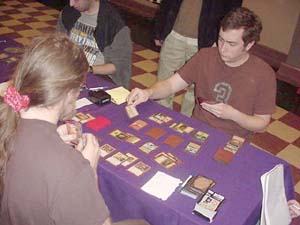 Two men who need no introduction are going to get one anyway. Dave Price, fan favorite and perennial Invitationalist, squared off against good ol' fossilized Eric "Danger" Taylor, winner of GP Milwaukee.

Eric seemed dangerously morose over his deck. "My deck is so bad!" he exclaimed, shuffling up his pile of cards with lackluster energy. "I'm not sure how my deck is. It's either really good or really bad."

Dave, showing not-so-genuine concern, asked Eric "What do you look so sad about?" "I'm awful!", proclaimed the state eldest of Magic. "I played twenty practice games with this deck and went 2-18." Dave responded in his trademark deadpan style. "All you need to do is string those two wins together."

The King of Beatdown won the coin toss, and opted to not beat down. Both players mulliganed, leaving them with six card hands. As the match started, Dave gave me this advice: "If EDT wins, be sure you write as sarcastically as possible about Magic being all skill."

As it turns out, both players brought Red/White/Green decks to the table. Taylor led off with a mana elf, but stalled on mana. Price summoned Glory Seeker, which Taylor matched with a Glory Seeker of his own. One combat phase later, the two soldiers lay dead.

This is when Dave began playing a plethora of mystery morphers. The first of four hit play (a Battering Craghorn), though it would never be revealed over the course of the game.

EDT got frisky with a Daru Cavalier, which searched out a brother-in-arms. The two soldiers started running rampant all over Price, reducing his life total to a precarious ten very quickly. Dave, on the other hand, played two more morphers (a Snapping Thragg and a Charging Slateback). He was stalled on five mana, and unable to reveal the 3/3 beater.

Taylor continued to bring the beats, starting an air force and air defense with Spitting Gourna and Dive Bomber. The Bomber ended up dying to the Slateback during combat, and Dave sought to hold off the attack with a Wellwisher and Gustcloak harrier. 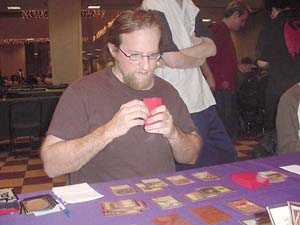 Dave sensed danger as Danger went large and in charge with a Symbiotic Beast and Daru Lancer. He Gaseous Formed the first striker, and cast his sole Embermage Goblin. Eric was ready with a Lavamancer's Skill on his Sandskinned creature, making the soldier quite adept at being the head Tim.

The Beast died on the next combat phase, littering the playfield with 1/1 insects. Eric spent two turns shooting creatures: Embermage Goblin and Gustcloak Harrier. This allowed Dave to gain enough life with the Wellwisher to put himself back in relative safety—because very quickly the game shifted because of one card:

Four turns later (accounting for one chump block with the Gourna), Eric lay charred and dead.

Just about then, Magic R&D guru Worth Wollpert showed up at the Grand Prix! He immediately flocked to former Deadguy teammate Price, and they engaged in a lively conversation about red. 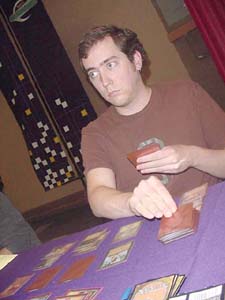 Worth: "Did you know that Lightning Rift originally was free? You could just cycle red cards, and have it do damage. Is that broken or what? It might still be too good."
Ben: "I guess we'll find out in two weeks"
Worth: "Randy says it's as good as the white one"
Tony "The Shark" Tsai: "Astral Slide?"
Ben: "He probably thinks they're both bad, since they aren't blue."

Both players built up lands the first few turns of the game. Dave cycled a Krosan Tusker to search for his third mountain, which he promptly used to cast Rorix Bladewing on turn eight. Since neither play had much of an established board at this point, the Dragon Legend quickly ended the match.