Round 3: DG in DC vs. www.westcoastgames.com 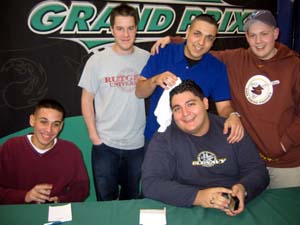 G in DC is two thirds of the Slay Pillage Gerard team that finished in the Top 4 of Pro Tour Boston last season with Craig Krempels replacing the retired Scott McCord. Craig was the runner-up in last year's Rookie of the Year race with multiple high finishes throughout the year.

Ben Stark was anchoring www.westcoastgames.com alongside his new roommate Antonino DeRosa and Pro Tour Yokohama Top 8 finisher Richard Hoaen. Ben Stark was fresh off of his first ever Top 8 appearance at a Pro Tour--also in Japan--at Pro Tour Kobe.

As the players shuffled up for the first games, Antonino looked wistfully at the match in the A seat, "I wish I was playing Craig."

"You play fast," explained DeRosa while glaring at Gerard.

Craig shrugged, "But I always win…you don't want to play me!"

Craig's Iron Myr powered out a turn three Spire Golem--his third land was Blinkmoth Nexus. Ben had three Swamps in play but no third turn play. He drew into Chittering Rats but Craig was able to keep his deck running with the cards in hand. He attacked Ben's hand with a Specter's Shroud. Ben drew a second Chittering Rats but he was facing four points a turn in the air and discarding a card. They quickly moved to the second game.

Antonino was surprised to see his teammate shuffling and asked Ben, "You won already?"

Ben sighed, "As impressive as my Rats were…he won."

"My deck doesn't care about Rats."

Craig had a turn one Bonesplitter and Ben sheepishly played a turn two Disciple, "Guess what I drew?" 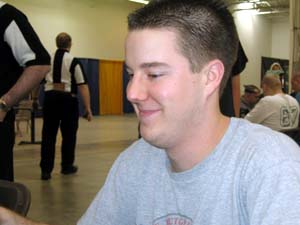 The game moved very rapidly and the paces seemed to favor Ben. Craig played Specter's Shroud but had not creatures in play for his two pieces of equipment. Ben stunted his hand with a Chittering Rats. Craig had a Neurok Prodigy but it could only look on as Ben played an Arcbound Hybrid and attacked for five.

The Prodigy attacked for two but could not pick up any equipment since Craig needed the mana for an Arcbound Crusher. He fell to nine on Ben's next attack and rolled his eyes as Ben played a second Rats.

Craig laid a Seat of the Synod that grew the Crusher. He double equipped it and attacked with both his guys. Ben put a Rat in the way and Craig blew the last card in his hand--Echoing Truth--to bounce both Rats and force Ben to take seven thanks to the trample of the Crusher.

Ben beat in for three and replayed both Rats but looked despondent, "I'm going to lose this game."

Craig double equipped the flier and got in for five and a card. He then took control of the tapped Hybrid with his top decked Domineer. Ben had one card in hand--Craig was empty--and the life race was even at six to six.

At this point Rich announced that he had lost his match to Jon. Antonino tried to get his opponent to smile. "C'mon Gerard gimme a smile. We slept in the same bed last night. The least you could do is smile. Jon won and Craig is going to win--just a little smile?"

Ben contemplated his potential attacks and threatened to send in a Rat. "The problem is I can't do math for the life of me."

Craig offered to help with his trademark grin, "I don't know what the card you are holding is…if you want to show me I can help you." Finally, Ben played a Viridian Longbow, "Arrgh the lucky Bow. Not good for my Prodigy!"

Now it was Craig's turn to figure out his attack step, "I can't do math either." While he was trying to figure it out the judge reminded Craig to put a counter on his Crusher for the Longbow--it is not optional-- and he brightened considerably. "I think that is really bad for you now."

He played an Ancient Den and grew the Crusher to 4/4. Both equipments went over to the Crusher and Craig turned his team sideways. There were no secrets from either player with zero cards in hand. "I did the math."

Ben weighed his options and ultimately double blocked and shot the Prodigy. Ben dropped to one and Craig went to five. "I drew a spell." He played Thoughtcast and put down a Neurok Prodigy holding onto a Myr Enforcer he could not cast. The Disciple got in for a point.

Craig tried to summon the top deck skills that got him into the Top 8 of Grand Prix Columbus, "What do I want to draw? C'mon Hybrid." He peeled his card, "So close." He sent in his 6/6 Hybrid and Ben blocked with the Prodigy and returned it with the Enforcer in hand. Craig played the Arcbound Bruiser he had ripped and everyone got a chuckle. 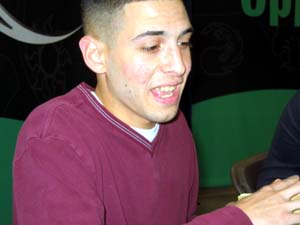 Ben replayed the Prodigy but had to put it and the Disciple in the way of oncoming traffic next turn. Ben was able to block and shoot down the Bruiser--making a 9/9 Hybrid--but he drew nothing on his next turn and the match was over.

Final result: DG in DC wins over www.westcoastgames.com 2 games to 1

1 Raise the Alarm 1 Turn to Dust 1 Stand Together