Round 3: Diego Ostrovich and Gary Wise vs. Carlos Romao and Eivind Nitter

If anyone's having fun at this Invitational, it's these four. Wise has enough energy for five men his size. Nitter is the consummate party animal. And they've drawn out the best in Romao and Ostrovich, getting them past whatever uncertainty they felt. They're laughing and throwing the trash-talk with the best of them.

Ostrovich double-mulliganed to start, and Wise was off to a sluggish start that lacked mountains. Things went downhill from there. Romao had Smother for Wise's first morph, and Nitter started Wellwishing. Ostrovich had a Battlefield Medic, but Romao got in with Skirk Commando and polished it off. Wise tried to tap out for Snarling Undorak and Nitter had a cycled Complicate to stop it. Then he added Symbiotic Elf. 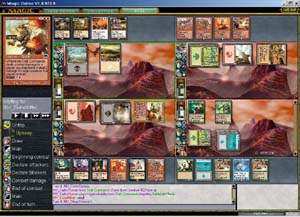 (click to open full-size in a new window)Going into Ostrovich's turn, his opponents were up three cards, as well as having three creatures in play to none for him and Wise. Things were not looking good.

Wise graciously offered his opponents a chance to concede and save face. Unsurprisingly, they refused. Blackmail stripped Ostrovich's Righteous Cause before he could find a second white. But things weren't over yet. Ostrovich ripped land number five for Cruel Revival on the Aven, then Wise busted out Goblin Sledder, Sparksmith and a face-down creature.

Symbiotic Elf swung and forced all the goblins but the Sparksmith off the table. Wise was happy with that result. They were still being outgunned, but they had a momentary reprieve. Romao's Slate of Ancestry did nothing for the time being. 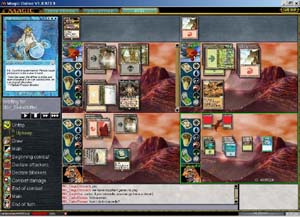 (click to open full-size in a new window)Aravax hit the ground running. Wise and Ostrovich began to ask for a quick and merciful death. All the same they tried their best to stave it off. Dispersing Orb was making everything impossible.

Doom Cannon was just an expensive waste of time for Ostrovich. Chain of Plasma took out the Avarax, but Romao had a morph to replace it. When he turned it over as Silent Specter, it was all Wise could do not to turn off his computer. In two attacks it was over.