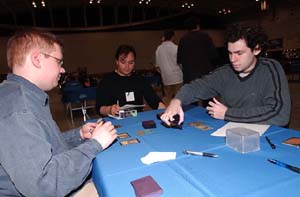 Tomi Walamies came within a hair's breadth of being out of Magic when he arrived in Venice earlier this year. The Finnish star ended up with a Top 2 performance that guaranteed him another year on the Tour. It also earned him a spot here at the final Masters Tournament. The format of Tomi's other Pro Tour Top 2? Extended at PT New Orleans when Kai Budde defeated him.

Diego Ostrovich is coming to the end of a pretty good year of Magic. In addition to a Top 4 finish at Worlds he also made the Top 8 of Grand Prix" New Orleans—also Extended—playing his "Elves!" deck that features Skyshroud Poacher, Deranged Hermit and Slate of Ancestry. Many observers were perplexed as to how Diego was able to defeat Brian Kibler in the final round of the tournament to earn his Top 8 berth.

Tomi remained one of those perplexed and took the opportunity during shuffling to ask Diego how he did it, " You beat Kibler with 4 Deed, 4 Tutor AND 4 Oath. How?"

Diego shrugged and grinned sheepishly, "He mulliganed twice in Game 1 and stalled on two land in Game 2." 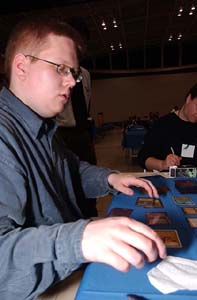 Diego kept his initial hand but Tomi could only shake his head at his Argentinean opponent as he went back to the well twice before keeping five cards he was comfortable with.

Diego patted his deck affectionately, "It makes the decks sour."

Diego opened with a Llanowar Elf and played another Elf and a Rishadan Port on his next turn. Tomi had played a 1st turn Bird of Paradise but did not truly accelerate his mana since Diego was able to start tapping a land on turn two—although he did manage to start scratching his way back form the mulligan with a wall of Blossoms.

Deranged Hermit hit the table on turn three. To do that he had to tap out and Tomi was able to keep his opponent's forces at bay with Academy Rector. When Diego paid the upkeep on the Hermit Tomi was able to play another Rector and hard cast Cabal Therapy—naming Masticore—seeing a Slate of Ancestry, Naturalize and a Forest.

Diego was one mana short of playing his Slate and activating it but had to settle for the artifact and a Call of the Herd and hope for the best. Tomi flashed Cabal Therapy back sacrificing one of his Academy Rectors and took Diego's Naturalize and plopped a Pernicious Deed into play. Tomi activated his deed for five and wiped out both sides non-land permanents and activated his other Rector and found a Future Sight, which promptly yielded a Brushland off the top.

That was pretty much game right there as Tomi tore through his deck playing spell after spell eventually finding the key cards for his deck including Phyrexian Ghoul, Pattern of Rebirth and Recurring Nightmare. Diego only managed to play a Call of the Herd and flash it and other back to chump block the potentially lethal Ghoul. Finally, Tomi found another Rector and sacrificed to find Parallax Wave and Diego started picking up his cards.

Tomi: "Future Sight will do that."

While the two players deliberated about sideboard choices they discussed Tomi's impending move to Austin, Texas for graduate school. It turns out that since Venice all Tomi has had time to do is prepare his senior thesis and attend lectures. He has barely had time to pick up a Magic card. "My practice for this Pro Tour consists of two Rochester Drafts... and I think it might be booster."

There were no mulligans this game and things got started with Bird of Paradise on both sides. Diego was threatening to explode out of the gate again when he played his second Forest and Rofellos, Llanowar Emissary. Engineered Plague naming elves put that plan on the back burner and had to go to the Baloth beatdown plan. Tomi answered back with a Phyrexian Ghoul. 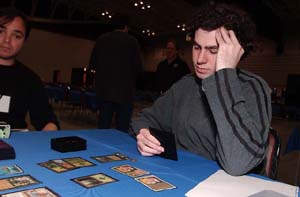 The Baloth swung past the Ghoul and Diego Living Wished for Gaea's Cradle and cast a Tangle Wire. The Wire slowed Tomi down for a few turns but Diego could mount no other pressure than the Baloth, which swung in more time before being blocked by a Yavimaya Elder.

Now that the Tangle Wire was coming untangled and Tomi found a little room to maneuver. A Pattern of Rebirth enchanted the Finn's Bird before he swung his Ghoul into Call of the Herd. Diego had to block and when Tomi saved his Ghoul by sacrificing the Bird and putting a Symbiotic Wurm into play it was apparent why.

Deranged Hermit died to the Engineered Plague ASAP but made four little chump blockers. That was not enough as Tomi also had the Recurring Nightmare and was able to make infinite 1/1's with the enchantment and his Symbiotic Wurm. Diego tried to play a Rofellos but when he remembered that it would just die to the Plague he extended his hand.