Round 3: Down the Drain 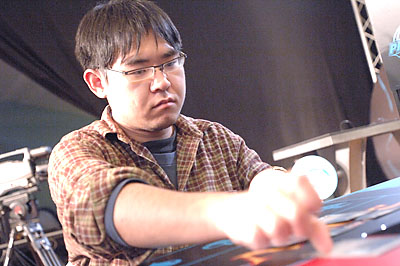 Makihito Mihara packs a blue-white deck, widely considered one of the best decks before Planar Chaos…

Coimbra got to play first for the match opener and took complete control right from the start. Using every single mana turn after turn, he led with Mindstab (suspended), Rathi Trapper, Urborg Syphon-Mage, Brain Gorgers. From here Coimbra switched to madness mode, firing off Syphon-Mage shots off with Psychotic Episode, another Brain Gorgers, and finally a Nightshade Assassin with no black cards left in hand. Meanwhile Mihara did what he could, suspending an Ephemeron and getting out a morph and Mangara of Corondor before the Mindstab wiped out a hand of Island, D'Avenent Archer, and Wipe Away. That left him with Stuffy Doll in hand after the Mindstab but short one mana to cast it, which meant the Psychotic Episode nailed the doll before it could ever enter play. On his heels the whole time, Mihara couldn't keep up, and his remaining creatures began perishing to kill spells turn after turn as he quickly crumpled under the Onslaught. Three Syphon-Mage drains fired over the next three turns to end the quick, brutal game.

Looking for revenge, Mihara was disheartened by a mulligan but looked much more interested once Coimbra mulliganned his hand down to five cards. This time it was all Mihara, leading with Deepwalker (suspended), Looter il-Kor, Serendib Sorcerer, and Icatian Crier. Not helped by the mulligan any, Coimbra got stuck at three mana, having only summoned a Rathi Trapper. Falling further behind once the Deepwalker was in play, Coimbra finally found another creature in Trespasser il-Vec, but it fell to a Sunlance, joined in the dumper by the Trapper, which died to another Sunlance. Finally finding land #4, Coimbra went for a desperation Tendrils of Corruption to start clearing the board and gain some badly needed life. Unfortunately for him, the final card in Mihara's hand turned out to be a devastating Mana Tithe. 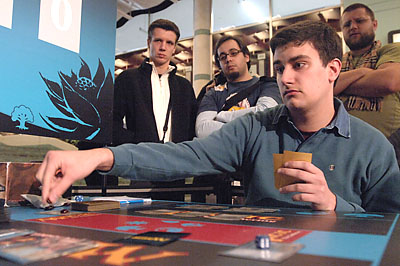 …while André Coimbra hits hard with an unusual (and powerful) mono-black deck.

This time it was Coimbra on the play and Mihara with a mulligan. Coimbra had a smooth start with Rathi Trapper, Trespasser, Syphon-Mage, and a Tendrils of Corruption on a morph that turned out to be an Aquamorph Entity. Falling behind and having only a Looter in play, Mihara managed to get his Stuff Doll out, only to lose it to a very painful Enslave. Mihara asked another question in Castle Raptors, but Coimbra again had a big answer, this time in the form of a huge Tendrils for 7. An Ivory Giant came into play from suspend-land but got tapped down by the Trapper when it arrived, while the Syphon-Mage continued its grim business. A turn later it was Coimbra 31, Mihara 6 before the Ivory Giant came over for a feeble-looking 3. As if things weren't bad enough, Coimbra added a Triskelavus to the board, drawing a chuckle from both Mihara and the audience. Drawing one last card and dead on the table, Mihara was out of options and conceded as soon as the Triskelavus started firing next turn.