Round 3: Eugene Harvey vs. Chris Benafel 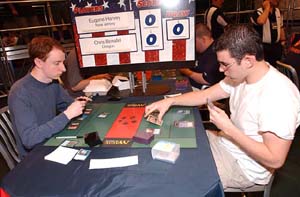 United States Nationals is not unfamiliar ground for either of these players- both have made their mark in Orlando. Benafel came in the finals two years ago, losing to eventual National and World Champion Jon Finkel in a now famous 3-0 rout. Last year, Harvey came to Orlando as a relatively unknown player, made his way into Nationals through a Grinder, and came in third to earn a spot on the United States National team. Many speculated that Harvey did not have the experience, or perhaps the skill necessary to help the United States win another World Championship, but the team managed another victory thanks in part to Harvey's stellar 6-0 draft day at Worlds. Just to prove it wasn't a fluke, Harvey also won Grand Prix Atlanta, solidifying himself as one of the best Limited players around. Today, he comes back to the springboard for his Magic career a year later, looking to earn a spot on the National team once again.

Harvey mulliganed his opening hand. Benafel summoned a first turn Llanowar Elves and missed his second land drop, but still brought out Wild Mongrel. Harvey missed his third land drop, and Benafel got some more resources with the help of Birds of Paradise. Harvey was still stuck at two lands but found a Merfolk Looter, but Benafel had Opposition to swing the game heavily in his favor. Squirrel Nest followed, Harvey tried to slow down the lock with Fire, but Benafel had Circular Logic. This was enough to convince Harvey to scoop. 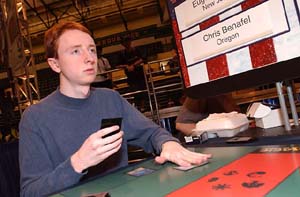 Once again, Harvey mulliganed. He brought out a first turn Birds of Paradise, and Benafel kept pace, doing the same. Harvey played a second turn Squirrel Nest, but Benafel had Aura Graft to steal it. Flametongue Kavu shot down Benafel's Birds, and Wild Mongrel joined Benafel's side, while he made good use of the stolen Nest. Still, he was stuck at only two mana sources. To make matters worse, Harvey cast a second Nest to keep pace with Benafel's. Harvey then cast Unnatural Selection, which is great tech in the mirror match since it can make two identical creatures Legends, destroying the desired copy. Benafel drew a third forest, and Harvey summoned Merfolk Looter to give him even more of an advantage. A second Looter made things look even worse. Benafel finally drew a non-forest land in Shivan Reef, and used Fire to kill off both Looters. Still, he was far behind on the board. Harvey gained card advantage with Deep Analysis, and used his own Aura Graft to take back his Squirrel Nest. Opposition followed, along with the game. 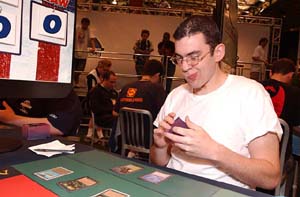 This time, it was Benafel who mulliganed. Harvey had a first turn Bird, and Benafel had a second turn Looter. Fire took out the Looter, and dealt one point of damage to Benafel. Wild Mongrel helped Benafel rebuild, but Harvey summoned Flametongue Kavu to take it down. Benafel cast his own Flametongue to kill Harvey's, but Harvey kept the chain going with yet another Flametongue to keep the advantage. Benafel cast Unnatural Selection, and used Fire to take down a Llanowar Elves and Merfolk Looter. Harvey's "FTK" was still swinging for four a turn, and Benafel needed to find an answer fast. Not helping matters was Jade Leech, which made a bad board position even worse for Benafel. Harvey also found his own Unnatural Selection. Another Flametongue was summoned by Benafel to take down Harvey's, but Harvey still had the advantage by simple math: 5/5 vs. 4/2. Harvey then brought out Opposition, but only had a Bird to work with, and the Leech which was attacking. Benafel now played his own Opposition, and things got a bit more interesting. Harvey had two creatures to Benafel's lone Kavu, but for some reason decided to tap a land instead of the Flametongue. Regardless, he had Fire to finish up the job and take the match.