Round 3: Faces in the Crowd

Even in the early rounds, before the thugs with three byes have to start scrapping like the rest of the players, a Grand Prix is a Who's Who of Magic talent. Seeing the games best and brightest playing on the same green tablecloth next to Joe Average can be a bit disconcerting, but it's the same game we're all playing, and most of it happens outside the limelight of the Feature Match area. Check out this miniature wildlife safari. 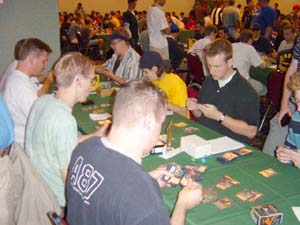 Don't mind the bludgeoning happening in the foreground of the picture. Cast your eyes back and you'll see none other than Bob Maher, Jr playing Chris Kelsey. Fresh off a Top 32 finish at Grand Prix - London, Maher hasn't had nearly enough gaming. The practice he's been putting in on Magic Online seems to be paying off. Also somewhere out there you'll find Robert Maher, Sr., following in his son's footsteps. 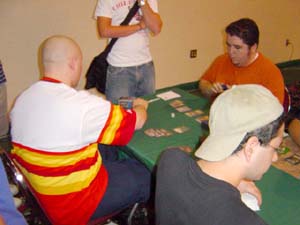 It's impossible to miss that chrome dome. It's Peter Szigeti, noted miscreant and now, baseball historian! Astute observers might recognize his jaunty jersey as vintage Houston Astros. Opposite him and having no fun whatsoever is Mike Willoughby. The Mirari in play may have something to do with that. 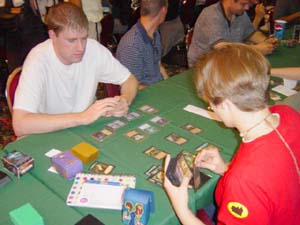 The very face of internet irreverance, Andrew Stokinger writes articles for a host of Magic Strategy sites. Hopefully he's managed to take his own advice. Here he squares off against former Babe of the Month Jill Costigan. It's the deadly blue-green mirror, but Costigan's Speculations seem to have given her the edge. 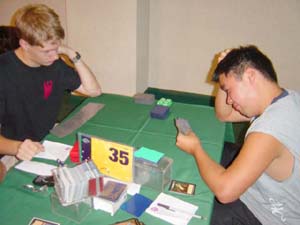 Before his nickname was shanghaied by Kai "Winningest Man Ever" Budde, Canada's Gab Tsang was the original Juggernaut. He's since reclaimed the title for Magic Online, and sits atop the Composite Rankings in the Hall of Champions. His fanaticism for drafting the booster has left him ill-equipped for this weekend, as evidenced by his agonizing over a mulligan. Opposite him is another familiar face, Paul "Little Darwin" Rietzl of Team Your Move Games. Rietzl is a bit of a prodigy, whose arrogance is only surpassed by his talent for the cards. 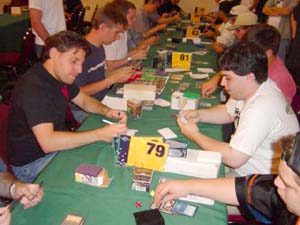 YMG are out in force this weekend. Here you see junior member and "Boy Wonder" Danny Mandel verifying his victory over Justin Polin. Polin's been keeping a low profile since his Top 4 at Grand Prix - Capetown and Top 32 at Pro Tour - San Diego. Mandel, too, is in the hunt for glory. Winning his first round has considerably lifted his spirits. 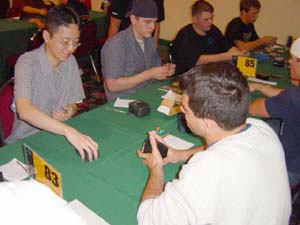 And what scavenger hunt would be complete without a Deadguy? Don't let that easygoing smile fool you, there's a reason they call Tony Tsai "The Shark". He may talk like he'll be wearing the reporter's shirt for Day 2, but he plays to win. Across from him is Sergio Martins, already lured into a false sense of security.