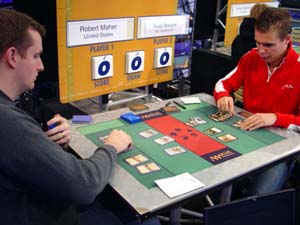 is Boeken's first Pro Tour since Yokohama, when he failed to place high enough to stay on the gravy train. The good news is that he won the last chance qualifier to get back on the Pro Tour in his own country, but the bad news is that the tournament ended early this morning, and he's only had about an hour of sleep. With the new format of eight rounds and three drafts, endurance is sure to become a factor. So far, that's proven to be the case as he's 0-2, and looking to salvage this draft with a win. He didn't even get an easy loser's bracket match either, as his opponent is Bob Maher.

Boeken had a first turn Bonesplitter, and Maher accelerated with Leaden Myr. All Boeken could do was draw and complain, as he didn't play anything on turn two or three. Maher played Goblin War Wagon, and Boeken summoned Clockwork Condor. The Wagon attacked for three, and Maher played a Soldier Replica to stop the Condor if need be. It attacked for three, and Boeken brought out Fangren Hunter. This was enough to put Maher on the defensive, where he'd be able to contain the 4/4. Bonesplitter went on the Condor to deal four damage, and Boeken played Ogre Leadfoot. Maher played a Sun Droplet, making Boeken's offense into an uphill battle. Dragon Blood helped a bit, making the Leadfoot 4/4 against Maher's all artifact team. Thanks to Irritate, however, it went right to the graveyard, and the Condor got through for three more damage before dying off. Maher was content to continue to build a wall of defense, as he couldn't get past the Hunter. Boeken summoned Goblin Replica, and on the following turn found the game breaker he had been looking for in Spikeshot Goblin. Bonesplitter made it into a bolt machine, and it took down a Leonin Den-Guard. A Leonin Scimitar made Soldier Replica 2/4, but with Dragon Blood making the Spikeshot even bigger, Maher was in serious trouble. Razor Barrier protected the Replica for a turn, but that was the only resistance he could offer as his creatures died one by one. A second Spikeshot got a nod of acceptance from Maher, followed by concession.

Boeken mulliganed down to four, and Maher came right out with Leonin Scimitar and Banshee's Blade.

"Now you get to see what I'm going to put them on."- Maher, right before playing Nuisance Engine.

Boeken played Goblin Replica, Maher made a token, and put Banshee's Blade on it. Rather than killing an artifact, Boeken played Vulshok Berserker and attacked, and Maher chump blocked with his Nuisance token. Irridate killed the Berserker, and Boeken played a better threat in Spikeshot Goblin. Maher cast Titanium Golem, joking, "It's a (Sea) Snidd. I basically triple mulliganed too." Boeken attacked with the Replica and it was blocked by the Golem, so he destroyed it with the special ability. Maher untapped and played Clockwork Dragon, as Neil Reeves taunted from the stands and Boeken jokingly moved Goblin Replica back into play from the graveyard. The Dragon attacked for six, and Maher summoned Luminous Angel.

Boeken- "Your deck is so bad!" 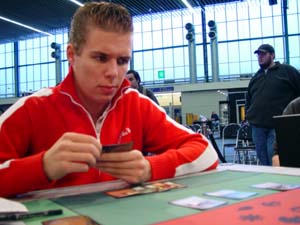 Boeken played Vulshok Gauntlets, and Maher had a Den-Guard, followed by Banshee's Blade and Auriok Transfixer. Boeken summoned Tel-Jilad Exile, which blocked the Den-Guard after it was equipped with the Blade. The 2/3 regenerator put on the Gauntlets, and Boeken summoned Slith Predator. This was enough to hold back the Den-Guard, so Maher just played a Nim Shrieker and ended his turn. Boeken summoned a Fangren Hunter and quickly sighed. "I suck." He had forgotten to attack with the Exile first, to make sure he had mana available for regeneration. It didn't matter, as Maher just chump blocked with the Transfixer. The Den-Guard and Shrieker attacked, and Maher summoned Titanium Golem. The Gauntlets went on the Hunter, and it attacked for eight damage. This left Boeken with just a 1/1 Slith on defense. It died to Consume Spirit, and Maher attacked for nine to bring Boeken down to six life. On end step, Boeken used Shrapnel Blast to deal five damage to Maher, and get the Gauntlets off the Hunter so it could untap. The Hunter and Exile attacked, and the Den-Guard blocked the Hunter- Predator's Strike made it big enough to win the fight. The Blade went on the Shrieker to give it +4/+4, and that was enough to finish it.