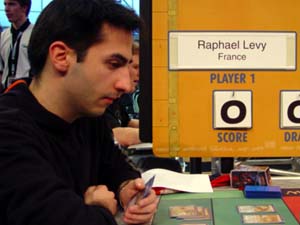 fast, what was the last Limited Pro Tour to feature an American player in the finals?

You have to go back to Alan Comer's performance at PT Barcleona and before that Mike Pustilnik in Los Angeles. The performance of players outside of the United States has seen a steady increase over the intervening years with a steady stream of European, Japanese, and Latin American players elbowing their way into the narrow beam of the Sunday spotlight.

Only one of the two players featured this round will have an chance to bask in that spotlight this weekend. When discussing their decks earlier today both players allowed for the possibility of a 1-2 start but with the possibility of an 0-3 both of the seemed to be in a state of disbelief.

France's Rafael Levy seemed particularly stunned, "I'll give all the details after the match. I am pretty down about the whole thing." Rafael had suffered losses to Dave Williams and his Molder Slug and to Stefano Gattolin's Loxodon Warhammer and Glissa. He turned to Amsterdam's own Jelger Wiegersma, "Did you lose to the Japanese guy?"

"One of them-the one with the Broodstar."

Both players kept their initial hands and their first round of elimination play was underway. Rafael came out fast with a Bonesplitter and Talisman on the first two turns. He was missing his third land and played a Cathodion. Jelger came back with a Wizard Replica.

Rafael's land came back online and he was able to play a Myr Enforcer after sending his Cathodion in for three points. Jelger played a Seat of the Synod and cast Lodestone Myr and a free Frogmite. Rafael's hand was quite juicy with Domineer, Icy Manipulator, and Betrayal of Flesh but your hand tends to look good when you have no lands. He had no attacks and played the Icy but would have to wait a turn for available mana in order to use it.

Jelger was content to peck for a point with his Wizard Replica and reinforced with a Cobalt Golem. Levy tried to bait Jelger into popping his Replica with a Nim Shrieker but the Dutchman did not bite. He also had a land and was able to tap down the Lodestone Myr on Jelger's turn. The Dutchman played a Spikeshot Goblin and a Neurok Spy and sent the turn back to an increqsingly nervous Levy.

Levy moved his Bonesplitter onto his Enforcer and sent it into battle where it traded with a Cobalt Golem and a Frogmite. His Nim Shrieker flew in unmolested and Jelger fell to twelve. Levy played a Slith Bloodletter and passed the turn able to keep the Lodestone Myr tapped and Jelger passed the turn without incident.
Levy sent his Nim Shrieker and the Cathodion across and Jelger seemed wary of the Betrayal of Flesh and pondered his blocks. Finally, he put the Wizard replica and the Spy in the path of the 3/3. The Shrieker fell to the Spikeshot and when damage resolved the Wizard Replica was dead and Levy used the Cathodion mana to cast Betrayal of the Flesh on the Spikeshot and regrow his Myr Enforcer. He moved his Splitter onto the Bloddletter and passed the turn. He was tight on mana again and could either tap something on Jelger's turn or block and regenerate with the Slith but not both. Jelger activated a Stalking Stones during the end of Levy's turn.

Jelger announced his attack step and asked, "Tap something or not?" The Lodestone Myr was tapped and the Neurok Spy took Levy to seventeen.Jelger then tapped out to play a Goblin War Wagon and Vulshok Battlegear. When a splittered Enforcer attacked the Wagon jumped in the way.

With the Battlegear in play Jelger could dictate which creature Levy tapped and put his equipment on the Spy and he was able to swing with the Lodestone Myr. Levy "prevented" a point of damage by blocking with his Bloodletter and regenerating. Jelger reinforced with a Krark-Clan Grunt, which seemed promted Levy to mutter in French and English.

Levy looked the board over and went over how he could survive. He considered some attacks but reappraised the board and saw that he was staring down close to sixteen points of potential damage. "Whew, I am so smart-I almost lost. I am going to let you go."

Levy tapped the Neurok Spy and now Jelger had to think about his attack step. He finally decided to send in the Myr and he took down the Myr Enforcer that doubleblocked alongside the Slith. He was able to make it a 6/6 and even got in a point of trample. He left the Lodestone lying in the red zone as he moved to his second main phase. Levy seemed alarmed, "This guy is dead, right?"

More than half of the round had expired by now and one of Jelger's friends wondered if there had been a deck check to slow down the proceedings, "Deck check? No, Levy is just kind of slow..."

Levy was indignant and quickly played an Alpha Myr and equipped it. Jelger thought about what to do with his own equipment on his next turn and Levy teased him, "I am slow? Blah, blah!" Jelger equpped his Stalking Stones and they were promptly tapped. Levy did not block an attcking Grunt and Spy and fell to eight.

Levy swung in with his two creatures and Jelger fell to seven. He followed it up with a 4/1 Nim Shrieker. Jelger played a Neurok Familiar and revealed a Myr Enforcer. Levy's eyes nearly popped out of his head and the French muttering resumed.

The top of Levy's deck rewarded him with an artifact and he was able to kill the Dutch player by equipping his Shrieker up to a 7/1 and tapping the only flying blocker. It was Jelger's turn to mutter, "I played that wrong."

Rather than bolster Levy's confidence, the win just seemed to highten his anxiety. "I have won every single Game 1 so far..."

Jelger's confidence was in the gutter, "I haven't won a game yet."

Jelger kept his opening hand while Raphael sent his packing in favor of a six card hand he felth he had to keep. It had two Slith Bloodletters and a Barter in Blood but only one Swamp and one Island.

Jelger came out with a turn three Wizard Replica while Levy floundered on three lands-he drew a Seat of the Synod but no second Swamp. The Replica was soon wielding Vulshok Battlegear and Levy scooped in frustration when Jelger played a Rust Elemental with multiple artifact lands in play.

Both players hurried to get the third game underway-a draw would eliminate both of them. Levy came out of the gate with an Alpha Myr and a Nim Replica. Jelger stemmed the beats with a Wizard Replica. The Nim got in for three more while the Myr stayed on the sidelines. Levy reinforced with a Shrieker.

Jelger played a Cobalth Golem and passed the turn. The pace of play was much more urgent and both players were intensley focused on their slim chances of continuing on in the event.

Levy sent the Shrieker and the Replica into battle and they traded with Jelger's team. Levy played and cycled a spellbomb to find a threat. Jelger played a Lumengrid Sentinel and a Frogmite.

The Alpha Myr took Jelger down to thirteen. Jelger laid a Stalking Stones and attacked Levy to seventeen with the Frogmite and Sentinel which was killed with Betrayal of Flesh EOT regrowing the Shrieker to boot.

Levy untapped and plopped freshly drawn Bopnesplitter into play, "How lucky!" He sent the Shrieker in and Jelger fell to six. The Dutch player animated his Stones EOT and was able to play a Rust Elemental and a Myr Enforcer after dropping Levy to twelve. Levy's jaw was on the table, "I am lucky?"

Jelger assured him, "You are." 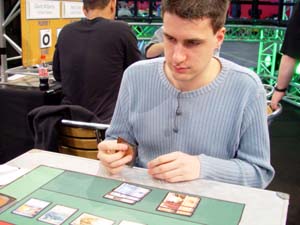 Rafael was desolate when it was not anything of use. He scowled at his cards and was facing elimination from Day 2 contention, "I cannot believe it. This is the same as the others."

He held on for another turn by bluffing an Electrostatic Bolt but when the top of his deck yielded Talismans on back to back turns his front collapsed and he assured Jelger that his hand contained nothing of use, "Kill me, I have nothing!"