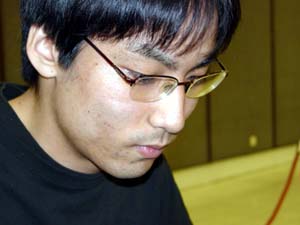 over half the players in this Grand Prix coming to the event from outside Hong Kong's borders it was a United Nations of Magic players at the convention center. While there were players from as far off as Europe and the United States the majority of the players came from Asian countries.

Akira Asahara was one of twenty-four Japanese players in attendance. Long considered one of his country's most inventive and respected constructed deck builders, Asahara found himself with only two byes for this event. His deck was a red-black powerhouse with abundant removal for the creature race and a Pentavus to cross the finish line.

Chen Yen-Hao came here from Taiwan. He was one of fourteen of his countrymen to do so. He found himself with two byes coming into this event based on his high Limited rating. His deck was white-green and touched red for Shatter, Pyrite Spellbomb, and Dismantle.

Chen opened with a Chromatic Sphere and a turn two Auriok Transfixer but the Taiwanese player missed his third land drop. He still managed to play a Leonin Den-Guard. Asahara's third turn brought out a Dross Golem. The Golem had to sit and watch as the Den Guard picked up a Bola and came in for two points without tapping. Chen was still on two lands.

Asahara played a Krosan Beserker and announced his attack step. Chen chose to do nothing and the Dross Golem menaced its way across the red zone for two points. Chen attacked again with his Den-Guard but was still hurting for lands. He tapped the Golem with his Transfixer and Asahara was not willing to send the Berserker into the 2/4 soldier. With five lands in play the Japanese player put out a Goblin War Wagon, which was tapped EOT by Chen.

He reequipped the Den-Guard and took another tenth of Asahara's life total. He also found his third land…a Glimmervoid. Asahara Dismantled the Bola and Chen tapped the Berserker--the Japanese player had left his War Wagon tapped. Asahara played an Arcbound Hybrid which got in for two when Chen tapped the Dross Golem with the Transfixer.

Chen had Myr Retriever and passed the turn with out any other play. He was still hurting for land and had a swollen grip of cards. Asahara was down to only two cards in hand. The War Wagon was untapped and then tapped again when Asahara announced an attack. The Den Guard and Retriever stood in the way of the Arcbound Hybrid and Chen took six while the Retriever died and the Bola was fetched. Asahara put his counters on the Golem.

Finally, Chen drew a Forest--he had only two Plains and the Glimmervoid to this point. The Bola went back on the Den-Guard and Akira fell to eleven. Pyrite Spellbomb hit the table post attack. Akira untapped his War Wagon and mulled over his turn. He announced his attack and the Transfixer tapped the Golem. The War Wagon got in for three but the Berserker died in conflict with the Den-Guard.

Chen played a fifth land and got in for another two pints. The score was nine to six in Asahara's favor. Asahara left all of his mana open and chose not to untap the War Wagon--nothing good could come of that for Chen. Dross Golem was tapped before combat but it did not matter. Asahara funneled a mana through his Chromatic Sphere that he played the turn previous and was able to Consume Spirit for exactly six points of damage.

Chen led off with a Pyrite Spellbomb and had the Bola on turn two. He had the Den-Guard online and equipped on turn three. Asahara stunted him a turn with a Chittering Rats and Chen cycled the Sepllbomb to keep pace. He attacked for two and played a Myr Retriever on his next turn. Asahara, who had considered mulliganing was stuck on three lands.

Chen was also stuck on three but his Den-Guard kept coming. Asahara found land umber four one only turn late and played a Juggernaut. The mana-tight Chen chose not to tap it at the end of Asahara's turn. He had no land and no play on his next turn though and passed it back to the Japanese player with a frown.

He allowed Asahara to attack with the Juggernaut and put his Retriever in the way. Echoing Courage meant they would trade but Chen got back a Pyrite Spellbomb in the exchange. Asahara played a Sun Droplet.

Chen's fourth land fueled an Arcbound Crusher but Asahara had a Barter in Blood. Chen cycled his spell bomb on the next turn but found nothing. Asahara had an two-mana Oxidda Golem and a Goblin War Wagon. Chen played Skeleton Shard and Vulshok Gauntlets on his turn and fell to eleven on Asahara's next attack. The Japanese player confidently taped seven mana and plopped down his deck's big gun--Pentavus. 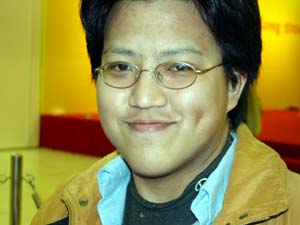 Chen hoped for an answer off the top with his opponent tapped out. He played a Chromatic Sphere and popped it for red hoping to draw the Shatter or Dismantle. He had to use the mana to regrow his My Retriever and played the 1/ 1 and hoped for the best next turn. Asahara sent in everyone and the 1/1 jumped in the way of the Pentavus. He fell to five and picked up the Chromatic Sphere.

He rinsed and repeated his Hail Mary play from the previous turn but in the end he extended his hand.

1 Pentavus 1 Pulse of the Forge
40 Cards