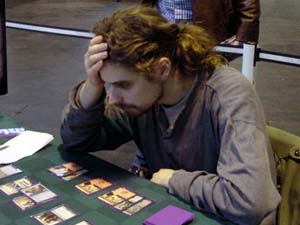 Ronaldson won the die roll and thought for a bit before deciding to draw. Meaney was forced to mulligan and started with a Arcbound Stinger and Gold Myr before petering out. Ronaldson opened with a Tanglewalker and then a glitch in his mana where he had to cast a Talisman delayed Glissa arriving for a turn. The elf bomb didn't hang around for long as a Terror sent her packing.

Meaney bemoaned his lack of creatures while Ronaldson dropped a Goblin War Wagon. His stunted mana development meant the Wagon had to stay at home while he brought out a Gold Myr.

Meaney meanwhile started to get going as an end-of-turn Needlebug nudged him ahead in the race and then Solemn Simulacrum fetched the third colour, a mountain, for the Irish champion. Ronaldson put the brakes on when Tel-Jihad Archers appeared to block Meaney's path.

Ronaldson disagreed as a huge Goblin Dirible appeared on his side of the board.

Then the game turned on it's head as Meaney took out the Archers with an end-of-turn Murderous Spoils, blew up the big goblin balloon and then piled on further insult with a Loxodon Warhammer.

Ronaldson had a Rustspore Ram to deal with the Elephant Hammer and an equipment of his own to provide an answer to the irritating Needlebug: Leonin Bolas. Meaney continued to nibble through the skies with the Stinger.

Juggernaut for Meaney and Pulse of the Tangle from Ronaldson added to a crowded board. The board got little clearer as Meaney sent in his team. Once the dust settled Meaney had just sneaked through enough damage to finish Ronaldson with Essence Drain.

"Build your deck wrong?" Ronaldson asked as Meaney made some agricultural changes to the deck.

This time the Englishman elected to go first. Meaney led off with a Auriok Transfixer, followed by a Gold Myr while Ronaldson could only make a Skeleton Shard.

Meaney summoned a Vedalken Engineer to ramp up his mana but could only manage to bust out another Myr and a Frogmite with it on the following turn while Ronaldson stopped his attacking options dead with a Tel-Jihad Chosen.

Glissa appeared and this time showed a little more courage. Meaney had no answer and was forced to watch his Frogmites and Myrs get eaten while Ronaldson sunk his mana into the Exile.

With artifacts denied to him Meaney took the skies and started racing with a Lumengrid Sentinel and Neurok Prodigy. Ronaldson's only offence was a Tanglewalker joining the fray. The Goblin Dirible that followed was an annoyance but easily dealt with by the Transfixer.

Ronaldson hit him once and chose not to untap the Dirigible. Sure enough Meaney walked straight into the Tangle Spider. An all-out attack from Ronaldson levelled the scores at one a-piece.

"Still can't decide about this deck," Meaney said, but chose to stick with the white rather than reverting to the red.

The first couple of turns happened uneventfully until turn three when Meaney summoned a Lumengrid Sentinel and Ronaldson replied with a Tanglewalker. It got very bad very quickly for the Englishman as Meaney followed with a Juggernaut. Ronaldson had a War Wagon to block but Meaney cast two artifacts and tapped Ronaldson's blockers with the Sentinel to send the Juggernaut crashing through.

Altar's Light on Ronaldson's Arcbound Bruiser left the way through for another battering. Ronaldson traded the Tanglewalker for a Frogmite and rallied a little when an Essence Drain took out the Juggernaut. 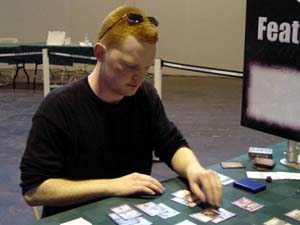 War Wagon untapped and was joined by a Tel-Jihad Exile. Meaney seemed to have all the answers. Another artifact, Copper Myr, entered play to tap the Wagon and a Terror cleared out the Exile for another blitz.

Ronaldson's Grab the Reins was forced to take out such humble targets as a Vedalken Engineer and Yotian Soldier just to stay alive.

Meaney seemed to have an unlimited supply of gas as he ripped the Warhammer to end the game in one final hit.