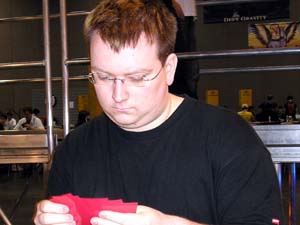 Thoren's reign as the Invitational Champion will come to a close when Bob Maher and Mattias Jorstedt fight it out for the honor of designing the next invitational card on Sunday. They will have their work cut out for them to top Jens's card from last year--Solemn Simulacrum. Jens ended in the middle of a clump of players with 9-6 records that were tied for third but he fell one win short of having a chance to be the fist player to go back to back--or even win two for that matter--in the Invitational.

Dave Humpherys has been having a quiet year since his annual Top 8 finish at Worlds other than his second place finish at Grand Prix Oakland. Humpherys has joked that if it were not for the World Championships he would have fallen off the Pro Tour a long time ago but the YMG old schooler is always a threat to win and the format this weekend was the same as Oakland's Day Two draft. Both players were 2-0 and looking to sweep the table.

Neither player mulliganed their openers. Dave played a Gold Myr and frowned when Jens put out the troublesome Slith Bloodletter--Jens had opened on Aether Spellbomb. He was hoping Jens would not have a blue source as he made a Hematite Golem. Jens played a Seat of the Synod and grew his Bloodletter to a 2/2--he also made a Gold Myr.

Dave replayed the Golem and sat back on it and his Myr. Jens could not mount an attack but was able to summon a Somber Hoverguard despite only three lands. He had no block when Dave sent in the Hematite Golem and Dave pumped it twice dropping the Swedish player to fifteen. Dave passed the turn with a Mountain and Gold Myr open. When Jens attacked on the next turn he used the available mana to Purge the Slith and fell to fifteen from the Hoverguard. Jens was stuck on three lands and glumly played a Grimclaw Bats.

Dave ate another fourth of Jens' starting life total and added an Auriok Bladewarden to the board but Jens took it out with Echoing Decay. Jens chose not to attack on his next turn and Dave chose to send his Golem into Jens' meager army. He put his two fliers in the way and Dave pumped the Golem twice and then a third time to be sure. He dealt seven damage to the two fliers putting three on the Hoverguard and four on the Bats. He waited for some trick from the Swede but he merely put his two men in the bin. He was holding Scale of Chiss-Goria but Dave assigned damage such that he could not save either. He played the Scale EOT and untapped to play a Cobalt Golem.

Dave frowned and cast Darksteel Pendant with eight lands and a Gold Myr in play. "That is a lot of lands," commented Jens who got in for two and played a Quicksilver Behemoth. Dave dug with his Pendant and found a Pyrite Spellbomb which he used to kill the Gold Myr. He then sent his Gold Myr into Jens' Behemoth and the Swede took one.

Jens played a precombat Somber Hoverguard and sent in his two men dropping the American to eight. Dave pendanted to find an Arrest and cast it on the Hovergaurd but fell to six from the Cobalt Golem. Jens played his fourth land and Moriok Scavenger retrieving his Myr. Dave continued to "dig" with his Pendant and found a Loxodon Mystic. Jens sent in the team and Dave put the Mystic and a Myr in the way of the Cobalt Golem. Jens stacked damage and cast a heartbreaking Wail of the Nim with entwine. Dave fell to three and lost both of his men.

He used his Pendant on upkeep and didn't like what he saw. His next card was another land and they moved on to the next game.

Dave sided out a Hematite Golem and an Unforge to bring in Nemesis Mask and Tooth of Chiss-Goria. Dave kept his opening hand and led off with Pyrite Spellbomb and followed with Alpha Myr. Jens had two Swamps and no play to this point. Dave's Darksteel Pendant allowed him to play a free Tooth of Chiss-Goria on the third turn and he got in for three. Jens' third turn Chittering Rats made Dave's Pendant less relevant for the time being.

He redrew the Shrapnel Blast he had put down and then Pendanted to see that his missing Mountain was sitting on top of the deck. He sent in his Myr and it traded with the Rats. Jens had his fourth Swamp but no play on his turn. Dave's next turn was equally unexciting with only a Mountain, After Jens played a five-mana Somber Hoverguard Dave used the Spellbomb to kill the flier. He untapped and played a Leonin Den-Guard.

Jens removed the Alpha Myr from Dave's bin to imprint it on Mirror Golem but Dave dug into his deck to find Arrest and he got in for two with the Den-Guard. Jens played another Rat and Hovergaurd on his next turn and Dave found himself being backed into a corner despite not having taken any damage yet in the game.

Dave sent in the Den-Guard and got in two more points of damage. He shrugged and played a Pteron Ghost. Jens sent only his Rats into battle and Dave fell to eighteen. He pushed the Rats card to the bottom of his deck and used the Pendant again on upkeep liking the Vulshok Gauntlets he saw there even though he did not have the mana to make use of it that turn. He played the equipment and passed with no attack. 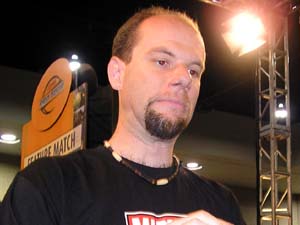 Jens had a Bonesplitter for his Rats and Dave put the Pteron Ghost in the way. He tried to kill it with his Tooth but Jens was ready with its foil the Scale. Dave made a 6/6 soldier on his turn with the Gauntlets and sent it into the red zone. When he pumped the Den-Guard to a 7/6 Jens slammed a Murderous Spoils down. He went to take the Gauntlets but Dave slowed him down and killed the Hoverguard with a Shrapnel Blast.

Jens was not out of gas though. He played a Neurok Spy and got in for four with his Rats. Dave groaned as the top of his deck yielded Nemesis Mask with no creature in sight. The Swede dropped him to eight and added a Gold Myr to the board. Dave had no play on his turn but when Jens attacked with everyone he Raised the Alarm to kill the Rats. He looked suicidal when Jens played a freshly drawn Pewter Golem. He hoped for an answer with Pendant but once again it only found him land and Jens went into the next draft with a 3-0 record.