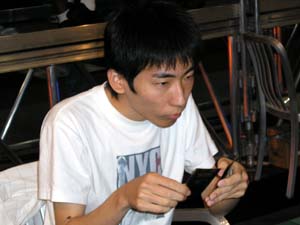 just a short period of time Masashi Ooiso has burst upon the competitive Magic scene, playing his way to two Pro Tour Top 8's. As last season's Rookie of the Year, he received a title to go along with his accomplishments, but don't let that fool you into thinking Ooiso is "potential". He's the real deal, and is sure to be a force on the Pro Tour for years to come. His opponent this round, Ben Rubin, is probably the youngest veteran in the game. Placing in two Pro Tour finals as a young teenager, he went on to win two Masters events. He seems to be less enthusiastic about Magic these days, but still manages to do well, particularly in Grand Prix events. He hasn't been on the Sunday stage of a Pro Tour in a while however, and is looking to return this weekend.

Rubin played a first turn Pyrite Spellbomb, and a second turn Vedalken Engineer. Ooiso summoned Arcbound Stinger, and Rubin used his Engineer to bring out Silver Myr and Neurok Spy on turn three. The Stinger attacked for a point of damage, and Arrest stopped the Spy. The Engineer and Myr attacked for two, and Rubin played a Stinger of his own. Osio summoned Drill-Skimmer, and Rubin played Arcane Spyglass. Ooiso's Tel-Jilad Wolf died to Pyrite Spellbomb right away, and Rubin played Lumengrid Augur. Deconstruct destroyed the Spyglass before it got to three counters, and the remaining mana was used to cast One-Dozen Eyes, giving Ooiso a 5/5 creature. Rubin brought out Hematite Golem, and it was chump blocked by the Stinger, which put a counter on Drill-Skimmer. Rubin made his side of the board look even better thanks to Somber Hoverguard, and Ooiso attacked with his 5/5 token, which was chump blocked by the Stinger. This made Rubin's Hematite Golem a bit bigger, and Ooiso played Tel-Jilad Wolf. This gave him an answer to the threat, but Rubin had plenty of resources to spare. He sent the Hoverguard, Augur and Golem into the Red Zone- the Wolf blocked the Augur, and the Skimmer blocked the Hoverguard. All went to the graveyard, and the Golem was pumped to do some more damage. Ooiso played a Fangren Hunter, giving him a 4/4 to go along with his 5/5, but nothing else and no cards in hand. Still, he was only at fourteen, and seemed to have the board stabilized.

The Golem attacked and traded with the 5/5, and Ooiso attacked for four with his Hunter. On end step, Rubin cast Pulse of the Forge and got it back. Ooiso winced, and Rubin attacked with his Frogmite and Myr to bring him down to seven. Ooiso played Tel-Jilad Chosen, and Rubin mana burned. Ooiso played Tangle Golem, and Rubin had Arcbound Crusher. With the proper team now in place, Ooiso attacked with everyone and used Predator's Strike to force through lethal damage. 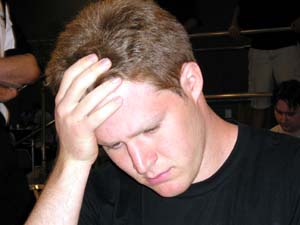 Ooiso opened with Leonin Scimitar, and played a third turn Darksteel Ingot, which was Annuled. Rubin played Hematite Golem, and Ooiso played Tangle Golem for three mana, giving him enough left over to hand it the Scimitar. Rubin played an Arcbound Stinger, which chump blocked the Golem. Ooiso improved his side with Tel-Jilad Chosen, and Rubin played Vedalken Archmage. Deconstruct destroyed the Golem, and Ooiso played a second Tangle Golem. All Rubin could muster to stay in the game was a Hoverguard, and Ooiso once again had Predator's Strike to finish it.

1 Pulse of the Forge