two players know each other very well. They are both French, and have played a lot of Pro Tours and Grand Prix together. 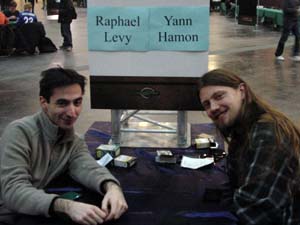 Magic: Bringing the world closer together at 10 a.m. on a Saturday

The game started as it often does in this format: Forest-go, Forest-go. Levy then used a Dimir Signet to play a turn three Moroii and a turn four Mortipede, showing all kinds of lands except Mountains. Hamon was forced to take a few hits, but could trade the insect for one of his own. However, his black-green-white deck couldn't provide an answer to the vampire in time, and he had to concede in turn seven.

Yann chose to play in Game 2, and again the players opened with a Forest on each side. They spent a few turns building their armies. Hamon's Vitu-Ghazi, the City-Tree made this a little easier for him, but he had to limit its use, as his Golgari Guildmage was very hungry for mana. Levy got a little damage in with the only flyer on the table, Snapping Drake, while Hamon used the Guildmage to force a Shambling Shell through once in a while. Levy proved to be quite a token-master himself, as Fists of Ironwood on Bramble Elemental provided a burst of saprolings - much need chump blockers on the ground. When he got his Cerulean Sphinx into play, the game quickly ended.