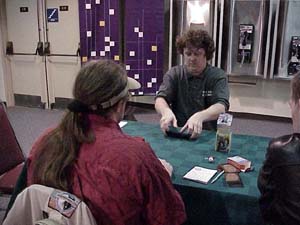 Eric Taylor was defending his home town at Grand Prix Detroit. Taylor and his ponytail have been around the Pro Tour forever, but he's having his best season this year. Fresh off a Top 32 finish in Tokyo where he played the same colors he's running at this Grand Prix - red, black, and blue - he took on 4-time PT Top 8 competitor Alan Comer (running red/green with a touch of black) in round 3. Average age in this feature match? Thirty-six!

Comer's start looked pretty fast when Nomadic Elf was followed by Horned Kavu, but "edt" was even faster: turn 4 Phyrexian Scuta and "kick it." Comer lined both his creatures up to double block the Scuta, knowing he might get wrecked but not feeling like he had much choice in the matter. Taylor had Urza's Rage ready to remove the Nomadic Elf before damage dealing and then the Horned Kavu died too without taking down the Scuta. Double-blocking has always been one of the most dangerous things you can do in Magic. Taylor got in one lick with the Scuta before Comer could drop his bomb: Shivan Wurm. Taylor tapped 6 mana and Comer commented "6 is an unhappy number," but it was just Goham Djinn that came out of edt's hand - not Agonizing Demise with kicker. Instead, it was a different kicked card that spelled Comer's doom. After Comer served with his 7/7 Wurm and dropped a Stone Kavu, Taylor played Rushing River to bounce both Comer's creatures off the table. Goham Djinn, Nightscape Familiar, Volcano Imp, and the Scuta added up to 10 points of damage and dropped Comer to 2. Comer drew his next card and scooped. 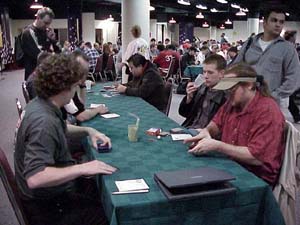 Comer used Harrow on turn 3 to set up his mana for the rest of game 2 and followed it up with a 4/3 Mire Kavu. A kicked Canopy Surge removed Taylor's first creature - Volcano Imp - and then Taylor's next three creatures were Scorched, Assaulted, and then Magma Bursted. Game to Comer is less than five minutes!

It was edt's turn to have a fist full of removal in game 3. After Comer's Scorching Lava removed his Kavu Aggressor, edt had malice for Comer's Kavu Runner. Taylor took 3 from a Mire Kavu and then when Comer tried for Horned Kavu, Taylor responded by targeting the 3/2 Mire Kavu (no Swamp this time) with Scorching Lava. Comer answered with Explosive Growth and Taylor then thought for a bit and decided he should use Magma Burst to kill the Mire Kavu, forcing Horned Kavu to return itself to Comer's hand. Comer had still more creatures though - Viashino Grappler allowed Horned Kavu to come into play yet again and Taylor was then forced to Terminate the Horned one. Comer didn't miss a beat, dropping Stone Kavu and replaying the Grappler. 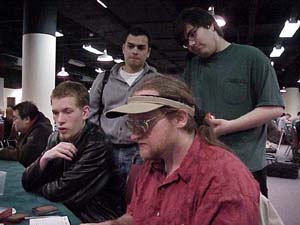 Taylor didn't miss a beat either as the removal continued to pour out of his deck. Tribal Flames dispatched the Stone Kavu and Hunting Drake hunted the Grappler. Taylor's problem, though, was that he just wasn't dealing any damage. Comer removed Taylor's second creature of the game - that turn 7 Hunting Drake - with a Canopy Surge and the random damage that Comer was able to do with his creatures before they died was really adding up. With Taylor down to 2, a point of trample damage from a Viashino Grappler (that was trading with Kavu Recluse) and another point of trample damage via the green ability on Keldon Mantle gave Comer the game win and the match.