Corney and Russell squared off in round 3 to see who would be sitting at the 3-0 table and make the perfect start to Nationals. Corney had drafted a control orientated U/W deck that was splashing Red for one of the best cards in the set, Flametongue Kavu. Russell on the other hand was playing a R/B deck that he admitted had a few less than optimal cards, but he couldn't really complain as it had got him this far.

Beginning the game with a mulligan, Corney felt a little better when Russell opened the game on the first turn with a Mountain and Scarred Puma. Russell announced that he had just cast number 23, explaining that it had been the last card he placed in his deck and Corney agreed that it was a horrible card. It seemed a little less horrible when Corney had to bounce a turn 2 Nightscape Familiar with Angelic Shield to stop the two from beating him down. Russell then recast his Familiar, to which Corney replied with an unkicked Prison Barricade. Russell's Rogue Kavu was then removed by Flametongue Kavu. When Corney tapped out to play an Angel of Mercy the next turn, the two monsters made friends with the graveyard when they were the target of a Magma Burst with Kicker. Russell then untapped, Terminated the Barricade and began his Puma-Familiar assault. Putting more pressure on Corney by casting an Ancient Kavu, Corney was forced to Distorting Wake all the creatures to try and buy some more time. After holding out for 2 more turns and drawing nothing but land Corney conceded game 1 to the Puma. 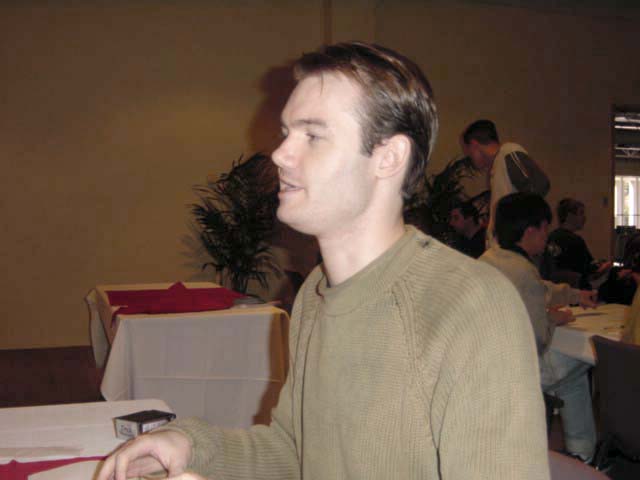 As the two shuffled their decks for game 2 Russell commented on how bad Corney was for splashing two mountains plus the Flametongue Kavu, but Corney retorted that he "refused to take deck advice from someone who was playing Scarred Puma".

Determined not to lose to the Puma again Corney played first and dropped a Stormscape Apprentice on turn 2, to which Russell replied with a Nightscape Familiar. Corney dropped another tapper of the Benalish persuasion on turn 3, and Russell untapped and played down his Mire Kavu. After untapping and looking at the Kavu for a few seconds Corney took the mountain from his hand and placed it into his land pile, amidst groans from Russell. A few turns later Russell tried to Zap the Apprentice, sick of having his offence tapped down, but it was met with a Confound. Russell complained to a bystander that he couldn't afford to play around Confound anymore because it was costing him too much time in the damage race, and the situation only got worse as his locked down Mire Kavu was Flametongued. Russell found it impossible to push damage through as everything he cast was either tapped down or met by walls like Prison Barricade. It took Corney a while to finally build up enough offence to push through, but there was no doubt he was going to win the game, it was only a matter of time before he drew into his Silver Drake, Aurora Griffin to do the final points of damage. 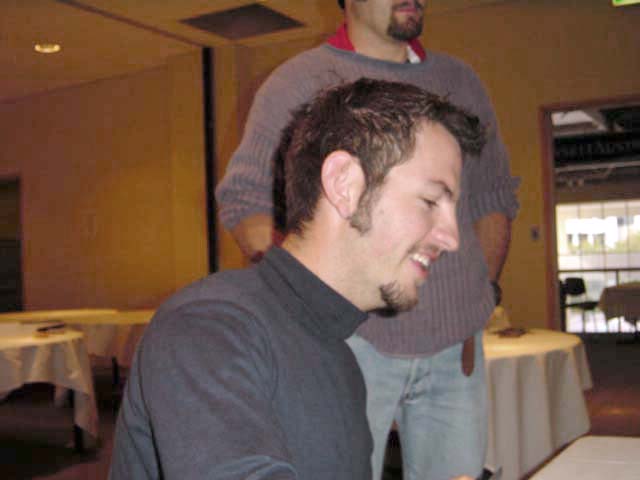 After taking so long to finish game 3 the two had a time call of 5 minutes to go as they were shuffling their decks for the deciding game. Corney must have been a little worried as his deck took time to stabilize the board and the time constraint could easily give the advantage to Russell's faster black red deck. However his draw for game 3 ensured that the only one who would have a chance of winning would be him. Casting a Sunscape Familiar on turn 2 and a Trapper on turn 3 it quickly became obvious that Russell would not be pushing through this defense. Russell tried to mount an offence comprised of Ravenous Rats, a Mire Kavu and a Nightscape Familiar but again his Mire Kavu was met with a Flametongue Kavu. It was at this point time was called and Corney almost looked as though he may take the game when he cast an Aurora Griffin and cleared the way for the two with a rushing river with kicker. However Russell again had his Magma Burst and the two were forced to live with a draw.