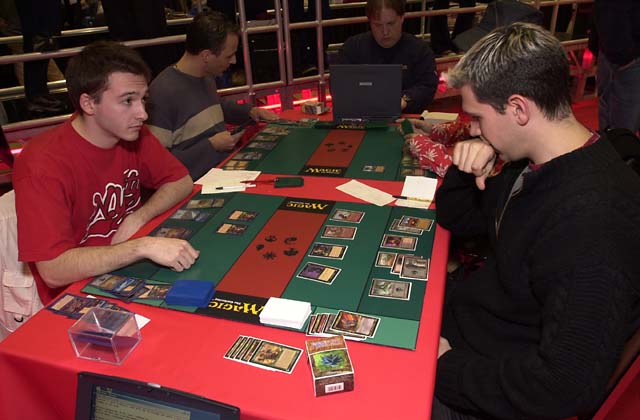 Hernandez won the die roll and chose to play. Klauser cast Nightscape Familiar and Hernandez tapped out to remove it with Urza's Rage before it could do him any good. Both players passed uneventful turns, then Klauser played Lobotomy.

Hernandez played Void for three, catching Undermine and showing him doubled-up Nightscape Familiars and Yawgmoth's Agendas. He played a Familiar and passed the turn. A Thunderscape Battlemage with the black kicker got an Agenda and the other Familiar. Klauser answered with Waterspout Elemental. Hernandez removed it with Terminate, sent with the Battlemage and added a Shivan Zombie to his side.

Klauser played Opt on his turn, looking for a fifth land, but finding none. He took four from Hernandez's team, then Recoiled the Zombie at end of turn. Hernandez took the opportunity to Rage the Familiar.

Klauser topdecked Salt Marsh, forcing his Agenda to wait one more turn. He Maliced Hernandez's Battlemage when it attacked. Hernandez replayed the Zombie and added a Familiar. Klauser Opted at end of turn, then untapped and made a Familiar.

He Recoiled the Zombie at the end of Hernandez's next turn, then replayed his Waterspout Elemental. Hernandez made no play. Klauser Lobotomized his deck's only Thornscape Battlemage. Hernandez replayed his Shivan Zombie and then Klauser got greedy. He Undermined it. The way was thus cleared the way for Hernandez's doubly-kicked Thunderscape Battlemage. This brutal play destroyed the Agenda and cost Klauser a Spite/Malice and Fact or Fiction. 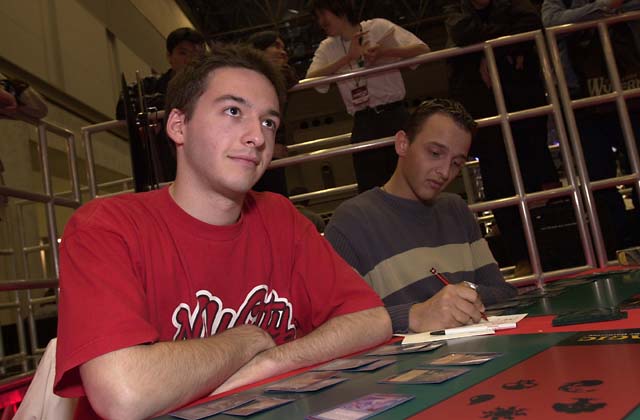 Klauser drew and played a second Familiar. Hernandez's Flametongue Kavu took out the Elemental, and added a Ravenous Rats to his team. Klauser dropped a Swamp, leaving his hand empty. He double-blocked the Kavu, taking four. Hernandez played Pyre Zombie and he conceded.

Hernandez mulliganed to start game two. He made a Shivan Zombie on turn two by way of Darigaaz's Caldera. Klauser Recoiled the land, setting Hernandez way back on mana development. At the end of Klauser's fourth turn he cast Fact or Fiction. He revealed two Opts, Island, Swamp and Addle, receiving the latter three cards.

Klauser then played a Waterspout Elemental to hold back Hernandez' Zombie. While Hernandez rebuilt his fragile mana base, Klauser took a peek at how bad his situation was with an Addle for red. He found him with a handful of high casting costs: Two Skizziks, Void, Thunderscape Battlemage and Crypt Angel, and only a Swamp and a Caldera to move towards them.

Klauser took Void. Hernandez played the Swamp. Klauser cast another Fact or Fiction. This time he showed Agenda, Opt, two Islands and a Swamp. Hernandez separated the Agenda. Klauser thought for a moment before taking the pile of four. He untapped and played Urborg Shambler, which diminished the threat of the Shivan Zombie. The Elemental come off defense and hit for three.

Hernandez was still rebuilding when Klauser Lobotomized him. The only new card in his hand was Pyre Zombie. Klauser pulled the Skizziks. He attacked for seven Hernandez did not block.

Hernandez found his fifth land and played a Battlemage with the black kicker. Klauser was ready with an Undermine that knocked him to seven.

A third Fact or Fiction from the Austrian showed two Undermines and some other cards. Klauser gestured towards the counters and said "That should be game." Hernandez replied "Oh, of course it's game, but you have to kill me."

Hernandez mulliganed again at the start of game three. He made a Pyre Zombie on turn four. Klauser Recoiled Hernandez' Shivan Oasis, which cost him a Void. Then he played Urborg Shambler to send the Zombie to the graveyard. Hernandez tried to escape with Flametongue Kavu, but Klauser was ready with an Undermine.

He untapped and Addled for Red, seeing two Crypt Angels and two Thunderscape Battlemages that went poorly with Hernandez' four land. He drew and didn't find a fifth. Klauser consolidated his power with Waterspout Elemental, but Hernandez drew another Flametongue Kavu, removing the flier then trading with the Shambler next turn. He had stabilized at five.

Hernandez drew his fifth land. He thought for a long while before making a Crypt Angel and bringing back a Flametongue Kavu. Klauser ran his Scuta into it. 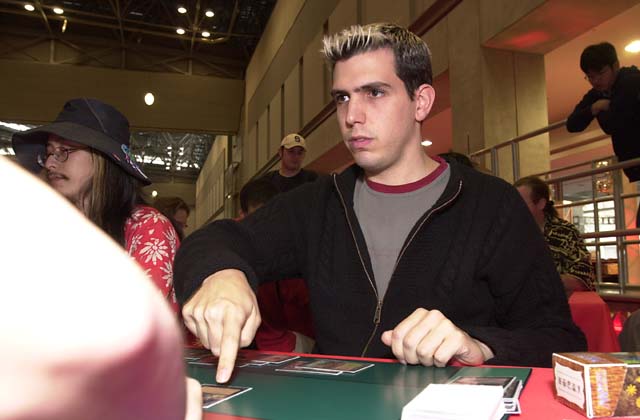 Hernandez untapped and cast Void, clearly for four. Klauser responded with Fact or Fiction, showing Agenda, Opt, Swamp, Swamp and Undermine. Hernandez split off the Undermine. Klauser took bigger, then revealed a Shambler and a pair of Fact or Fiction in his hand. He untapped, Opted into Lobotomy, and removed Hernandez' Thunderscape Battlemages.

Hernandez played the other Angel and got back the other Flametongue. Klauser played the Agenda with only a Salt Marsh untapped. Hernandez swung with the Angel and started thinking his next move. He eventually decided to play a Nightscape Familiar and sacrifice it to his Flametongue Kavu. Klauser chose to answer by kicking up the Scuta in his graveyard.

Things were grim for Hernandez. He chose to attack with both his creatures. His bluff was revealed when he lost his Angel at the Elemental's hands and had no follow up. He extended the hand, and Klauser shook it warmly.