Share Article
Share Tweet Share
was last year's big winner at this very event, and his signature card--Solemn Simulacrum--has been doing good work as a chump blocker in the days since. His opponent, Bob Maher, has won a Grand Prix, a Pro Tour, and Worlds, and is looking to immortalize his pleasant mug on his own card with a win here.

Bob's deck is comprised of Invasion and Seventh Edition exclusively, and is a decent red-green beatdown deck, even if it has a few junky cards. Thoren chose his packs with an eye towards black, but the packs didn't out for him; the best rare he has is Decree of Savagery. Blech.

Neither player drew great hands--Jens had two land (allowing him to play only two cards), and Bob had three Forests. Maher played a on turn 1, and Jens answered with Stonewood Invoker.

Bob killed the Invoker with , and swung for 1. Jens had no play on his turn, so Bob played a third land and sat back with , ready to add insult to injury. Bob Wounded him, and of course Jens drew a Swamp that turn, but had to remain stuck on 2 land.

With such a huge land advantage, Bob started in with the beats: , , and . Jens was never able to get another creature down, and scooped up his cards when the Djinn hit the stack.

Again Thoren kept a two-lander, and again Maher kept a bunch of Forests. This time it was Bob that suffered, as Jens was able to put out two creatures even though he didn't draw a third land until Bob had Creeping Molded one of the first two. Bob drew neither green creatures nor Mountains, whereas Jens drew enough lands to keep a steady stream of guys pouring out.

Bob's Elite Archers slowed the beats, but with no other plays, he succumbed to Jens's horde.

So far, he who can play his spells, wins.

Both players had reasonable draws in the third game, but Bob's going first ended up being huge. He played on turn three, then , then Creeping Mold on Thoren's only Mountain. Jens couldn't cast his spells, and Bob played bomb after bomb: Elite Archers, , and . Jens simply couldn't keep up.

Bob was later seen showing the replay of the /Creeping Mold game to his giddy pals. It certainly feels good when your 23rd card wins the game. Maher ended up 3-0 in the pack draft format with sets (Invasion and Seventh Edition) that other players stayed away from. 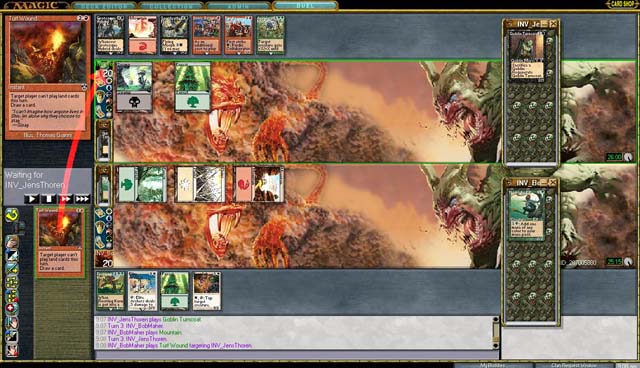