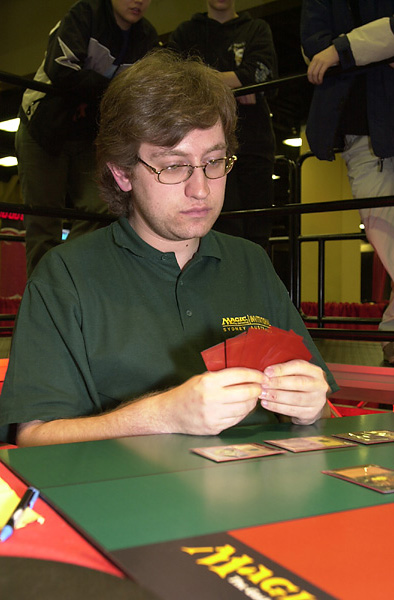 In the quarterfinals of the Masters Series, Christian Luehrs from Germany faced Alex Shvartsman from the United States. Christian had drafted a pretty powerful blue, white and black deck that held some bombs like Spinal Embrace, Tsabo's Decree and a handful of tappers. Meanwhile, Shvartsman had collected a nice bunch of creatures in various sizes, and altogether, he had created a deck that he felt had great synergy.

Christian won the die roll and chose to play. His opening hand held three Islands, a Worldly Counsel, a Benalish Trapper, a Stormscape Apprentice and a Probe, and Christian chose to keep that hand. Alex drew an Island, a Forest, an Exclude, a Llanowar Knight, a Kavu Chameleon, a Pincer Spider and a Quirion Elves, and he chose to keep as well.

The German cast a turn one Stormscape Apprentice, and then he attacked once before Alex got out a turn two Quirion Elves, calling white. Christian then played Worldly Counsel for two during Alex's end of turn step. He then untapped, attacked with his Apprentice and then he cast a Tower Drake after laying an island.

But Alex's deck had started rolling. The American attacked with his Quirion Elves and cast a Pincer Spider without kicker. Christian played a third island and then cast Probe to see if he could draw into more land, but the cards he drew were Tsabo's Decree, Benalish Trapper and Galina's Knight. He chose to keep all those three cards though, and discarded an island and a Phyrexian Reaper.

Alex didn't do anything during his turn. He didn't draw a land, and when he declared an attack, his Pincer Spider was tapped down. But it seemed that Christian should have kept the Island he discarded to the Probe as he missed his following land drop. So he merely attacked with his Tower Drake before passing the turn back to Alex.

The American drew into a Forest, and he cast it. When he tried to attack, his Spider was tapped down once again, and so he summoned a Llanowar Knight and said 'go'. Christian then drew a Swamp that he played. He then attacked with his Tower Drake to bring Alex down to 14 life, and then he attempted to cast a Phyrexian Slayer. But Alex chose to use the Exclude to keep it from hitting the table.

During his turn, Alex attacked with his Quirion Elves and Llanowar Knight to take Christian down to 16 life. He then played a Plains before dropping a Kavu Chameleon. Christian missed another land drop, but after attacking, he got out another tapper, a Stormscape Apprentice. Then, during Alex's turn, he figured it was time to tap down the Chameleon instead of the Spider. So the Spider finally got to attack along with the Llanowar Knight, and Christian was at 12. Alex then played some more creatures - a second Llanowar Knight and a Spirit Weaver.

Christian missed yet another land drop, but he had drawn a Benalish Heralds and so he cast it, finally getting a creature in play with enough toughness to be a useful blocker. He had to use his only Plains to play it though, and so Alex was free to attack. "Come into the red zone. You're welcome!" Christian proclaimed. "I'll be there shortly," Alex replied, and then he attacked with his Chameleon, Spider and two Llanowar Knights. Christian chose to put the Heralds in front of one of the Knights, and he also blocked the Chameleon with his puny little Stormscape Apprentice. Alex chose to activate his Spirit Weaver though to pump the blocked Knight, and finally, Christian tapped the Stormscape Apprentice to make Alex lose one life. Christian himself went down to eight life though, and Alex cast a Quirion Trailblazer as well and fetched an island before passing priority.

Christian finally drew a sixth land, and he played his Plains and said 'go'. Alex then attacked with his Llanowar Knights, the Spider, the Chameleon and the Trailblazer. But after attackers were declared, Christian cast the Tsabo's Decree he had held in his hand for a while, calling Elf. So the Trailblazer, the Quirion Elves and the two Llanowar Knights just died, and Christian got to see Alex's hand. Unfortunately, it didn't make him happier to see an Orim's Cure, a Faerie Squadron and a Thicket Elemental. Regardless, he blocked the Pincer Spider with his Benalish Heralds, and went down to four life. 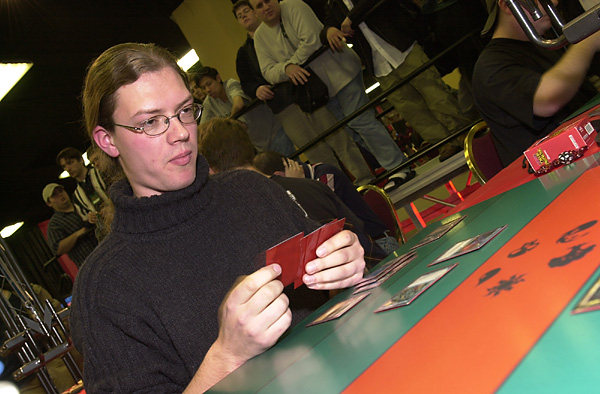 Alex then cast the Thicket Elemental with kicker, and so he got to start revealing cards off his library. The first creature card that came up was a Might Weaver, and so it came into play. Then Alex passed priority. Christian knew he needed blockers, and he played Faerie Squadron with kicker. So when Alex attacked, he first tapped down the Thorn Elemental, and then he tripleblocked the Kavu Chameleon with his Squadron, Tower Drake and Benalish Heralds. Alex chose to kill the Drake and the Faerie Squadron. Then he played his own Faerie Squadron - and after a little thinking, Luehrs scooped.

Christian chose to play first in game two as well, and his opening hand held the Benalish Heralds, two Islands, a Swamp, a Plains and a Spite/Malice. He chose to keep it, and Alex chose to keep his hand that consisted of an island, a Benalish Lancer, a Faerie Squadron, a Plains, a Forest, a Ruham Djinn and a Might Weaver.

Christian got a much better start than in the first game. He went turn two Benalish Trapper, turn three Tower Drake and turn four Benalish Heralds, while Alex got out a turn two Might Weaver, a turn three Benalish Lancer and then a turn four Dream Thrush. Both players attacked and played lands, and then Alex cast a fifth turn Kavu Chameleon.

But Christian had big creatures as well, he played a sixth land and after taking Alex down to 14 life, he cast Vodalian Serpent with kicker. Alex spent some time pondering on what to do during his next turn. He had only one Island in play, and the Dream Thrush could turn it into something else to prevent Christian from attacking with his Serpent. However, Alex chose to play another island and then cast Faerie Squadron with kicker. He then attacked with his Dream Thrush to take Christian down to 17.

The German then attacked with his Vodalian Serpent. Alex tried to kill it by doubleblocking with his Chameleon and the Benalish Lancer, but Christian used Malice to kill the Lancer before damage and the Serpent survived. Christian then played a Stormscape Apprentice.

Alex tried to attack, but the Faerie Squadron was tapped down. He then played a Ruham Djinn, and as white wasn't the most common color of permanents, it was 5/5. Unfortunately, that was to be his bane. Christian Spinal Embraced the Djinn, then he tapped the Might Weaver and attacked with the Djinn, the Benalish Trapper, the Tower Drake, the Heralds and the Serpent. Alex blocked the Serpent with the Thrush, but as Christian went up to 22 life and the Djinn was destroyed, he saw no reason to continue the game. 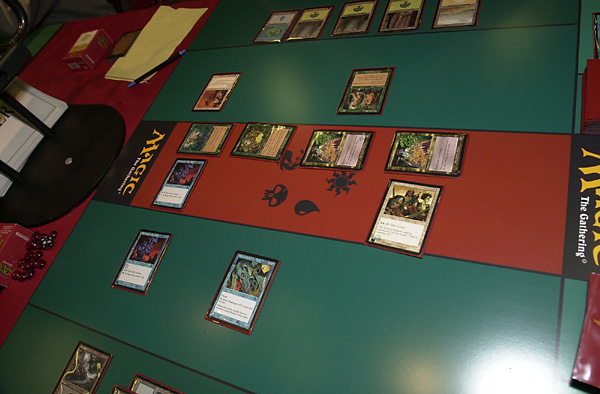 So Alex got to play first in the third and final game. He kept his hand in spite of the fact that he had drawn five lands, a Kavu Chameleon and a Pincer Spider. Meanwhile, Christian kept his hand consisting of three lands, two Tower Drakes, a Spinal Embrace and a Spite/Malice.

Both players played land during the first two turns. Alex then cast a turn three Pincer Spider, while Christian summoned a turn three Benalish Trapper. The American then attacked with his Spider before playing a Might Weaver.

Unfortunately, Luehrs had failed to draw a fourth land, and so he did nothing at all during his fourth turn. He was able to tap down Alex's Spider though, but the Weaver got through for two and Alex then dropped a Kavu Chameleon. Drawing a fourth land, Luehrs chose to Malice it as Shvartsman was all tapped out.

Still, Alex had plenty of creatures available. He attacked with the Spider and the Weaver to take Luehrs down to twelve, and then he played a Llanowar Knight and a Quirion Trailblazer that gave him another Forest. Christian got out a Benalish Heralds, but when Alex summoned a Thicket Elemental with kicker and then got a Razorfoot Griffin into play as well, things looked really bad for Christian. He tapped down the Pincer Spider, but still, Alex got to attack with the Llanowar Knight, the Might Weaver and the Quirion Trailblazer. "What a beating!" Christian commented, blocking and killing the Knight.

Knowing that he needed blockers badly, Christian dropped a Stormscape Apprentice and a Tower Drake during his own turn. But Alex had some tricks up his sleeve. He cast Angelic Shield, and then he declared an attack. Christian tapped down the Thicket Elemental, but before declaring attackers, Alex chose to sacrifice the Shield to bounce the Benalish Heralds back to Christian's hand. Then he attacked for seven with his Griffin, the Trailblazer, the Spider and the Weaver. Christian, at nine, chose to block and kill the Weaver and the Trailblazer, but he still went down to five life, and still without his sixth land, he couldn't do anything but re-cast his Benalish Heralds and wait for Alex's next attack.

Alex did indeed attack. The Thicket Elemental was tapped down, but the Griffin flew over Christian's defense and took him down to three. Alex then passed priority, and Christian attempted to cast a Phyrexian Slayer. But Alex had drawn one of his Excludes, and after taking a look at the board situation, Christian realized that the game was over.