Round 3 Feature Match: The Darker Side of Bob

feature match pits The People's Champion in Sol Malka, former PTQ stalwart and architect of The Rock and His Millions, vs. well, Osyp, who is simply The People. Osyp rode the Pro Club Train to get here, while Sol was content to slip in on rating.

Sol dropped a turn-one Castle and Isamaru, while Osyp went into accel mode with Llanowar Elves. They traded beats for a turn and Osyp dropped Watchwolf and put the brakes on the suddenly smallish hound. 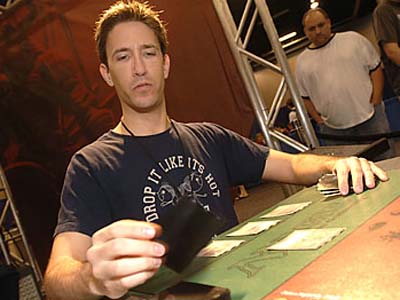 Sol made Dark Confidant and passed it over with a nearly audible sigh. After Osyp sent and Sol declined to offer a speed bump, Osyp played Maslow and dropped Hierarch, further placing the burden of "get a move on" onto Sol's shoulder.

Damned if you do or don't, Sol took Kodama, and played a second Bob, ready for chump mode. Osyp sent in Hierarch and Watchwolf - Isamaru and a Bob took out the Hierarch and Sol took a dip in the pool that is 13 life. Osyp simply made another Watchwolf, not about to let Sol breathe.

Bob turned up Castigate, knocking Sol to 11. He dropped Orzhov Pontiff to kill the Elves and Bob went in, knocking Osyp to, ow, 21. Another Isamaru joined the team, and it's shipped back to Osyp, who again offered no quarter and sent in the team.

Again, Isamaru stepped into the Watchwolf fray, this time aided by Pontiff, while the 4/4 crept though and got haunted ex post facto. Another Guildmage hit with a thud, and now we're close to "Will Bob Kill Me Or No?" mode.

The Confidant turned up land, and Sol thought and thought and thought, and decided his best course of action was to Mortify Hierarch, which gave the Guildmage -1/-1, then Plagued Rusalka jumped onto the table and took one for the team, which killed, oddly, Osyp's team.

Osyp played Arashi, and shipped it to the M. Night Shyamalan phase, where Bob turned up Ghost Ow Council Ow, and put Sol at the precarious total of three. Nevertheless, Sol Castigated Yosei, eliminating one of his potential worries, Mortified Arashi, which nails another, and sends with Bob, knocking Osyp to 16, and not a card in hand to be seen.

Osyp drew and passed lighting quick, probably excited about the possibility of, well, just winning right the freak now, but Bob turned up a land. Sol dropped Jitte, equipped and prepared to get back into this game, but Osyp calmly tapped four mana and played Seed Spark with the kicker.

The players compliment each other on their good draws, but with Osyp at 14 and Sol at 3 and no mana left to play Ghost Council, the upper hand appeared to belong to the guy who actually looks forward to the mystery that is "the top card of my deck." Sol thought some more, then dropped another Bob. Osyp pauses for a moment, then peels…

Yes, he is good at Magic.

It hit, a token taps Bob, and in goes the other and knocks Sol to 2. With two Bobs on the table. Upkeep phase rolls around, and the top card of Sol's library is Descendant of Kiyomaro, giving Osyp Game 1.

Almost immediately, Osyp asked Sol why he didn't play Ghost Council and rid himself of his Too Many Bobs. After a little banter in which neither player was able to convince the other that his motives were most pure, we were on to sideboarding.

Sol removed two Isamaru and one Kami of Ancient Law for two Wrath of God and another Jitte, while Osyp spent some time looking at his WWF token cards before he realized that it wasn't his sideboard.

His cards were below the belt, so what he may or may not have sided in is anyone's guess, though Shining Shoal seemed like they wanted to attend.

Sol took a mulligan, kept his six and dropped Shizo, while Osyp made Vitu-Ghazi. After siding out a Kami, naturally Sol played one on turn two, while Osyp made due with a bounceland and pitched Vitu-Ghazi, the bestest land that doesn't come into play tapped ever.

Sol sent in the Kami, and then, since he sided out a Kami, plays another and a bounceland. Osyp dropped Wood Elves, nabbed something Foresty, and readied to take some beats.

A Jitte sneaked onto the board from nowhere, finding its way onto a Kami. Osyp declined to block and took four to the face, going to 16. More importantly for Sol, the Jitte got two counters, one of which he used immediately to kill the Elves. Bob joins the crowded house on Sol's side. 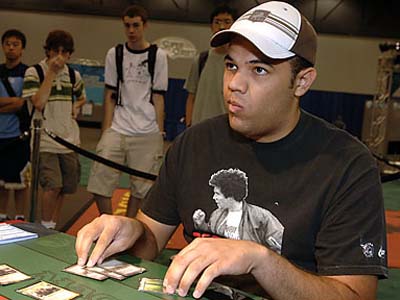 Bob turned up a land, Castigate nabs Congregation at Dawn over Watchwolf, and a pair of Guildmages, then Sol shipped is back.

Yosei entered the zone, knocking Sol to 15, and a Guildmage hits with four mana open and Miren. Bob turned up Orzhov Pontiff (Sol-12), and Sol thought for a few moments, much like anyone facing down Yosei tends to do. He sent Kami into the breach, it gets through, and then he Wraths, tapping himself down in the process. Sol dropped a land and played Isamaru.

Osyp, who indeed got to untap, did so, and then played Watchwolf, Selesnya Guildmage, and oh, Jitte, which may be considered a good "recovery" from Wrath of God. Kinda.

Sol played draw, go, while Osyp equipped the Watchwolf and sent in the team. No blocks equals Sol's at 7 life and Jitte had 2 counters.

Sol got to untap and cast Descendant with mo' better cards, while Osyp took the "make a token" train at end of turn. Watchwolf turned sideways and Isamaru got himself run down like a dog - four counters on Jitte.

Needing something that isn't a discard spell, Sol drew Castigate. It grabbed another Watchwolf. Pontiff hit and killed a token; Osyp simply made another at end of turn.

Joe Black threw all his guys into the red zone, and with his myriad (and highly visible) combat tricks, he found a way to ruin Sol's board and keep his own intact. Facing down Watchwolf with four counters, Guildmage and a token, Sol drew what was not Wrath of God and scooped them up.