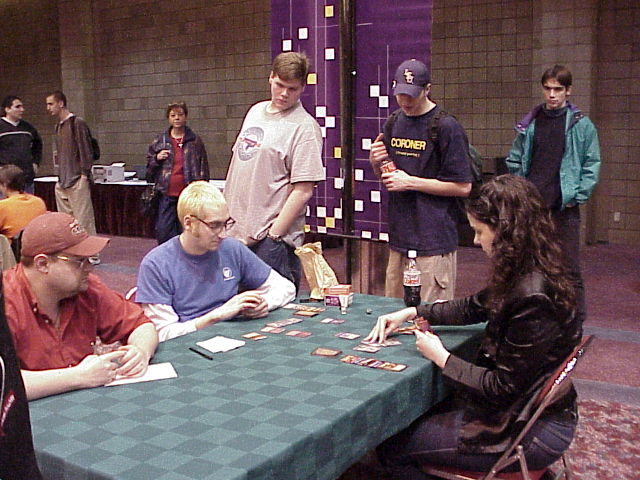 Round 3 was designated the "old-timers feature match round" by Scott Larabee. While the other featured match was long time pro player Tony Tsai against East Texan Fletcher Peatross, this match involved David Bartholow, an original member of Team Deadguy, founded at Cornell University, and Michelle Bush, a long time member of Your Move Games, Boston's powerhouse magic team. Both have a half dozen Pro Tours under their belts.

Michelle Bush won the flip and opted to play.

Bush was playing a RBU deck, the most popular color combination of the tournament (and likely the block), while Bartholow was sporting RBW.

Bush and Bartholow each played lands on the first two turns, and Bartholow cast a Shivan Zombie to apply early pressure. Michelle answered with a Viashino Grappler, eying the Recover in her hand, and hoping to take advantage of a trade. Bartholow attacked and Bush traded the Grappler for the Zombie. Bartholow followed up with a Vicious Kavu. Bush, out of land and facing a stall in the face of the dangerous 4/2 attacker Probed without kicker, looking for land and an answer. Bush found some relief, drawing a Kavu Scout and a couple of swamps, discarding a swamp and a Firescreamer. Bartholow attacked for 4, bringing Bush to 16 and played a Hooded Kavu, continuing his early BR beatdown, though still lacking any white mana. Bush was holding a Zap and peeled a Cursed Flesh.

After considering whether or not to Flesh/Zap the Vicious Kavu or play a blocker, with Bartholow stuck at 3 lands, Bush dropped the Kavu Scout and passed the turn. Bartholow played a Plains,and removed the Scout with an Agonizing Demise, clearing the way for his 6-point attack (Bush: 10). Bush drew into her fifth land, but still not a second red source, which would have allowed her to stabilize the board with a Pouncing Kavu. After playing the Island, Bush cast a Cursed Flesh on the Vicious Kavu, putting into Zap range. Bartholow drew and attacked. Bush Zapped the Vicious Kavu, killing it, and took 2 from the Kavu (Bush:8). Bartholow played a fifth land and cast Razorfoot Griffin.

Bush drew into and cast a Faerie Squadron, played a second mountain and passed the turn. Bartholow removed the Squadron with a Tribal Flames and pressed the attack, bringing Bush to 4. Bush was in serious trouble. After momentarily holding her hand above her deck, perhaps in an effort to appease the topdeck gods, Bush drew Crosis the Purger. Bush played Crosis, and passed the turn. Bartholow, sitting pretty a few moments before, looked less than pleased. Bartholow had the option to attack, bringing Bush to 2 and losing the Griffin, or to hold back on defense to protect his hand from Crosis' discard ability. Looking at the Rout in his hand, and the single plain on the board, Bartholow decided that the Griffon should play defense. 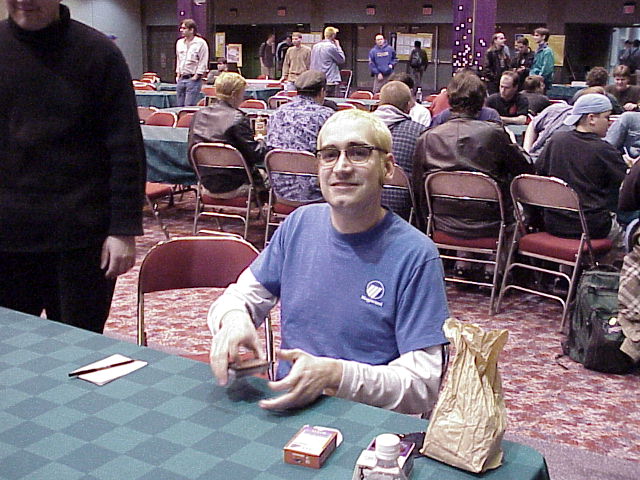 Bush drew and passed the turn, holding Crosis back. Bartholow drew, looking for his second plains, but found only a non-white Cameo, and passed the turn. Bush responded by removing the Griffon with a kicked Agonizing Demise (Bartholow: 18). Bush continued to draw the platinum hits, dropping a Keldon Necropolis, and seemingly taking control of the game. To follow it up, Bush cast a Recover to get back the Firescreamer she had earlier discarded to the Probe, and cast the Firescreamer, again opting to keep Crosis on D.

Bartholow drew a Recover, and seeing that his time was beginning to run out, began to dig for the second plains. He cast the Recover to get back the Griffin, drawing a Mountain off the cantrip effect, and recast the Griffon to defend against the Firescreamer. Finally feeling comfortable with her hand, Bush attacked with Crosis. Bartholow gambled and decided not to block, and went to 12. Bush did not use Crosis' ability, and instead dropped a Pouncing Kavu without kicker, leaving mana open to use the Necropolis. Bartholow drew another mountain, and played it. Bush drew and attacked with Crosis, and Bartholow chump blocked with the Griffon. Again, Bush decided not to play a creature to leave mana open for the Keldon Necropolis. Bartholow finally drew his second plain and attacked with the Kavu, which traded with the Firescreamer (Bush threw the Firescreamer at Bartholow with the Necropolis to bring him to10). Bartholow was finally able to clear the board with a Rout, and passed the turn.

Things looked momentarily favorable for Bartholow, but Bush was holding creatures back, not because she anticipated a Rout, but rather because she wanted to keep Necropolis mana available, and cast another bomb - Blazing Specter - whose attack brought Bartholow to 8, followed by a Hooded Kavu. Bartholow drew, and cast Shivan Emissary with kicker, destroying the Hooded Kavu, but had no answer for the Specter which, combined with the Keldon Necropolis, finished Bartholow off over the next few turns. 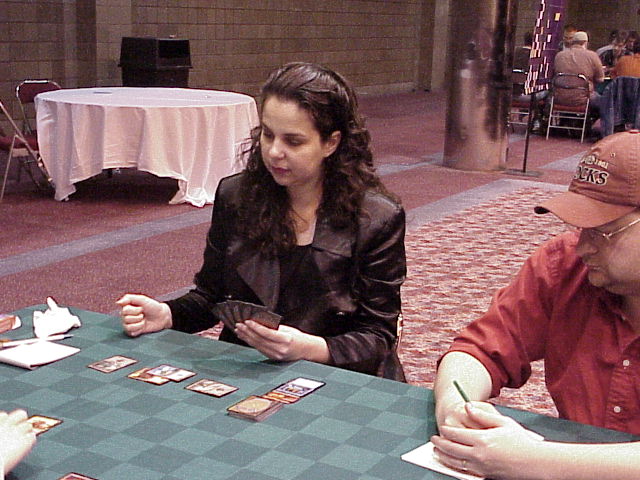 Bartholow sideboarded out his white, adding Blue for a Repulse, a Vodalian Hypnotist and some other manipulation, while Bush added a Hypnotic Cloud (likely to try to knock the not sideboarded out Rout from Bartholow's hand).

Bush mulliganed and kept a six card hand. Bartholow kept a two land hand, but failed to draw a 3rd on either his 2nd or 3rd draw phases, and was left with a Vodalian Hypnotist which was reduced to attacking turn 3 (Bush: 19), rather than eroding Bush's hand. Bartholow drew a land and activated the Hypnotist, causing Bush to discard a land. Bush Zapped the Hypnotist, making up for the card loss, at the end of Bartholow's turn, and played a Viashino Grappler. Bartholow answered with a Hooded Kavu, and Bush played a Pouncing Kavu and attacked with both creatures. Bartholow traded the Hooded Kavu for the Grappler, and took 3 (17). Bartholow drew and passed, but managed to Agonizing Demise the Pouncing Kavu during Bush's next attack step. Bush Recovered the Pouncing Kavu and passed the turn. Bartholow cast a kicked Faerie Squadron, but Bush re-cast the kicked Pouncing Kavu and brought Bartholow to 14.

Bartholow, having only a single swamp on the board, was unable to cast a kicked Duskwalker. As he did in the first game, Bartholow began to dig, and cast a Recover to retrieve his Hypnotist, drew the needed swamp from the cantrip effect, played the Hypnotist and aggressively attacked with the Squadron (Bush: 16). Bush, however, had answers, and removed the Hypnotist with a Cursed Flesh clearing the way for the attacking Kavu (Bartholow: 11). Bust cast a Kavu Scout and passed the turn. Bartholow tried to race, and removed the Scout with a topdecked Assault/Battery, attacked with the Squadron (Bush: 13) and cast a kicked Duskwalker. Bush simply swung with the Pouncing Kavu (Bartholow:8) and passed. Bartholow seemed to have gained the advantage, and attacked with both the Duskwalker and Squadron, but Bush again had the answer and Recoiled the Duskwalker. (Bush: 10). Bartholow, seeking to regain his fleeting advantage, re-cast the kicked Duskwalker and a Kavu Aggressor, but again, Bush had the answer and killed the Aggressor with an EOT Scorching Lava. Bush attacked with the Pouncing Kavu (Bartholow: 5) and killed the Squadron with a kicked Agonizing Demise (Bartholow: 2). Bartholow could not find any solutions, and after chump blocking the Pouncing Kavu with the Duskwalker, conceded to Bush's freshly cast Zanam Djinn.