Round 3 Feature Match: Do You See the Plan?

So Sam Black is kind of a legend around Japan. I first found this out at Pro Tour Kuala Lumpur a few years ago when I saw him sitting with a group of Japanese players playing the old Avalon Hill Board Game Acquire. Later, at another Japanese event, I found him huddled in the middle of another group of Japanese players throwing dice for some other board game. Curious, I walked up to another Japanese Pro to ask what was going on. With a massive smile on his face, he beamed to me, "Oh! True Gamer Sam Black!" Apparently, Sam's love of all games was infectious enough to win over every Japanese gamer on the face of the earth, earning him one of the best Magic nicknames since The German Juggernaut or The Dragonmaster. Or Turbo-Bob.

While Black is a legend in Japan, his opponent this round is a legend period. Not to discount Black's impressive skills. He is an incredibly well respected, and very high-level player. But Shuhei Nakamura is a Hall of Famer. He has traveled to the ends of the Earth to play Magic, and has been playing with the best in the game for well over a decade now. One of the original vanguards of Japanese Magic, Nakamura was honored with an induction to the Magic Hall of Fame just this past year, an induction well worth it for all of the things he has done for Japanese Magic, and the entire community as a whole. One of the first Japanese players to truly inspire fear on the Pro Tour, Nakamura is a living legend of Magic, one whose career isn't going to bite the dust any time soon, at least not if he can help it. He is currently fighting his countryman Yuuya Watanabe for the Japanese slot in both the Players Championship and Magic World Cup, sitting twelve points behind going into this event.

Before the match, Black showed me a quick peek at his deck, revealing a Geist of Saint Traft, Invisible Stalker, and Wolfir Silverheart. "You see the plan?" Black asked with a grin? I chuckled a little bit as he added, "You should be happy! The games aren't going to last too long!" Nakamura sat, shuffled , and fired off a quick mulligan as play got underway. 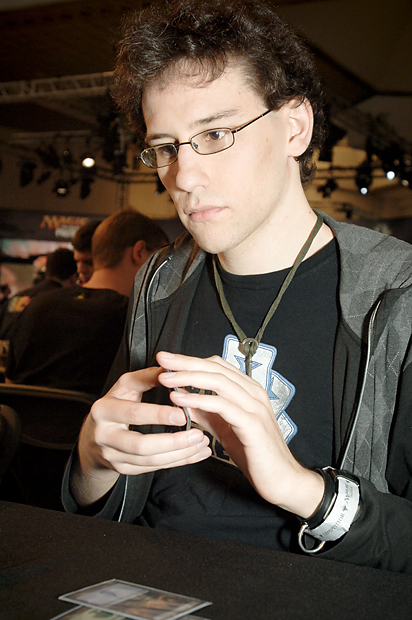 "Do you see the plan?" Black asked, as he shows off a Geists of Saint Traft and a Wolfir Silverheart.

Nakamura was the first on the board, making an Avacyn's Pilgrim and a Thalia, Guardian of Thraben. Meanwhile, Black cycled through his deck with a pair of Abundant Growths, also using a silent Departure to set Nakamura back a turn by bouncing his Pilgrim. Nakamura simply added a pair of fresh ones to his team, as well as a Champion of the Parish. To match this massive army, Black merely had a pair of Invisible Stalkers. Nakamura looked as though he would completely lock the game up soon. He attacked with his team. Black chumped the Champion with one of his Invisible Stalkers and blocked one of the attacking Pilgrims with a freshly-cast Geist of Saint Traft. He managed to get a Wolfir Silverheart into play, but Nakamura had the Fiend Hunter to shove it out of the way and attack for the win. Black was right that things wouldn't take long, but I don't think that is what he meant. Not a bad mulligan for Nakamura.

Black started out with a mulligan on the play in this game, while Nakamura kept his original seven. Nakashu's draw was a bit slower than his last, though, needing to draw a Forest on his second turn to begin powering out his creatures via Avacyn's Pilgrim. When he was finally able to, he made a Silverblade Paladin to go with a pair of the speedy Humans, though Black was already on the board with a Geist of Saint Traft wearing a Spectral Flight. The Legend threatened to end the game in two turns, much as Nakamura had done to Black the game before. All Nakamura could do was attack for 4 with his Silverblade Paladin, play a third Pilgrim, and pass the turn. Black attacked, and Nakamura dropped to 4. At the end of turn, Nakamura used a Restoration Angel to flicker the soulbound Avacyn's Pilgrim, resetting his Silverblade Paladin. He then played a Fiend Hunter on his turn, pairing it with his Paladin. The Fiend Hunter ate Black's lone blocker (Avacyn's Pilgrim), but not before Black tapped it to make Wolfir Avenger. Nakamura then attacked with his Angel, dropping Black to 13. Black ended any speculation about Nakamura's chances when he added a Spectral Flight to his Avenger and smashed over for a boatload of flying damage, snatching the second game before it could get out of control.

Neither player made what was becoming an auspicious mulligan in this final game of the match. Once again, Nakamura started lightning quick. Avacyn's Pilgrim followed by Thalia, Guardian of Thraben and Mayor of Avabruck. Black once again built things up with an Avacyn's Pilgrim of his own. For his efforts, he made a Dungeon Geists to slow down a mana-light Nakamura, keeping his Pilgrim under lock and key. Thalia continued to beat, however, and Black dropped to 14. A Champion of the Parish Followed, and things looked like they were more or less even. 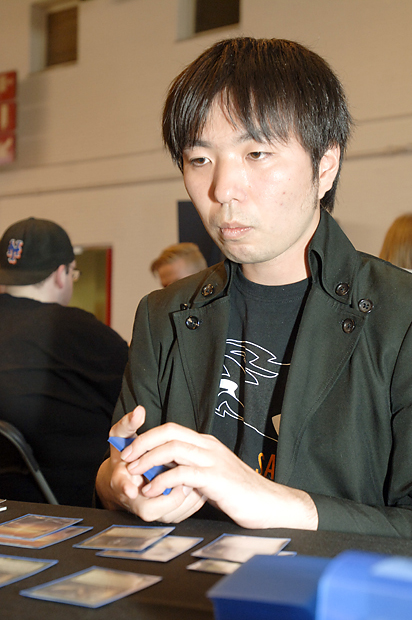 Hall of Famer Shuhei Nakamura is never an opponent you want to take lightly, no matter how light-hearted he is outside of a match.

Black upped things a tad with an Invisible Stalker on his turn, attacking Nakamura with his Geists, knocking him down to 17. When Nakamura added a Nearheath Pilgrim to his board and paired it with the Champion of the Parish, things swung decidedly in his favor. Black kept things under control, however, flashing in a Wolfir Avenger to trade with the Champion. Nakamura's inability to draw a third land was really hurting him, as he was unable to commit enough to the board to outrace Black. When Black added a Tree of Redemption and an Increasing Savagery to his Invisible Stalker, Nakamura's mana troubles became lethal. Two turns later, Nakamura conceded, clearly disappointed at how the match had ended.