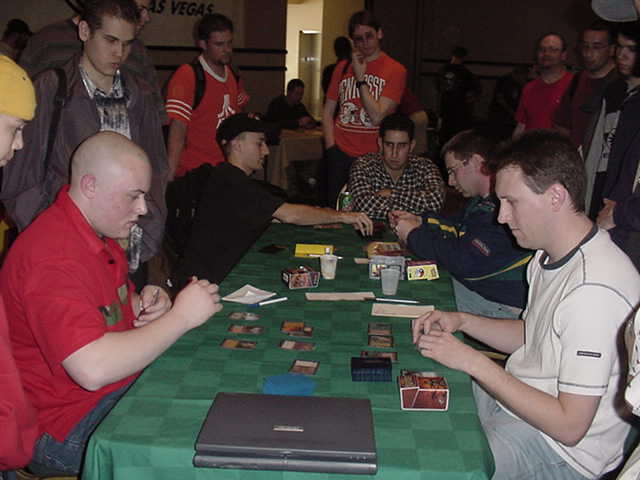 I've used the intro "New School versus Old School" on a couple occasions, but I'm not sure it's ever been more appropriate. Frank Gilson was a member of the first real magic team - the Pacific Coast Legends - and a regular during the early days of the Pro Tour (and before). Now Gilson works for Blizzard, Magic is just a diversion instead of a lifestyle, and he spends his days working on Warcraft 3. (Before the round started he promised beta CDs to both his opponent and this Sideboard reporter.) On the other hand "ptr," as Szigeti is known to his irc buddies, is the loud guy with the shaved head that has begun putting up articles on the internet that are either hilarious or insulting, depending on your point of view. His tournament results have started to gain him some attention too. 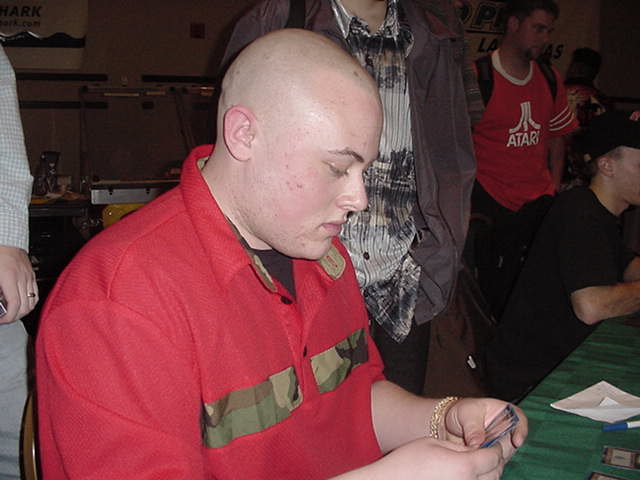 Szigeti was running a Tinker deck with Winter Orbs. Multiple people came up to me before the weekend explaining that the environment has come around to a point where Winter Orb is good again and that's one issue I'll be keeping my eye on this weekend. Gilson was running a control deck with Finkels, Deeds, Call of the Herd, and a bunch of permission.

Gilson was very stoical as he took three mulligans before the first game. "A couple of years ago I would probably have been pissed, but now I'm just happy to see my name still in lights." Szigeti played Grim Monolith and Ancient Tombs, which allowed him to hard-cast a turn 3 Phyrexian Colossus! On his next turn Szigeti Tinkered out a Voltaic Key, dropped a Winter Orb, and watched Gilson concede. 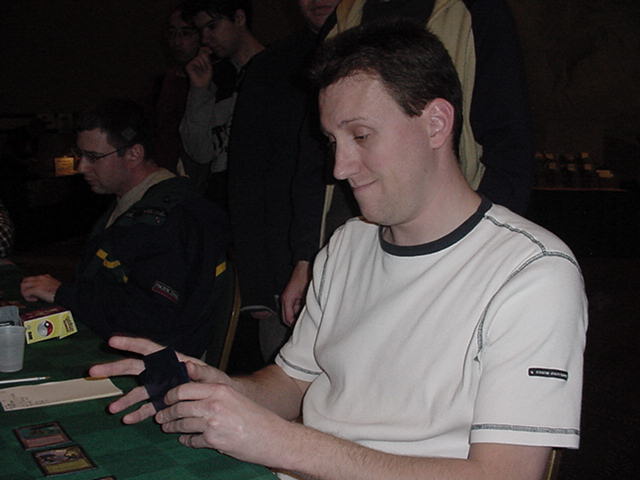 Gilson had a much better draw for game 2, but it was hard to decide whether to Duress Grim Monolith or Tinker. He took the Monolith (which would have been nuts with Voltaic Key also in Szigeti's hand) and then tapped out for a turn 3 Pernicious Deed, inviting Szigeti to play Tinker. Szigeti just stared at the board and wondered aloud "What in god's name are you playing, anyway?" Szigeti didn't get to see much of it in game 1. Szigeti decided he just had to know so he Tinkered out his favorite sideboard technology: Jester's Cap. Two Spiritmongers and a Deed left the game, Szigeti got his information, but now his Tinker was gone and that Pernicious Deed could wipe out all his artifacts whenever Gilson decided to pull the trigger. Gilson dropped a (regenerating) Spiritmonger and Szigeti tried to hold it of with Phyrexian Processor. With Deed in play Szigeti knew he was in trouble and he soon conceded rather than forcing Gilson to go through the motions.

Now that he knew hat was going on, Szigeti re-sideboarded for game 3 and dropped a first turn Defense Grid off an Ancient Tombs). Gilson's Duress then deprived Szigeti of his only business spell (a Tinker) and Szigeti's draw suddenly looked a lot worse. Szigeti burned through a couple of Mind Stones, but all he came up with was a second Defense Grid, a Thran Dynamo, and a Voltaic Key. Szigeti put them all on the table so he'd be ready whenever he finally top-decked a business card, but Gilson punished him by playing a Deed, followed by a Spiritmonger. Szigeti did draw a Processor, and he played it for one to force Gilson to blow his disk. Still facing down Spiritmonger, Szigeti could do nothing but complain "I can't beat a Deed."

4 Call of the Herd 4 Duress

3 Spiritmonger 4 Force of Will
51 Cards