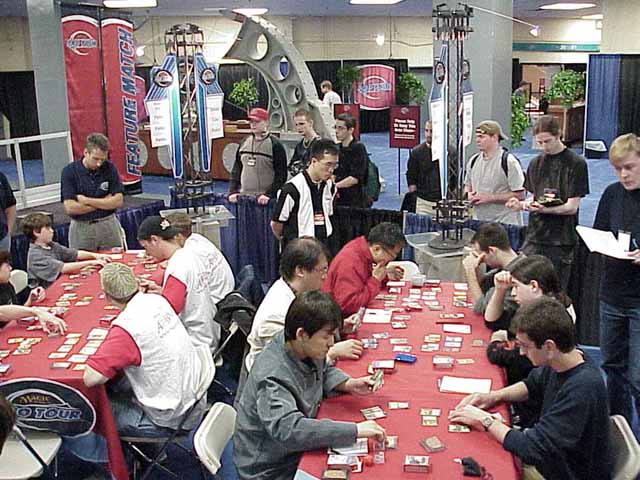 This matchup featured a selection of great players and one team with a true international flavor. Game Empire consists of Brian Selden, Alan Comer and Kurt Burgner who all have several years of Pro-Tour experience behind them. AlphaBetaUnlimited.com who were sporting very smart, matching, sponsored shirts is made up of Noah Boeken, Ryan Fuller, and Chris Benafel. Although all three are from different countries, they are all great friends, and this comes across when they play. Both teams were at 1-1 after the first two rounds, and really needed to win this round or else perhaps be unable to make day two.

The first match-up pitted former World Champion Brian Selden against current European Champion Noah Boeken. Selden started with some fairly irrelevant Grey Ogres whilst Selden was the earlier aggressor with a third turn Silt Crawler. A Ramosian Captain from Selden was met with a Lunge before it had the chance to recruit any more Rebels into play and soon after Noah used a combination of Spidersilk Armor and a pitched Cave-In to totally sweep Selden's side of the board, coming across for significant damage in the process. Noah followed the following turn with a Hunted Wumpus which gave Selden a free Arc Mage but he still had nothing to deal with the huge 6/6 monster. Although Selden draws a Defender en Vec which is able to stall for a few turns, he found no answer to Noah's Wumpus and it went all the way, much to teammate Benafel's vocal approval.

In the meantime, Burgner was wrapping up his first game against Benafel. Although Benafel started well with a Flowstone Wall, Avenger en-Dal and Crossbow Infantry to stall the ground, and a Voice of Truth to provide an offence in the air, he quickly fell behind. Burgner was able to use a Seal of Fire to take out the Infantry, and summon a lot of small Mercenaries. A Mageta's Boon saved Benafel's Avenger en-Dal momentarily but when Kurt launched an all out attack the following turn Benafel chose to block a Spineless Thug with the now 2/3 Avenger. Burgner was able to recruit an Agent of Shaku and use it to pump up the Thug's power and take out the Avenger. With the Avenger no longer around, and an Agent of Shaku available to pump any of Burgners creatures Benafel's life fell swiftly to zero.

Alan Comer's Blue/Green deck faced Ryan Fuller and his Black/Blue deck in the third match-up of this round. Although Comer was able to get in early damage with a Spiketail Hatchling and Stormwatch Eagle his lack of removal soon began to affect him. A Waterfront Bouncer and a Drake Hatchling made things very difficult for Comer, and when Ryan drew into his Coastal Piracy it was his turn to get aggressive. Drawing additional cards every turn allowed Ryan to find answers to all of Comers threats. A Rib-Cage Spider was taken out by a Seal of Doom, Comer's Stormwatch Eagle got Thwarted after being bounced, and Comer had no way in his deck to get back into this game and soon conceded.

Noah was the first to finish his match against Selden. He allowed Selden a couple of turns to bring in some Rebels and then swept them all with a fifth turn Cave-In before beginning to cast his own creatures. Selden attacked with a Crusher, pumping it to 7/1 after Selden elected not to block. Selden then Lunged it in an effort to remove the Crusher, but Noah had the Invigorate and suddenly Selden found himself staring down an 11/5 monster. Noah pumped it one last time for luck, dealing twelve to Selden taking him from eighteen life to just six in a single attack. Selden had no answer to the Crusher in hand and tried to race with a Fresh Volunteers and a Diving Griffin, casting a Crossbow Infantry to chump block.. However when Selden chumped the following turn Noah dropped a Tiger Claws onto the Crusher and pumped it to a 7/3 dealing six points of trample to Selden killing him and giving Noah the match. As the other two matches were still in progress Noah offered to play a friendly with Selden, but Selden had clearly had enough of Noah's deck for one day and politely declined.

Comer and Fuller were well into their second game at this point. Comer was once again the early aggressor with a Chimeric Idol and Rootwater Commando. Fuller fortunately had a Withdraw to slow the beats and then a Vicious Hunger to take care of the Islandwalking Commando. Fuller began to accumulate his own forces with two Deepwood Ghouls, a Stormwatch Eagle and a Stinging Barrier although was unable to attack because of a Rib-Cage Spider on Comer's side. Comer at this point was sitting on five lands and a Bribery in his hand but held onto it for several more turns. Before Comer was able to use it though Fuller dropped a Spiketail Drake and then was able to use this to counter the Bribery when Comer used it. Comer was fairly happy just to get rid of the Drake although if he'd known he could've had either a Waterfront Bouncer or a Rootwater Commando from Fuller's deck he may have made another decision. As the game stalled things quickly started to favor Ryan. He dropped a Rathi Assassin and soon after that his Waterfront Bouncer came to play. These two creatures allowed him to totally dominate Comer who had no way to remove either one of them. It was only a matter of time at this point and Fuller bounced and assassinated his way to victory after a few short turns.

With the match already decided the final game between Burgner and Benafel wasn't that relevant. Burgner used a Wall of Distortion early on to strip Benafels hand of spells and once he knew Benafel had no tricks to rely on Burgner used his removal spells to take out most of Benafels key creatures. Benafel's one hope to win rested on a Rock Badger which he was very happy to top-deck with no cards in his hand. This creature could finish Burgner in just a few turns, but much to Benafel's disgust it was neutralized with a Greel's Caress from Burgner. With no cards in hand Benafel's only answer was a loud "Whatever!". Using his Mercenary engine Burgner was easily able to recruit enough creatures to swarm Benafel and win his match, but with both teammates losing it was little consolation.