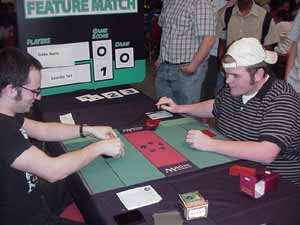 This round saw internet personality Geordie Tait square off against U.S. National Finalist Gabe Walls. The charismatic Walls was in fine form, with many a “Yaus!” for his many spectators. Tait was more reserved, intent on victory. He, like so many others, is playing Goblins. Walls’s deck choice raised a few eyebrows. Boasting a ludicrous mana base, it is a blue-red control deck that splashes, SPLASHES mind you, for Explosive Vegetation. Board sweepers, Complicate and Discombobulate, and Future Sight and Form of the Dragon round things out. He claims Goblins is its best matchup, this would be an acid test.

Both players led with a mountain, and Walls acted innocent.

“Could it be the mirror?” – Gabe Walls

Tait followed up with another mountain and a Piledriver. 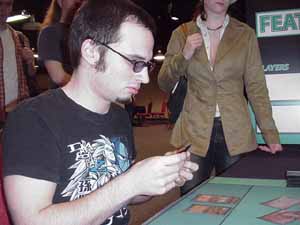 Tait didn’t bite. He hit for one and made another Piledriver. Walls continued to play lands. Tait played a Burrows and swung in with both. Walls showed him a Shock, and Tait decided to let it stay at just one damage. He cycled away a Gempalm Incinerator and gave it back to Walls. He continued to build his mana. Tait started hitting for three a turn. Soon Walls tired of the Piledriver and Sliced it away. Goblin Warchief put Walls to seven. Walls was “stuck” at six land, obviously anxious to get a Form into play. Chain of Vapor sent the Warchief home on the next attack.

“Your deck has Decree of Silence, doesn’t it?” – Geordie Tait

Tait replayed the Warchief, and Walls cycled a Complicate at end of turn. It served up the land he needed, and he slammed down the Form. Tait untapped, shrugged, and laid three Shocks on the table.

“They let a hobo in the building? Oh, that’s Gabe Walls!” – Osyp Lebedowicz

“You didn’t have to play a single spell that game before those Shocks. Shock shock shock!” – Gabe Walls

“If I never played anything, you might have suspected.” – Geordie Tait

“Nope! I would have raw-dogged it from twenty.” – Gabe Walls

“Geordie, you’re getting him at the right time. His DCI rating is still really high.” – Antonino DeRosa

They shuffled up for the second game, and Tait declined a cut on Walls’s deck. They both mulliganed, and again Tait refused a cut.

“Are you ever gonna cut me?” – Gabe Walls

“No, I trust you completely.” – Geordie Tait

“That might be the biggest mistake of your life.” – Gabe Walls 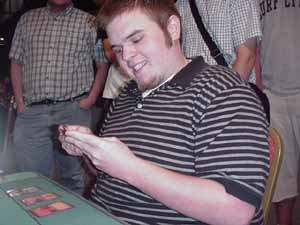 Tait got the ball rolling with a Goblin Sledder on the second turn. He tried to hit for three on the third turn, but Walls Sliced it away. He untapped and showed the Vegetation, giggling at his excellent draw. Tait returned with Sulfuric Vortex, ahead on life thanks to Walls’s Grand Coliseum. Walls busted out a big Silklash Spider.

Tait tried to answer with Siege-Gang Commander, but Walls had the Starstorm. He hit for two and gave it back. They played the same drama again on the next turn, but this time Walls had Naturalize for the Vortex. Goblin Goon forced Walls to sit home, and he played another Vegetation. Tait brought out another Vortex. Walls could do nothing but play another explosive Vegetation.

Avarax hit the ground running and Tait’s team charged. The Spider blocked the Goon, and Tait had a Shock to finish it off after combat. The Vortex brought Walls to just five. Things were looking grim. He thought hard, then cycled Slice & Dice. He shook his head, and offered Tait the hand.