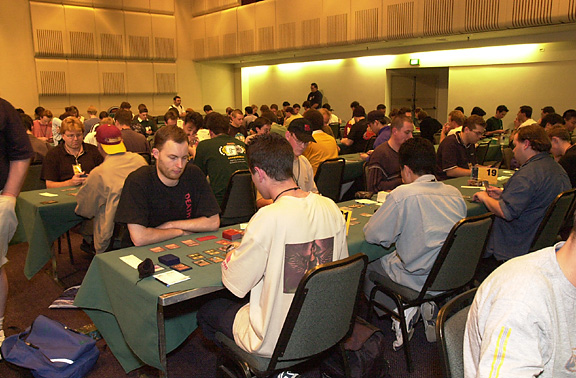 With both players having two byes, round 3 saw their introduction to the GP Sydney tournament. Fong is well known for his ability in Constructed events, having an amazing record at Australian Nationals, while Hart is no slouch either. He played a Mind Over Matter deck in 1999, taking him to Worlds on the Australian national team. In this match we see a common pairing in the extended environment, Trix vs. Counter-Sliver.

After both players mulliganed their opening hands, Hart drew into what is almost the perfect Trix hand, with 3 land, a Necro, a Mox Diamond and a Brainstorm. When Fong tapped out on turn 2 to summon a Crystalline Sliver, Hart saw his opportunity, Brainstorming and then Vampiric Tutoring to get a Misdirection in case Fong had the Force of Will. Hart then untapped, cast the Necro and Misdirected the Force that Fong did indeed have, then after Necroing for 11 he turned the turn over to Fong. All Fong could do on his next turn was attack with the Sliver and lay another land. Hart then had to Consult for an Illusions, having not drawn one in the 11 cards, but it proved to be his downfall as it removed 3 of his Force of Wills from the game. He then cast the Illusions, Necroed for 12 more and ended his turn, leaving 8 cards in his deck. Fong untapped, drew, and then Consulted for a Seal of Cleansing, which he attempted to cast. Fong was surprised when it resolved, sacrificed it to remove the Illusions, and took game one. Unfortunately for Hart all he has was able to draw from the Necro was a Misdirection.

Again Hart had an amazing draw with a first turn Duress, however when he saw Fong's hand he was shocked. Fong had drawn the opening hand of two Muscle Slivers, Counterspell, Pyroblast, Duress, City of Brass and Tropical Island. Hart simply sighed and took the Duress. When Fong tapped out to summon a Muscle Sliver on turn 2, Hart thought that his Necro would be safe to drop on turn 3, but Fong had drawn a Force of Will. Fong then untapped, cast a Hibernation Sliver, and attacked again with the Muscle Sliver. Hart then cast a Phryexian Negator in an attempt to make Fong take a less aggressive stance, however when you're short on permanents, Negator isn't the best thing on wheels. Fong then dropped the second Muscle Sliver, while Hart stared at the Massacre in his hand that he was unable to cast, being short on land and with Fong without a Plains in play for the alternate cast.