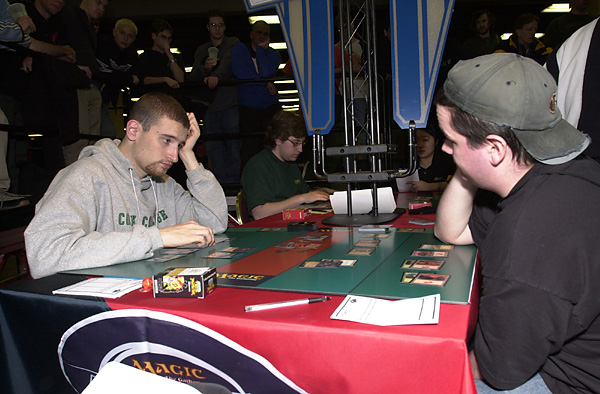 Jon Finkel was worn out. A full day's worth of Magic had put him at the top of the standings for Pro Tour Chicago. Before he could rest, however, he had to draft and play the first round of the final eight for the Chicago Masters. It might not be a coincidence that he drafted a Black/Red deck focusing on playing early creatures and removing opposition. Packing many powerful spells, including Ghitu Fire, he felt he was in good shape.

Mike Bregoli was less pleased with the result of his draft. With his neighbors cutting off the colors of his early picks, he was forced into a R/G/w deck featuring few tricks. He didn't like his prospects, calling his deck "Just a bunch of guys, not very good", but put on his game face nonetheless.

Game one was a complete fracas. Both players stuck to their offence, casting quality creatures and attacking all out. Finkel's removal-rich deck didn't seem to be delivering the goods, only a Mourning for Bregoli's Razorfoot Griffin, and Bregoli's Serpentine Kavu gave him little option but to trade his Cinder Shade for it. Both players slowed their play, analyzing the board carefully. 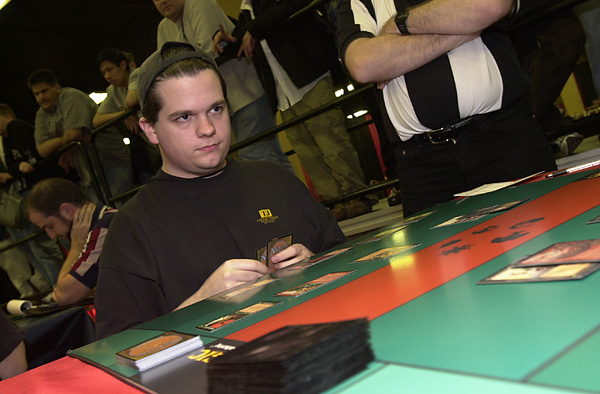 With both players at low life, Bregoli had a Thornscape Apprentice locking up Finkel's Maniacal Raged Phyrexian Battleflies. Finkel attacked with his Urborg Phantom, and Bregoli let it through, leaving himself at three. Finkel couldn't capitalize. He mustered a Phyrexian Slayer, but that left him only two blockers to Bregoli's Kavu Climber, Kavu Scout and Apprentice. Finkel traded his Slayer for the Scout, dropping to two life. Bregoli played Keldon Necropolis and finished him off.

Game two was more of a slaughter. Finkel played an early Firebrand Ranger and used Reckless Spite to remove Bregoli's first two creatures, following that up with Phyrexian Reaper. Bregoli saved the best for last, casting Thornscape Master. Finkel Soul Burned it away, and sent the crew again. Bregoli Harrowed to thin his deck and summoned a Razorfoot Griffin. Again Finkel was ready, this time with Mourning. Bregoli summoned a desperate last stand, in the form of Rogue Kavu and Sparring Golem, but Finkel had turned his removal all the way to eleven, casting Cursed Flesh and Agonizing Demise to pave the way to victory.

Game three began more like game one, with unopposed creature combat. Bregoli stepped into the Think Tank on his third turn, facing down a Firebrand Ranger and an Urborg Phantom with only a Benalish Trapper. Eventually, he decided to tap out for Kavu Runner and attacked. Finkel returned the favor and summoned a Phyrexian Slayer. Bregoli sent in the clowns and cast a Serpentine Kavu. 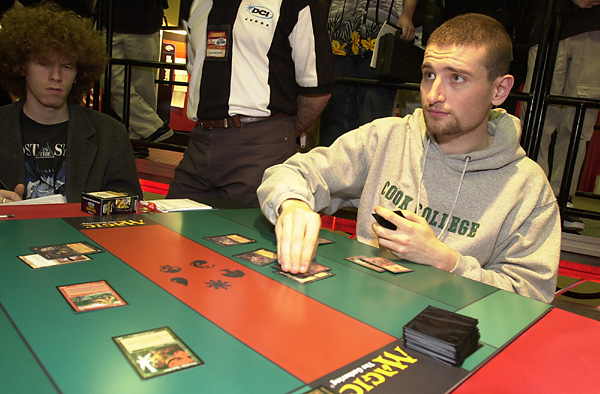 Finkel went for the gusto. Doubling up Maniacal Rages on his Phantom he attacked for nine. Bregoli took it and stepped back into the Tank. His final plan was to attack with the Serpentine and Runner, playing out Keldon Necropolis and Kavu Scout, hoping Finkel had no removal. Finkel played out Cinder Shade, pumped it to 2/2 and removed the Scout, attacking for the win.