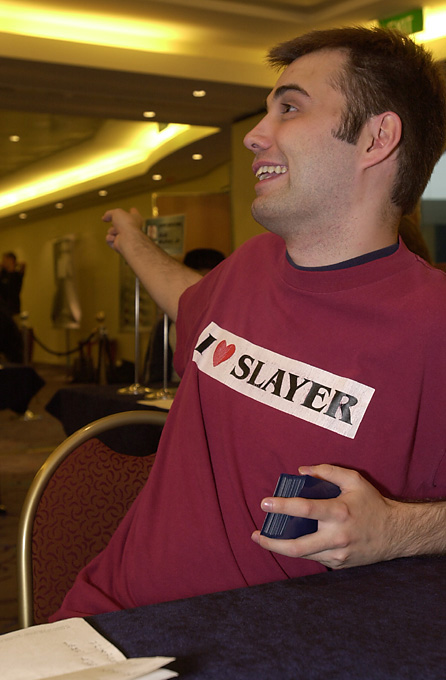 It was 2-0 versus 2-0 and a rematch of last year's finals when Chris Pikula and Jon Finkel met during round 3. These two teammates and friends played a really fast match with Dave Humpherys watching over Chris's shoulder.

Finkel mulliganed away a draw with 6 creatures and one land while Pikula seemed happy with his own draw - 6 land and a Tawnos's Coffin. Finkel had quite a beatdown going as he played out Groundskeeper, Hyperion Blacksmith, and Depwood Tantiv over the first four turns. Pikula played nothing but a Spidersilk Armor. Finkel poured on the heat with Hunting Moa - the most played card in the format. Pikula played out his Coffin, but he never did draw a creature and he succumbed to Finkel's beatdown quite quickly. Pikula started complaining about his draw and Finkel just answered "I played cheap spells." Pikula then went to his sideboard and brought in both Thran Forge and Aladdin - cards Finkel recommended to him after deckbuilding.

Game 2 was also fairly quick - the players were very comfortable playing against each other and looking forward to lunch. After they traded Blacksmiths, Finkel played out Aladdin and Maro. Pikula used Avalanche Rider to destroy one of Finkel's two Forests. Finkel promptly dropped Groundskeeper and got it back, beefing up Maro at the same time! When Finkel added Arctic Wolves to his attack, Pikula was complaining about drawing all his Mountains along with only one Swamp and one Forest. Finkel's beatdown was too much, too fast and Finkel completed the sweep. 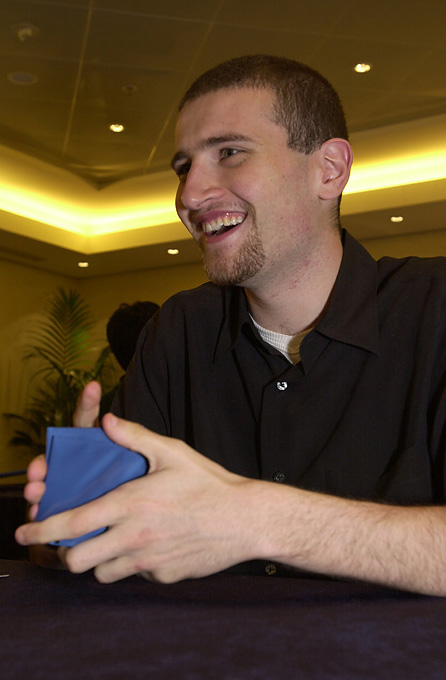 Jon Finkel is renowned to be a blue player, but he went totally aggro in this format and it was the right call. "I never even drew Wild Mammoth - and that guy is the best card in the format!" With everyone else playing expensive cards and tying to set up various combos, Finkel built a 2-color beatdown deck that just tried to attack for 20 while everyone else worried about their third color or all the expensive cards in their hand. Make no mistake about it - Jon Finkel understands how to win at this game better than anyone else in the world.